Famous Fairs and Festivals of Bhutan

Bhutan is undoubtedly one of the most spectacular places on earth. The country is well-known for its culture, heritage and the lush green topography of the fertile Himalayas. But many may not be aware of the fact that it is actually most famous for its high-spirited religious festivals known as Tshechus. Almost every temple or Dzong as they are referred to as in the country holds a Tshechu every calendar year.

The word Tshechu roughly translates to mean the ‘10th day’. Each temple hosts their Tshechu on different months, but the month of every Tshechu is held on the 10th of their selected month. The tradition is to honor the Buddhist monk Guru Rimpoche who was born on the 10th day of the month in the 8th century. The Tshechus are celebrated to honor him as the 10th day of the month corresponds to his birthday. Tshechu’s are significant events in the Bhutanese calendar with entire villages and cities coming together to sing, dance, and drink and receive blessings, in the spirit of the festival

The people in Bhutan believe that every single person must join in at least one masked dance in a year to wash away their sins. The largest Tshechus are held in the big Bhutanese cities like Paro and Thimphu and are absolutely spectacular celebrations that every traveler must witness in their lifetime, thousands turn up for the event, so early bookings is strongly advised. Here’s a list of the most spectacular Tshechus is Bhutan:

The Paro Tshechu is the most popular one among the rest as it is a massive festival celebrated in the heart of the economic hub of the country. It is by far the biggest spring time celebration in Bhutan and attracts millions of celebrators from around the country as well as the world who gather to witness the beautiful display of colors, costumes, art and dance. You can catch great photographic moments of thousands of people gathered in the city to socialize and dance in pure joy and celebration.

Both citizens as well as monks dress up in dazzling brocade costumes and re-enact famous legends of Buddhist Bhutan. They adorn themselves in intricate face masks that also refer to Buddhist legends and Bhutanese mythology with similarity in the art-style with Indo-Chinese costumes like that of Chinese formal opera.

The highlight of the festival is usually seen at the end of the festival when a Thangka (Buddhist religious scroll) of length as high as a 4-storey building is unrolled in celebration. This relic scroll is said to be more than 350 years old and is an object of great historical and cultural significance. Get Complete Info : About Paro Tshechu Festival 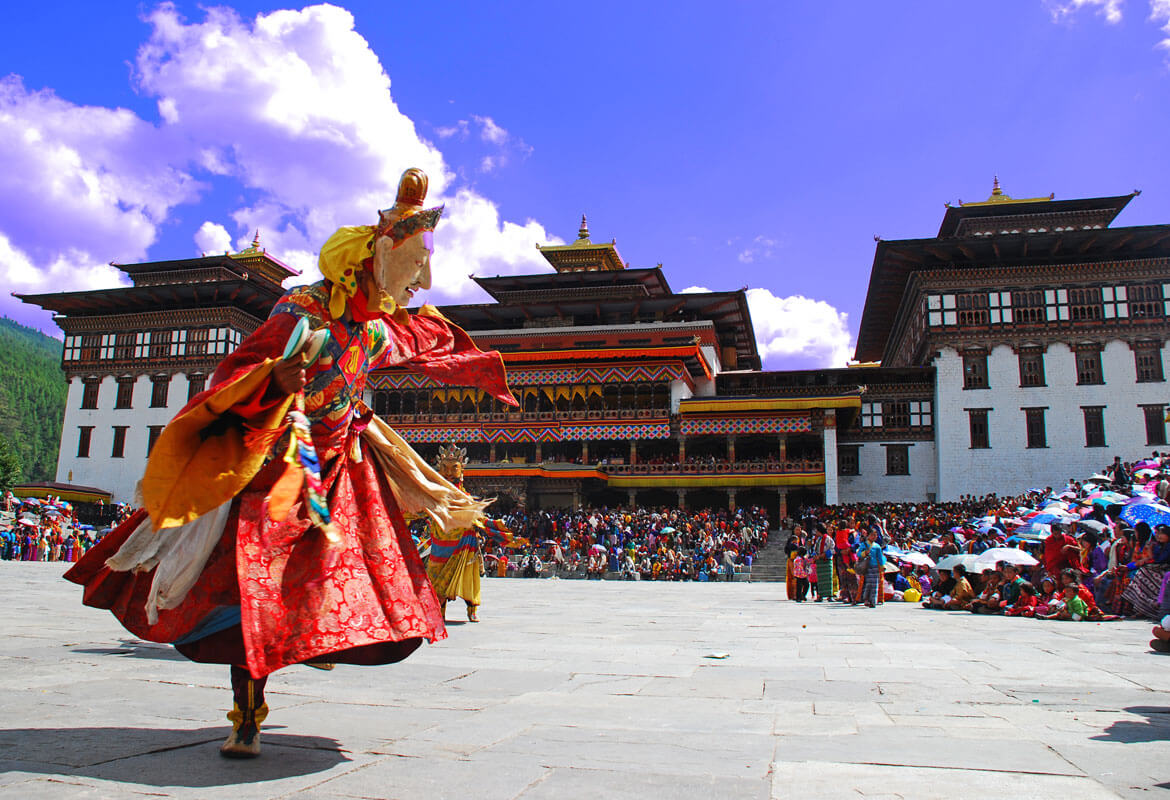 The Thimphu Tshechu is one of the grandest of all the celebrations, given the fact that Thimpu is the capital city of Bhutan. The festival attracts thousands of attendants, creating an atmosphere that is electric and unforgettable to anyone who witnesses the energy.

Those seeking to travel to Bhutan at the time of the festival must plan ahead as accommodations get booked much ahead of time. The festival usually takes place from 10th – 13th August. The 3- day festival is a public holiday for the people of Bhutan; huge stages are erected in the courtyard of the Tashichho dzong for dance and performances. The 3 day Tshechu is actually followed by several days and nights of offering prayers at the Dzong. The Jambay Lhakhang Drup festival is one of the most popular among the rest as it bears host to what is aptly known as the ‘fire ceremony’. The coveted festival attracts tourists and visitors from all around to bear witness to this vibrant celebration. The 5 day Tshechu is an incredibly colorful and flamboyant display of song and dance and performances where attendees are seen running underneath large flaming gates ad late-night celebrations with nude masked dances in the middle of the night.

If you want to witness something unforgettable, then the Jambay Lhakhang Drup festival may just be for you. It is a celebration of life in all its eccentricities and is still one of the hidden gems in terms of festivals in Bhutan.

The Mountain Echoes festival is a fairly new event in the list of festivities, which is presented by Jaypee Group, an initiative of the India - Bhutan Foundation. It is held in the capital city of Thimphu, Bhutan. The festival is celebrated under the patronage of Her Majesty the Royal Queen Mother Ashi Dorji Wangmo Wangchuck.

As a contemporary celebration of modern Bhutan it is a melting pot of thoughts and ideas, celebrating a wide range of art including literature, photography, visual arts, theatre, and music, film, and dance performances.

The festival also forms a platform for cultural and social exchange on current topics of globally relevance and social significance. It is usually peppered with eminent speakers from other countries like the United States of America, Australia, United Kingdom, France, Switzerland, Czechoslovakia, Bangladesh and Nepal, along with speakers from India and Bhutan. 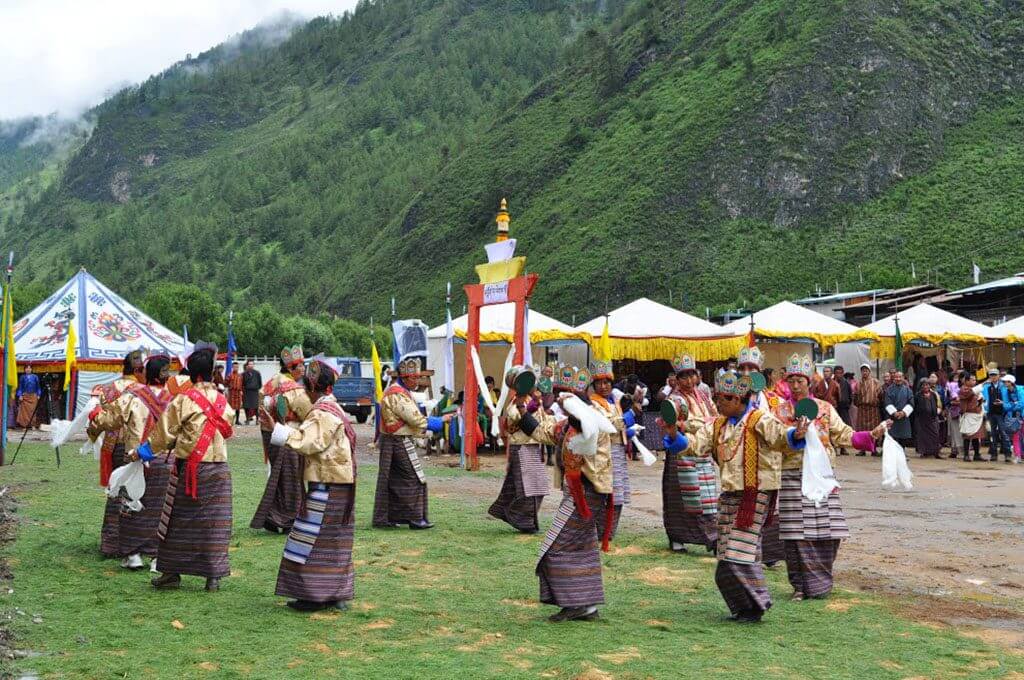 The Haa Summer Festival is one of the most stunning celebrations as it is set within one of the most spectacular natural settings! Lush greenery, large rolling valleys and sparkling lakes set up the perfect spot for some good spirited celebration and song and dance. The festival offers a different perspective to the culture of Bhutan as it depicts and celebrates the nomadic lifestyles of the native Bhutanese and pays homage to their traditional livelihoods.

The festival is the perfect event for culture-o-philes who want to get a closer look at this old-world culture and learn about its rich history. Feel free to tap along as you take a few sips of a drink or two and the hearty folk music beats help your feet get tapping in glee!

Some other popular celebrations in Bhutan include, the Black-Necked Crane Festival, Wangdue Phodrang Tshechu, and the Punakha Tschechu and Drubchen, which are all unique in their own way and are truly reflective of the spirit of Bhutan and its peace-loving and nature-loving Buddhist roots, with vibrant display of colors, song and dance.