Soaking in the Purifying Waters of Tapt Kund

Ancient Indian culture is popular for its many pilgrimage and holy sites, which are considered to be very powerful and effective in curing one’s ailments and sins. From generations, people follow the tradition of visiting such sights and their faith on these religious locations is immense.

One such famous site, which has a lot of prominence even in Hindu mythology is the Tapt Kund or the holy pond. Located just below the Badrinarayan Temple in Badrinath, on the banks of the divine Alaknanda river, Tapt Kund is a natural hot water spring and is popularly known as the adobe of Lord Agni or the Fire god.

The water in Tapt Kund, is supposed to have medicinal properties which is helpful in curing people of their skin diseases and other ailments. It is also believed that, taking a holy dip in the Kund, before entering the Badrinarayan temple premises, will purify a person and make him get rid of his sins.

Therefore, the Tapt Kund is always crowded with several number of devotees who want to experience spiritual rejuvenation and benefit from the therapeutic properties of water in this Kund.

Mythological Story Behind the Formation of Tapt Kund

Most of the religious places in India have a legend attached to them and Tapt Kund also has one. So according to the story Lord Vishnu, who was extremely pleased by the deep penance taken up by Lord Agni granted him a boon, that allowed Agni Dev to permanently reside in the Tapt Kund and make it his home.

So, till date it is believed that Lord Agni resides in the Kund and releases these hot springs which greatly helps the devotees.

Another legend describes Tapt Kund as a religious place from where one’s soul would depart in peace to reach heaven. So, if a devotee performs rituals after the death of his ancestors in Tapt Kund, it is believed that the soul departs peacefully to heaven and rests in peace.

Water Temperature and Division of the Tapt Kund

The water temperature in Tapt Kund is around 45°C and keeps varying throughout the day, depending on the season. The entire bathing area of the Kund is around 17 feet by 15 feet and it also has different sections for men and women. So, one can enjoy the holy dip without feeling worried about the freezing temperatures outside the Kund and also, the hygiene levels can be maintained. 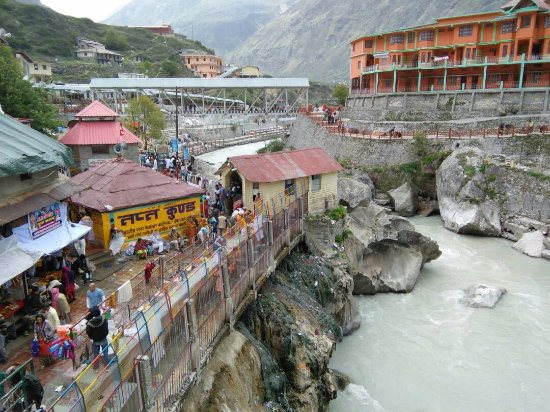 At a close proximity to Tapt Kund, lies two other Kunds named the Narad Kund and Suraj Kund. Obtaining its name after Narad Muni, Narad Kund is considered to be a very sacred pond in Hindu mythology as it is believed that, the current image of Badri Narayan which is placed in the Badrinath temple, was discovered in the Narad Kund, by the famous saint Adi Shankaracharya.

Apart from that, there are five big stones placed around the Narad Kund called Panch Shilas, which are believed to possess sacred powers and hence are highly worshiped by the devotees and tourists. Therefore, ‘Agni Teerth’ or bathing in the hot springs is a very auspicious process for many Hindus and a spiritual method of cleansing oneself of all the sins that have been committed.

How to Reach Tapt Kund?

Tapt Kund is located in the famous town of Badrinath, which is well connected to other major places in Uttarakhand. So, connectivity is not a big problem and one can use either the road, rail or air transport to reach Tapt Kund.

Dehradun’s Jolly grant airport is the nearest connecting airport to Badrinath and lies at a distance of 312 kms. So, once you reach Badrinath airport, you can hire a taxi or a bike which are easily available at the airports and reach the temple through motorable roads.

If one wishes to travel by train, the railway station at Rishikesh, which is 293kms from Badrinath is a good option.

Badrinath can also be reached by road from the nearest bus station of Joshimath, which is around 42 kms from Badrinath. Also, several local buses offer services from New Delhi to Rishikesh, Haridwar and other major towns of Uttrakhand, from where you can hire a taxi to Badrinath.

Once you reach Badrinath bus stop, the Badri Narayan temple is 400 meters away.

What is the Best Time to visit Tapt Kund?

The ideal time to visit this holy destination is from the months of March till June. During these months, the weather is very pleasant, and the climate is pretty favorable too.

You can avoid rain and other natural calamities like roadblocks and heavy snowfall, which usually is a big problem during the monsoon and winter seasons. So, plan your visit during the summer months and enjoy being at Tapt Kund to your maximum best.

Some Other Places which you Can Visit Near Tapt Kund

The innumerable tourists who come to visit Tapt Kund, are also attracted to the some of the exciting and amazing sightseeing spots, that surround the Kund. Among the many scenic and splendid spots, the Badrinath Temple is the most famous one and is buzzing with devotees and tourists all through the year.

Apart from the main temple, the Charan Paduka, a holy rock, which is supposed to have footprints of Lord Vishnu, the Neelkhant peak, which is perched at an altitude of 6507 meters above the sea level and the Bheem Pul, which is a big stone bridge placed above the tremendously flowing Saraswathi river, are some must visit locations, which offer some breath-taking views and complete your journey to Badrinath.

Promising to impart miraculous healing properties and a refreshing experience, the Tapt Kund is certainly a divine place. Also, as it is very close to the Badrinath temple, one does not even have to walk a lot or travel to a different location. So, you should certainly include Tapt Kund in the list of sights to be covered in Badrinath and get some good therapy in its magical water.