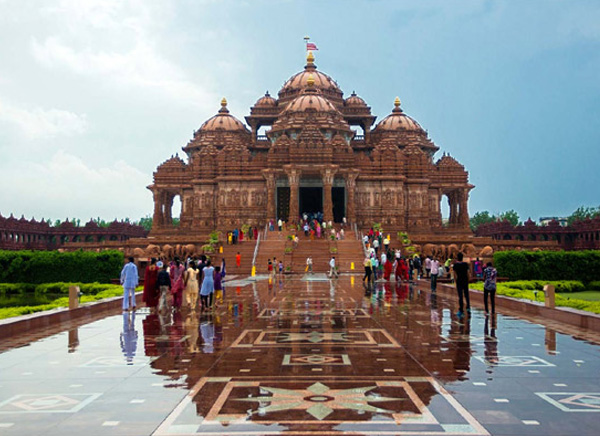 Akshardham complex is a Hindu temple and a spiritual campus located in New Delhi. The complex was constructed in 2005 in Noida Mor region of New Delhi. 70% of tourists who visit Delhi, visit this temple complex.

Located on the banks of River Yamuna, this temple is a beautiful place for sightseeing, exploring and pilgrimage.

This complex does not hold a temple alone. It has a water show, a theme garden, hall of values, IMAX film of Swaminarayan’s life, cultural boat ride and much more.

The main attraction of the complex is the temple, which is beautifully decorated with carved statues of dancers, deities, fauna, flora and others.

This temple is built with Rajasthani sandstone (pink color) and Italian Carrara marble. This temple holds 234 pillars, 2000 deity statues, nine domes and much more. The temple holds 148 life-size elephant statues that weigh a total of 3000 tons.

How to Reach Akshardham Temple

The best way to reach the temple complex is through metro. The nearest metro station is Akshardham, which is right outside the temple.

You can also find buses, taxis and autos from various parts of the city to reach the temple. It is quite a popular attraction and thus, reaching the temple is not a hard task.

The temple is open throughout the year. Since most of the exploration should be done on foot, it is better to avoid summer. Summer starts in March and ends in June. Summers are hot, humid and dehydrating.

It is better to visit in the late afternoon, as you will have enough time to explore all the attractions and be at the musical fountain right in time for the show.

The temple is open from 9:30 am to 6:30 pm. The exhibition tickets are sold between 10 am and 5 pm. There is no charge for entering the complex.