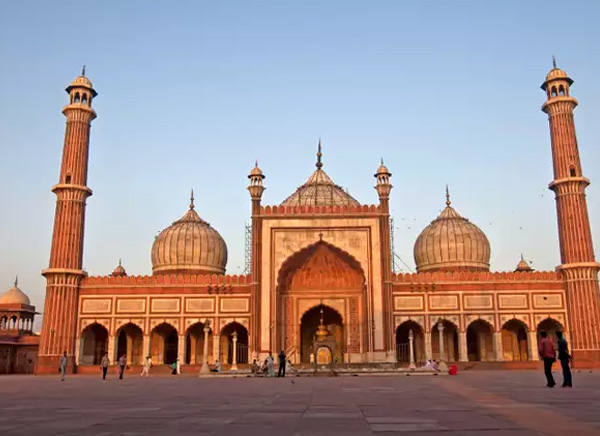 An excursion of Delhi will be incomplete without a walk through the walled city of Old Delhi. It was founded as Shahjahanabad by the Mughal Emperor Shah Jahan and has maintained the Mughal character about it till yet in some forms.

You can find Havelis from the yester years, alleyways dotted with traders who have been there for generations, homes in old style construction not renovated to the match with the contemporary Delhi etc.

As you walk through the gullies further and explore the soul of Delhi 6, we suggest that you shouldn’t miss out on an opportunity to visit the Jama Masjid. It is situated in the heart of Old Delhi and is one of the largest mosques in India. It is one holy place deeply revered by the city people and all incoming tourists alike. It is one of the striking features of the walled city and it is here that thousands of people gather to offer their prayers and to conclude their fast during Ramazan days.

To be precise with numbers, the courtyard can accommodate 25,000 people at a time and Eid days look like the days of mass merry making! Spectacular, isn’t it?

Who Built the Jama Masjid?

Going back in time, this mosque was commissioned by the Mughal emperor Shah Jahan and over 5000 workers completed its construction. It was originally called as Masjid-i-Jahan-Numa which translates to “mosque commanding view of the world” (it is built as such that it overlooks the Red Fort) but popularly it came to be called as Jama (Friday) Masjid.

Some interesting architectural features adorn the Jama Masjid and are worthy of being paid attention to like the floor being done in black and white marble to resemble a typical Mosalla (prayer mat) for offering Namaz.

Among other notable features are the three entrance gates (Eastern, Northern and Southern Gate) and two tall minarets (precisely 40 metres high) - the minarets were done in strips of red sandstone (a regular raw material in the construction of many famed Mughal monuments) and white marble, adorned by winding steps and cupola at the top for a panoramic view of the city.

The main courtyard has an ablution tank made of marble where the devotees wash themselves before settling for the prayers and because time is very important for offering Namaz so there are two sun dials in the courtyard for the purpose of indicating prayer time...

History is a testimony to the fact that the architecture of Jama Masjid was very iconic in the sense that it is believed to be the inspirational architectural prototype for Badshahi Masjid (built by Shah Jahan’s son Aurangzeb in Lahore) and talking more about its significance, the mosque houses collection of relics of Muhammad- the Quran written on deerskin, red beard hair of the Prophet and also his sandals and footprints on the Northern gate placed in a cabinet.

Seeing the mosque now, it proudly stands as a symbol of love and brotherhood in the city where cultures have blended in so well and so beautifully. You will not see just Muslims offering their prayers here but other religious groups also hold Jama Masjid at a special place in their hearts.