From late April, flocks of pilgrims start their journey towards the four spiritual abodes for salvation. This journey is the ancient Chardhamyatra, coined by Adi Shankararcharya in 8th century. Including Saint Adi Shankaracharya, numerous mythological legends and kings attained salvation via these temples, according to mythology.

Even if you are not into mythology, the circuit is mesmerizing, refreshing, and a unique experience to try.

Chardham is open only from summer to autumn, which starts by late April or at the beginning of May (changes every year based on the lunar cycle). The peak season is from May to June and from October to November.

The monsoon season which starts in July and ends in September is not an ideal time to visit the region receives heavy rainfall. Heavy rainfall might lead to landslides or slippery trails.

Chardham yatra is a circuit covering four ancient and sacred destinations like source of River Yamuna (Yamunotri), the origin site of River Ganges (Gangotri), the abode of ruler of Kedar (Kedarnath Dham), and the ancient temple of Lord Vishnu (Badrinath Dham).

How to cover the circuit?

The circuit is not easy to cover as not all destinations have usable road routes. There are two ways to complete this circuit. The first method is the traditional trekking trail. Gangotri and Badrinathdhams have road route connecting numerous destinations to the temples.

Thus, there would be no hardship. On the other hand, the rest of the two dhams, Yamunotri Dham and Kedarnath Dham are not accessible via any road vehicle. Among these two, KedarnathDham has the longest trail.

You can also choose pony rides, but hours of riding a pony isn’t as easy as it might sound. This method takes a minimum of ten days to cover all the four dhams.

The second method is helicopter ride. This helicopter ride takes the pilgrims closer to the temples so that they would be trekking only for a few minutes to reach each destination. If you are choosing the helicopter tour, you would be completing the entire route in two days.

Must Read : Chardham Yatra by helicopter

Pre-requisites for the circuit

Given the hardship that one has to take to reach all the four abode, every pilgrim has to take an online biometric registration. If you are choosing to cover the Kedarnath temple in the circuit, you ought to carry a legit medical checkup report showing that you are physically fit to take up the trekking expenditure.

The geography of the circuit

The circuit usually starts in Haridwar. Some tourists prefer to start from Dehradun, Rishikesh, or Kotdwar.

Climate on the route

The summers are also cold in this route and thus, it is best to wear clothing in layers. After the infamous 2013 flooding in Kedarnath, tourism department has come up with numerous facilities and alarm systems for indicating floods. You can also find accommodation options and many stand-alone sanitation facilities on the route, just for the pilgrims.

Must Read : What is Char Dham Yatra?

River Yamuna is not just associated with Taj Mahal. It is also the second most-sacred water source of the country. River Yamuna is portrayed as Goddess Yamuna, the daughter of Sun God. Yamunotri Temple is found closer to the source of the river. The temple is a much primitive one and you can find road routes up to Janki Chatt, a thermal spring. From there, pilgrims have to trek to the temple.

Yamunotri temple opens on the day of Akshaya Tritiya (April or May). In 2020, it falls on 26th April. It closes on the day of Diwali and the deity is taken to the Kharsali Village, which is considered as the home of River Yamuna’s mother. The date of the Diwali celebration varies from year to year.

How to reach Yamunotri dham?

From Haridwar or Rishikesh, you can find numerous types of road transportation to Hanuman Chatti via Mussoorie, Naugaon, and Barkot. Some pilgrims start trekking from Hanuman Chatti, which is 14 km away from the dham.

From JankiChatt, the trekking starts. Although the distance between Janki Chatt and the Yamunotri temple is 5 km, the trail would wind up to 6.5 km. Some of the routes in this trail are quite steep. It would be very helpful if you had a walking stick. For those who cannot walk for long, you can find mules and palanquins. Remember that 6 km on the back of a mule would be havoc on your back. So, plan accordingly.

After visiting the temple, you can either embark on the return journey to Haridwar or stay in the government bungalows found at Hanuman Chatti, Yamunotri, or Janki Chatti. Most of the tourists prefer staying at Yamunotri to watch the aarti, which takes place in the evening.

The glacier that flows down as the river is around a kilometer from the temple. If you wish to trek to the glacier, remember that the route is extremely hard and it needs avid mountaineering skills.

As the name indicates, this temple is located at the origin spot of River Ganges, the main holy water source of Hindus. This is considered as an iconic spiritual element of the entire country.

The River Ganges originates from Gaumukh and the Gangotri temple is 18 km away from the glacier. This is a small and architecturally simple shrine built closer to the site where King Bhagiarathmeditated to bring River Ganges to the earth.

The River Ganges is a holy site and the origin of this holy site is considered as a supreme destination by pilgrims. Every year, more than 300 thousand pilgrims reach Gangotri temple (for temple visit or as a part of Chardham).

The Gangotri temple’s opening time and closing time are similar to that of Yamunotri temple. The temple opens on Akshaya Tritiya (26th April 2020) and closes on Diwali. When the temple closes for the winter, the deity is taken on a procession to Mukhba Village’s Mukhyamath Temple. This temple is 20 km away from Gangotri, down the stream.

How to reach Gangotri temple?

Most of the tourists do not return back on the same day. They prefer staying back in the government bungalows to watch the evening aarti, which takes place at 8 at night.

If you wish to see the origin of the river, you can trek upstream for 18 km to reach the Gaumukh glacier. The term Gaumukh means mouth of a cow. It might be just 18 km away but it would take three days to visit the glacier and get back to Gangotri. You can find government bungalows at Bhojbasa, three hours away from Gaumukh for night stay.

This is the temple that would test your stamina and yet more than 100 thousand pilgrims visit this shrine, every year. This temple is considered as the holy seat of Lord Shiva. This temple is one of the 12 sacred Jyotirlinga shrines. The Kedarnath temple is also famous as the largest temple in Himalayas and is found on top of a glacial terrace in Mandakini Valley. The glacier on this valley melted several centuries ago.

Kedarnath temple opens earlier than Gangotri and Yamunotri temples. The temple opens on Maha Shivaratri, which falls in February or March. The temple closes on the day after the Diwali celebration.

How to reach Kedarnath temple?

The pilgrimage starts from Rishikesh or Haridwar and the road route halts at Gaurikund, which is 14 km away from the Kedarnath Dham. From Rishikesh, the temple is 12 hours away and you can board buses or private jeep to reach Gaurikund. From Gaurikund, the pilgrims have to take up the challenging uphill trek for six hours until they reach River Mandakini.

After the 2013 flooding, new tent colonies are developed for accommodations for staying at Gaurikund.

Badrinath temple is the most easily reachable temple in this circuit. Dedicated to Lord Vishnu, this temple is located overlooking the Nilkantha peak. 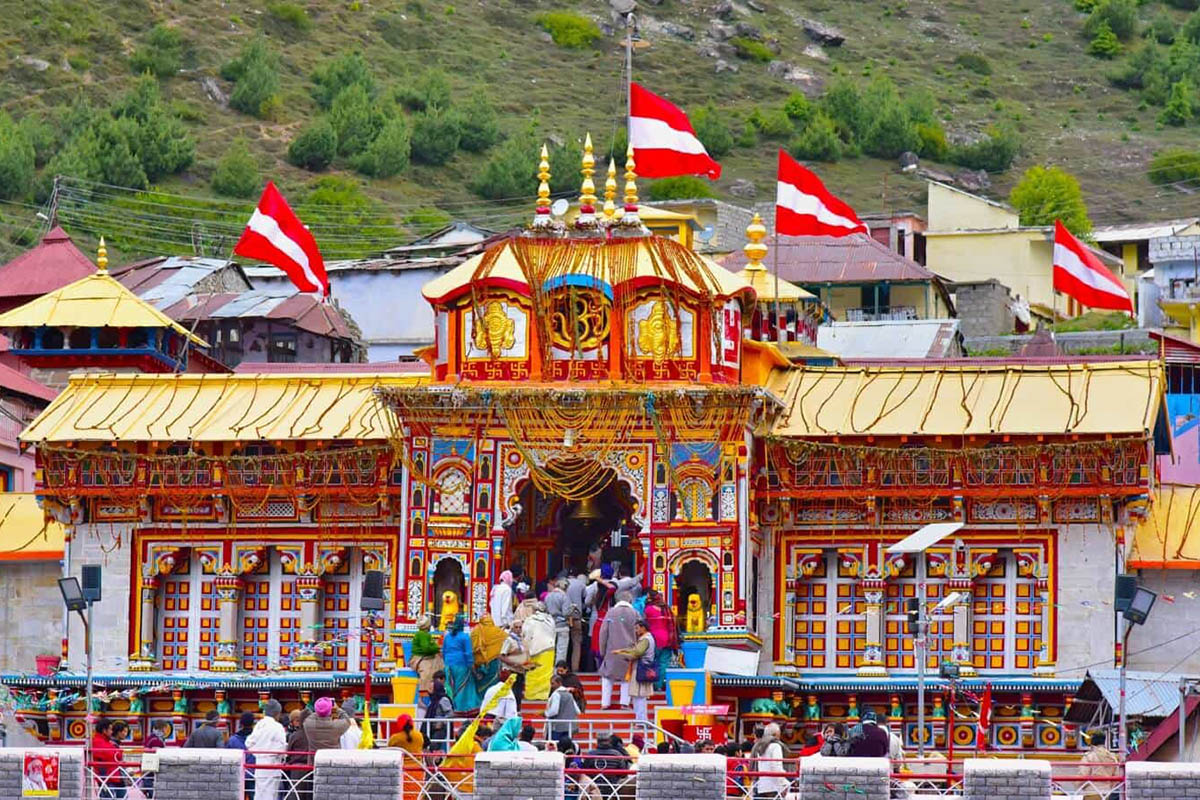 The Badrinath temple is the first one to open in this circuit. The temple opens in February, on Basant Panchami. The temple closes on the day of Dussehra. The temple is also kept open for ten day after the festival of Diwali.

How to reach Badrinath temple?

The temple is reachable via road transportation from all surrounding major cities and the route runs very close to the temple. Usually, people start the trip from Joshimath. If the pilgrims are visiting from Kedarnath, they will have to travel via Sonprayag. Haridwar is around 10 hours away from Joshimath.

You can find buses and jeeps from Rishikesh, Haridwar, and other destinations to Joshimath. From Joshimath, you can find vehicles that would take you closer to the temple.