Following the complete packed water ban in 2016, Sikkim is introducing water bottles made from bamboo for the tourists. Lachen’s population is around 2500 and it attracts tourists in lakhs, every year. With the increase in number of footfalls, the use of plastic was also increasing. To stop the situation, the government ordered a complete ban on packed water bottles. Now, bamboo bottles are becoming a trend.

About the Bamboo Bottle

These bottles are made in Assam. This initiative is supported by Rajya Sabha MP of Sikkim, Hishey Lachungpa. The bottles come from the industry of Dhritiman Borah, an Assamese native. The bottle is made from Bhaluka, a variety of bamboo. A bottle costs around INR 200 to INR 450. According to i-STED, this bamboo bottle is a complex innovation as getting rid of the natural moisture of bamboo is a complicated process.

Introduction of the Bottle

The bamboo bottles were launched in 2019, during Lachen Losar festival. As of now, 1000 bottles are ordered from Assam. This is just an initial order and the Sikkim government assured that the requirement of bamboo bottles will increase with time. Sikkim started the plastic ban initiative in 1998 and by 2016, the complete ban was imposed. 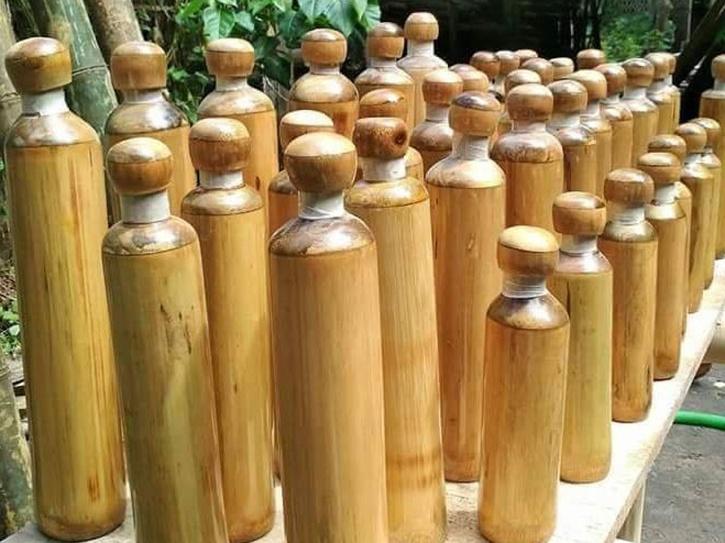 Lachen was picked for this initiative as the number of tourists visiting Lachen is very high. This is a serene hill town located in the northern area of Sikkim. Standing at an altitude of 2750m above mean sea level, this place is the base to the Gurudongmar Lake, Chopta Valley, and numerous other attractions. Lachen is also famous for red pandas, aquamarine lakes, unique culture, and serene climate. Lachen – the Big Pass is a hub for tourists and Sikkim government has chosen Lachen for their bamboo bottle initiative.

To implement this rule, the tourist vehicles entering into Lachen are randomly checked for plastic bottles. The government has imposed fine on locals who use plastic packaged water bottles. Fine for first time offence is INR 500 and for next offences, the cost multiplies like INR 1000 for second offence, INR 2000 for third, and so on. In case of tourists entering Lachen with plastic bottles, the local driving them into the state will be fined.Tourists are requested to leave plastic bottles outside the city. They can choose to transfer the water to the bamboo bottles, which are found in almost all shops now.

After completing this bamboo bottle initiative, the government is planning to stop plastic biscuit and wafer packaging. The state of Sikkim is looking out for innovative methods to implement this, in the near future.

Inspired by this initiative, Kerala is taking similar steps towards a sustainable India. KFRI – Kerala Forest Research Institute is working towards designing reliable bamboo bottles for tourists and locals of Kerala. According to KFRI, the bamboo species in Kerala is thicker than the ones found in Assam, and is not suitable for making bottles. Thus, KFRI is planning to grow thinner varieties of bamboo in Kerala to succeed in this project. The thick bamboo bottles can only hold very less quantity of water and thus, it is profitable and sustainable to use thinner bamboo species.