Sitting on the left bank of Tawi River, it is a magnificent piece of construction believed to be around 3000 years old. It was constructed under the instructions of the Raja Bahulochan. It still stands strong and sturdy against time and many wars in the area. As Jammu itself is the gateway to the Himalayas from Indian side, this fort holds a lot of importance. The Fort has been used over and over again by many rulers.

In the 19 th century it was renovated and extended by the Dogra dynasty kings. They made it even more massive and astonishing while making it stronger at the same time. The Fort is now under the care of government.

The fort is situated on a platform of 325 meters height that makes it visible from far off in any direction. There is a fable about the making of city Jammu, it is believed that Raja Jambu Lochan was out hunting. There he saw a tiger and a goat both drinking water from the same stream, without any fear. He was so impressed that he felt the place was certainly blessed by god himself in terms of peace and calm. So he got the whole city of Jammu settled as his capital, while raja Bahu Lochan his brother constructed the Fort. 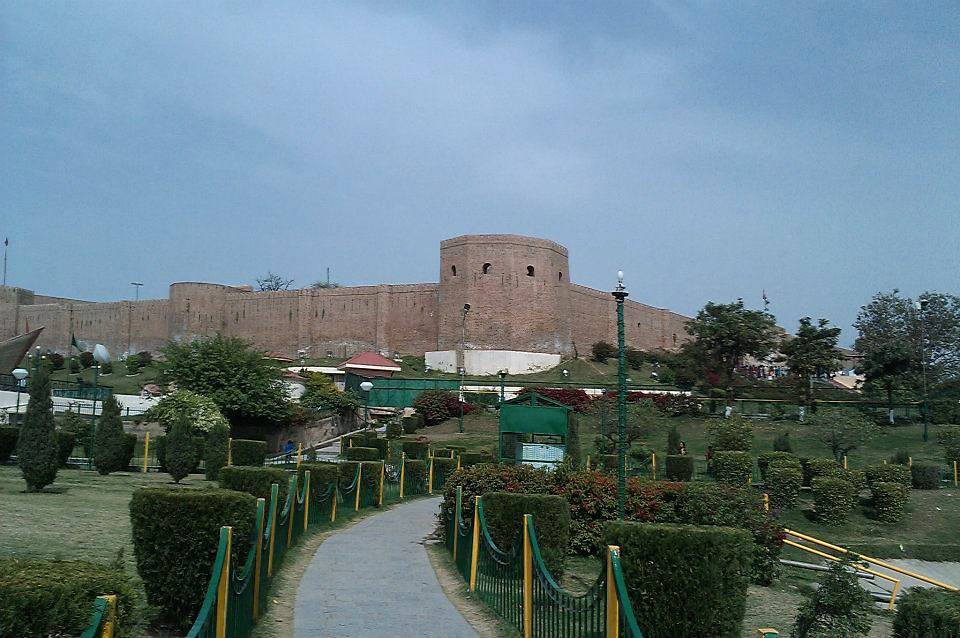 The fort walls were initially made of limestone bricks but at the time of renovation strong sandstone bricks have been used. The entry gate is so grand and big that it allowed elephants to enter and roam around in the premises.

It is believed that elephants were used mostly by kings and queens to visit the vicinity. The walls are very sturdy and had eight hollow large pillar formations for the guards to keep a close watch. A cable car ride has been set up which allows you a fair view of the whole fort in a glance and you can know it better. As most of the well known forts this fort too had a secret escape route in case of a surprise attack by the enemies, but this is closed for the visitors.

The fort houses a sacred temple dedicated to goddess Kali. The temple is locally known as Bave Wali Mata temple. The statue of Goddess is placed on an approx 4feet high platform. The platform is glistening white while the statue of Goddess Kali is made out of black stone. The inner temple space is very small so only a few devotees can go in at the same time. Long queue can be seen outside the temple to worship the Goddess.

There used to be animal sacrifice but since recent past the animals are no more literally slaughtered, rather they are sprinkled with holy water as blessings of the goddess and set free. The Navratri season that is twice a year in March/April and then in September/ October see a high number of devotees thronging the temple. They all enjoy with colour and sweets in the temple premises. There is a holy pond in the vicinity. It is around 20 feet wide and 15 feet deep pond used by the pilgrims to take a holy bath. Tuesday and Saturday see special prayer sessions here.

Another beautiful feature which catches the eye is the Bagh-e-Bahu. The entrance is mesmerizing as it is carved out using living trees and flowers in the shape so trimmed to name the place. The unique choice of plants to create this name gives it a very heavenly look.

People love to stand and take pictures in front of it. A well landscaped garden lies in the fort itself. This is a popular tourist attraction; among the visitors and locals alike. It is somewhat like a mughal garden but nothing to do with the Mughals. The garden has greenery all over the place and flowers of rare species have been used to beautify the garden.

There are lush green lawns to laze around, fountains which increase the aura of this place. Stone structures have been well-placed all over the garden to give it a unique look. There is lake used for boating and also a large aquarium which houses fish of various varieties. There are 24 large and 13 smaller caves in the aquarium.

It holds around 400 different species of freshwater as well as marine fish. It is also believed to e the largest underwater aquarium in the country. Kids enjoy here the most. But remember not to feed fish by any form. This can cause problem for you and them. The fish are kept on a set diet and do not need any stray food. This garden is a pleasant place to spend a day picnic with family and friends. The garden has terraced gardens with water flowing through the middle and fountains in the water. The water is moving and the fountains are colorful. These look even more romantic in the evening when the colorful lights are turned on. In the evening the whole environment is so blissful that you would not like to leave and sit there a little longer. The garden will look like an enchanted fairy tale garden and yourself as prince/ princess.

The fort is open all the year round. But spring is the best season to visit as then you will be able to see the flowers in full bloom and you can sit around and bask in the sun comfortably. As in the winters it is very chilly and summers are hot. So prefer to go there in spring season.

There is a ticket of INR 5 per person on entry of the garden. While for the fort there is an entry fee of INR 10 for adults and INR 5 for children. You must avoid food and any other articles which may create litter around the place. Keep the place clean. Also be advised to take care of your belongings specially cameras as there are many monkeys in the vicinity. The notorious monkeys are habituated at pulling bags or cameras and taking off. Food will attract them more.