Kashmir and Bollywood: A Journey Beyond Romance

Kashmir is synonymous with very many things, with beautiful landscapes, controversial history, culture, food, adventure and so much more.

Apart from being an exclusive travel destination in India that is beautiful throughout the year, Kashmir also holds a special place for Bollywood films.

The Hindi film industry makers have returned to the valley time and again to add the Kashmiri texture to their films' palette.

And, it is not just about romantic songs with lakes and shikara ( a houseboat) backdrops, but many filmmakers have gone on to make Kashmir a character in their films worth exploring.

Some who have done it differently include the likes of critically acclaimed filmmakers like Vishal Bhardwaj, Imtiaz Ali, Meghna Gulzar, and Nitin Kakkar among others.

Vishal Bhardwaj’s Haider starring Shahid Kapoor, Shraddha Kapoor, Tabu, Kay Kay Menon and Irrfan in the lead is definitely the crown of the list. An adaptation of Shakespeare’s popular play Hamlet, Haider was shot across the vast expanse of the autumnal-wintry landscape of Kashmir.

Bhardwaj used not just the locales, costumes, dialect, and traditional music of Kashmir to lend authenticity to his work; he also made his characters fit into the rubric of Kashmiri life and make them look like they belonged only there. A commendable feat in itself!

Imtiaz Ali has shot two of his films prominently in Kashmir; Rockstar featuring Ranbir Kapoor and Nargis Fakhri and Highway starring Alia Bhatt and Randeep Hooda. Although Kashmir was only momentarily present in Rockstar, its rich cultural texture left its mark on that piece of cinema forever. 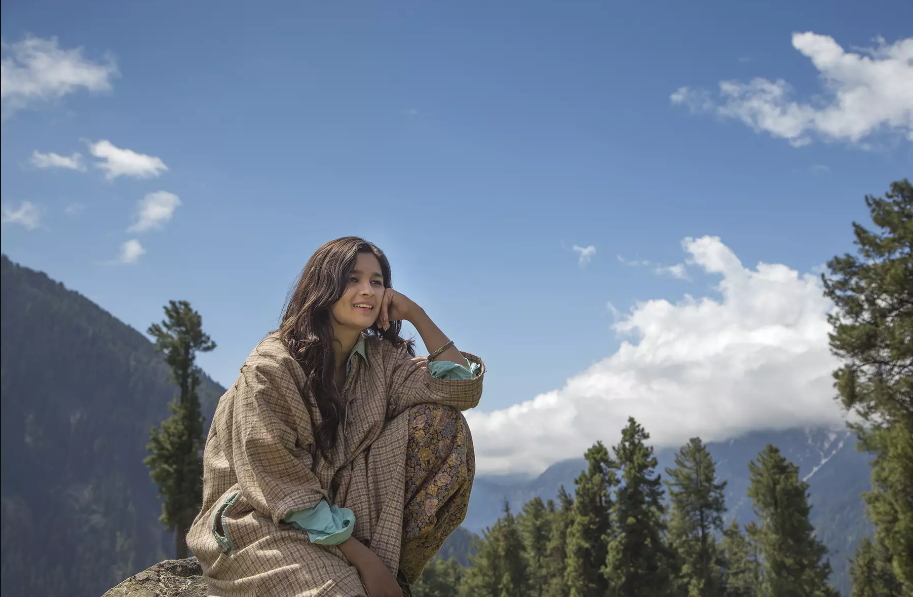 One wonders if an opportunity to see another traditional Kashmiri marriage post Rockstar has happened in Hindi movies.

The filmmaker’s second film that treated all locations it was shot in as people or characters that influence its protagonist’s mind is Highway. Alia Bhatt, who plays the lead role in the film, evolves and is influenced by the natural settings of the heartland of the country as she travels as a kidnapped girl with Randeep Hooda across India.

Kashmir makes its entry in the second half of the film, almost towards its climax. As the journey of Alia-Randeep comes to an end, the Kashmir around them is scenically portrayed complementing the state of their minds.

Meghna Gulzar’s Kashmir in Raazi was old-school in the sense that it portrayed the 70’s of the time. Another Alia Bhatt film shot in Kashmir, though not as extensively outdoors as Highway, Raazi had an aesthetic way of using the valley to complement the film. It was not outdoorish and in your face, but the presence of the Kashmiri ethos could be felt throughout.

Nitin Kakkar’s latest outing with The Notebook in 2019 featuring two debutant actors, Zaheer Iqbal and Pranutan Bahl, is also shot in Kashmir. A remake of the Thai film The Teacher’s Diary, this film is far too visually stunning to take one’s eyes off.

Kashmir’s length and breadth is shot and shown from various angles and the landscape offers a soothing and refreshing backdrop to the story as it unfolds.

The summery-autumnal Kashmiri beauty shines forth in The Notebook and for what it’s worth will keep audiences haunted even after the film is over.

Here is the list of Bollywood movies shot in Jammu and Kashmir such as: