Sikkim is a north-eastern state of India with an amalgamation of people such as ‘Lho-Mon-Tsong-Tsum’ origin of three races and hence you can witness a bunch of fairs and festivals every year in Sikkim.  Sikkim is rich in history and its culture and most importantly people of Sikkim celebrate their festivals with great zeal and devotion.  This place is also home to breathtaking glaciers, their landscape, varieties of flowers. You can encounter a kaleidoscope of colors, diversified culture, and rich traditions through their festival such as Losar, Sakewa, etc.

Sikkim is among the list of the top travel destination because it is surrounded by beautiful monasteries and temples with prayer flags on top of it. With many rituals and ceremonies, that one should not miss the spectacular beauty of this place while on a holiday of this destination. There are many festivals that one can enjoy while on a vacation to Sikkim. Here we have shortlisted 20 festivals and fairs of Sikkim. Check out the list and plan your vacation accordingly. Losar is one of the most famous festivals of Sikkim. Losar is a Tibetan word that means New Year in the English language. This festival is celebrated when the harvesting season end and the farmer get relief and they all come together and celebrate their hard work and patience. Festivals of Sikkim are mostly based on the land and their local communities. Losar is special to Tibetan Buddhists who are residing in Sikkim. Along with all the ethnicity and other things, the rituals of making a mixture of roasted barley flour and butter and its offering on home alter is significant. Losar is basically praying for a good harvest in the current new year. 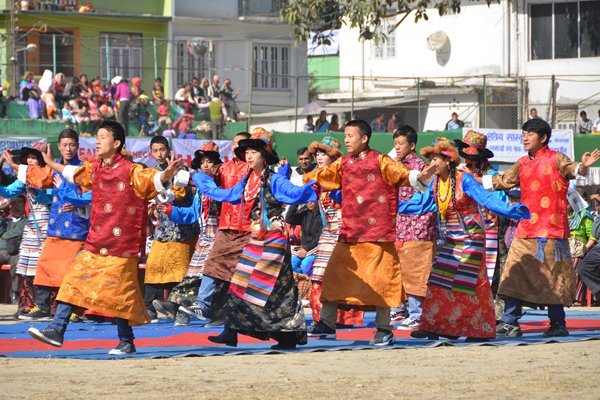 Jorethang Maghey or Maghey Sankranti Mela is one of the widely celebrated festivals of Sikkim which is celebrated with extreme grandeur at the beautiful hamlet of Jorethang every year. Thousands of tourists gather at Jorethang and they take part in the events which include various cultural programs, food carnivals, and sports competitions. Adventurous activities such as paragliding, hot air balloon, and river rafting are also organized at many places. A grand fair showcasing handicrafts and artwork of the local Sikkimese artisan handworks is also a center point of this Mela. 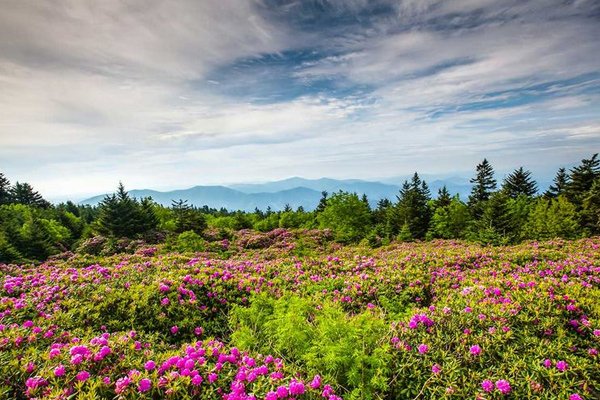 Dentam is a scenic village nearby Mt. Kanchenjunga in the western part of Sikkim. Dentam host the famous Rhododendron festival every year in March. This place is an idealistic festival tour destination for every kind of tourist. Be it a nature lover or an adventure seeker, this place has something for everyone. This festival provides a platform for all the visitors to gain an insight into Sikkimese culture. A music concert, folk dance fashion show, local food carnivals, and yak rides capture all the attention

Time: Month of March every year 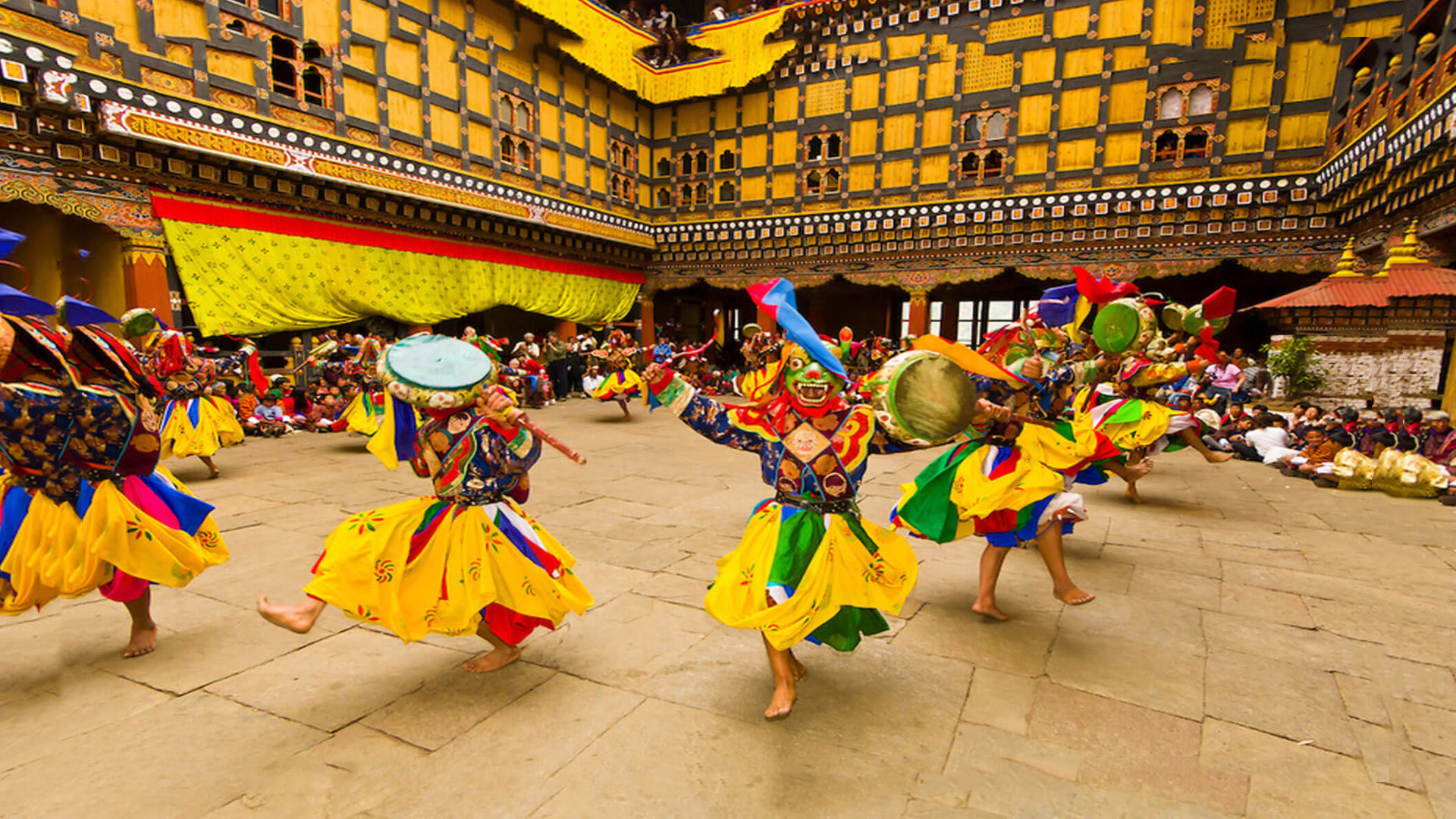 Bumchu means a sacred pot of water. This festival is celebrated in the entire state of Sikkim. It is believed that this festival decides the fate of Sikkim in the upcoming new year and sees a footfall of thousands of tourists every year from different parts of the world. This is one of the prominent and sacred festivals for all the Buddhists in Sikkim and around.

Time: 14th day of the first month of the Tibetan lunar calendar. (Often fall in months of February or March)

Highlight: Sacred pot of water which is opened for public display only once a year. 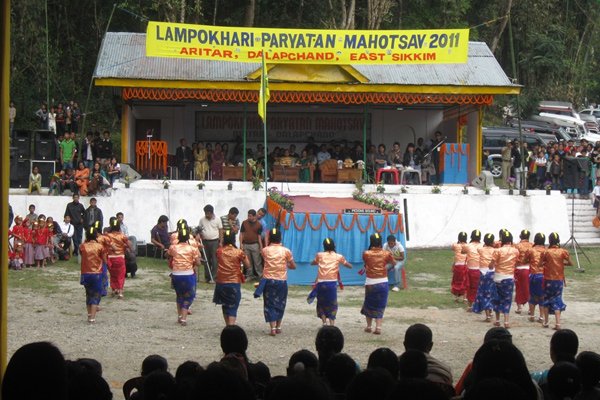 Lampokhari Tourism festival or sometimes also known as Paryatan Mahotsav is one of the most looked at festivals of Sikkim which sees a footfall of thousands of tourists every year. This festival is a tribute to the old social legacy of the state. Regardless of whether you are a social devotee, a nature lover, or an easy-going traveler, you will surely discover something which will remain with you throughout life.

Time: Organized in the Month of April 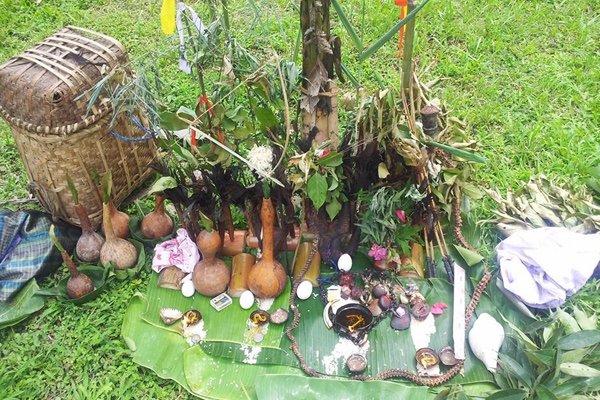 Sakewa is one of the significant and religious festivals of Sikkim. It is celebrated by mostly Kirat Khambu Rai community. This festival is celebrated as a homage to Mother Earth.  Started by performing Bhumi puja and then followed by community dance and other rituals. The entire state of Sikkim came alive during this festival with the sound of drums reverberating in the air, and people from different locations of the world soak themselves in this celebration. It is said that the Kirat people are the most ancient people of the Himalayas. 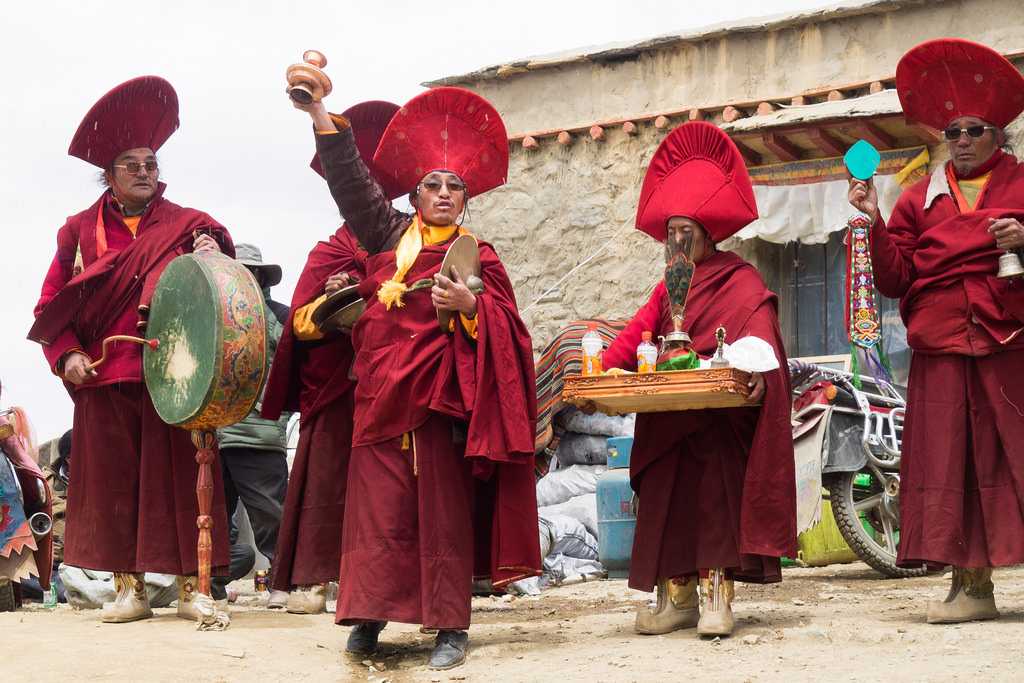 Saga Dawa is the most renowned and one of the greatest celebrations of Sikkim. This festival is praised with huge excitement and enthusiasm. This is the most sacrosanct festival of Mahayana Buddhism, which remember Lord Buddha on this auspicious day. It is believed that Lord Buddha got his fulfillment of illumination and salvation from this bodily world. For all the explorers and devote who are looking for dynamic Buddhist culture, without a doubt this festival is offering a visual treat.

Time: In the month of April and May (full moon day of the Hindu month of Baisakh) 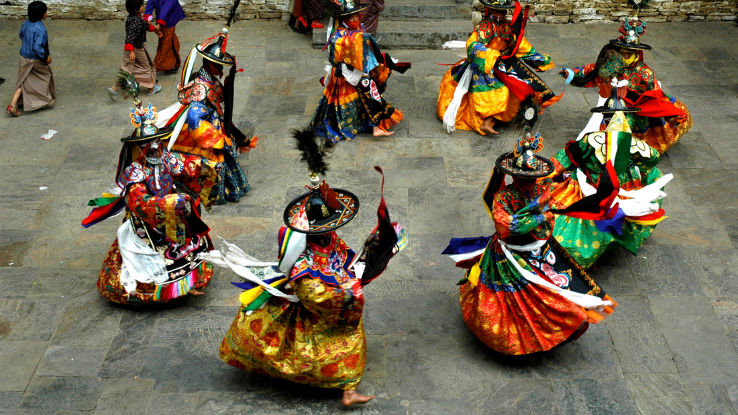 Losoong or Noomsong festival marks the start of Sikkimese New year and is celebrated widely with extraordinary delight across the whole Sikkim. The celebration of Losoong starts with the end of the reaping season of crops.  This festival is without a doubt offer a remarkable Sikkimese culture to the guest and tourist. Losoong offers a customary dance and function also scrumptious Sikkimese cooking. 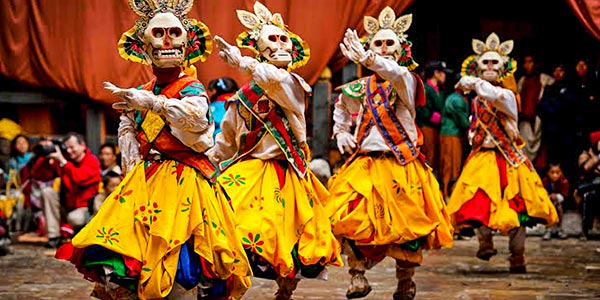 This is one of the most ancient festivals of Sikkim. This festival has its root in ancient times when the ancestors of the local Lepcha tribe were saved by Tendong Hill from a flash flood that last for 40 days and 40 nights. There are grand festivities across the entire state of Sikkim with rituals happening at Namchi which is home to this sacred hill in Southern Sikkim.

Highlight: Trek which goes to these hills from Ravangla. 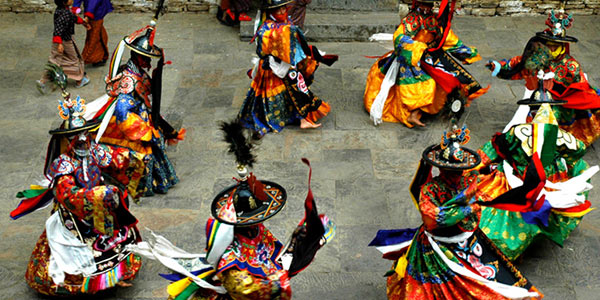 Pang Lhabsol is one of the most popular festivals of Sikkim.  This festival commemorates Mt. Kanchenjunga, the guardian deity of Sikkim. It is believed that this mountain is protecting the very soul of this beautiful state. It is a vibrant occasion with dance performance carnivals and many more. Delicious Sikkimese cuisine is being served. You can plan your trip accordingly.

Highlight: The dance of the lamas. 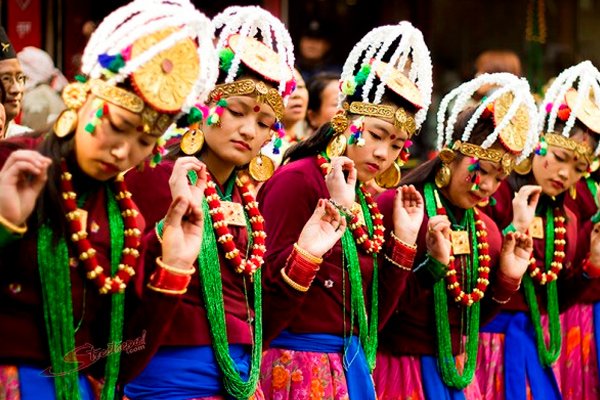 Sikkim amazed its guest, sometimes with its landscape and sometimes with it differed ethnicities and innate gathering.  Sonam Lhochhar marks the beginning of the Tibetan New year. This festival is widely celebrated among the Tamang group. Men and women embellished in their customary clothes and delicious Tamang cuisine is something which is consistently anticipated by the guest.

Highlight: Damphu dance is a major highlight of this festival. 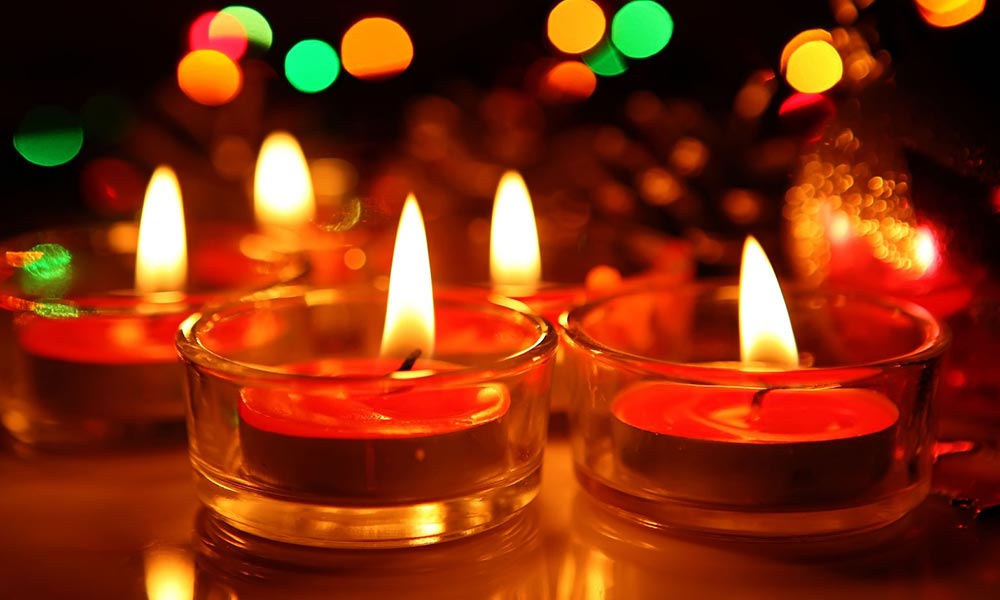 Out of all the festivals which are celebrated in Sikkim, this occasion is on an off-beaten track. These festivals tell many cultural stories of this beautiful destination. Diwali all over India is celebrated here under the name of Tihar. This is a five-day celebration with each day fixated on something special.

On the first day, crows are worshiped which is a symbol of sorrow and sadness awhile on the other day Kukkur (Dog) are worshiped. Each day is dedicated in honor of some of the significant animals in Hindu mythology. Make sure to visit this place while you are in Sikkim. 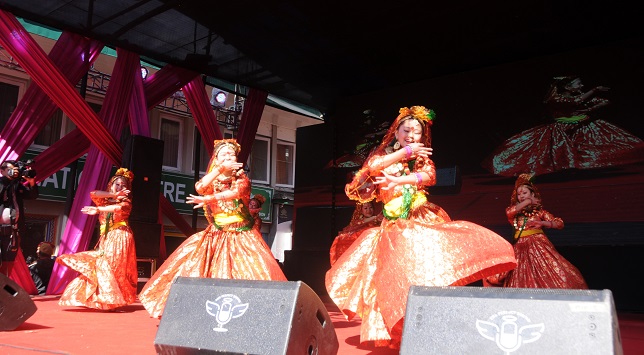 One of the most awaited cultural events in Sikkim is the Red Panda winter festival. This event provided an amazing time to both the local people as well as the visitors from different corners of the globe. One of the major reasons behind this festival is to influx the tourist during the winter months which promotes the state economy, its culture, and cuisine. The preparation of these events starts in advance with the street getting makeover. Resort and Homestays offer special discounts to the tourist during these events.

Time: December – January (Decided and announced by the State tourism board of Sikkim every year) 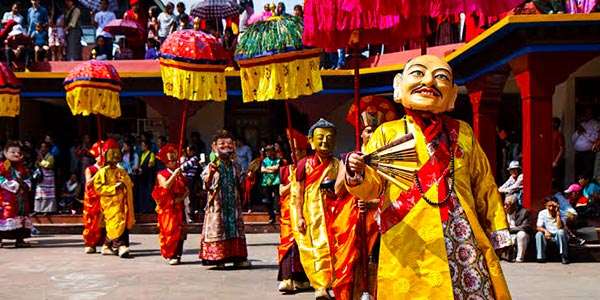 Drukpa Tsheshi is one of the most important festivals of Buddhists around the world. As Sikkim in past was a Buddhist land, this place too witnesses the celebration of this religious festival at a grand level. Numbers of devotees from far and wide travel to Sikkim and attend this festival. For tourists and explorers, this is one of the incredible events that provide them an opportunity to immerse themselves in the vibrant culture of Sikkim and Buddhism.

Time: 4th day of Drukpa months (according to Tibetan calendar)

Highlight: Ceremonies and rituals at various monasteries across Sikkim. 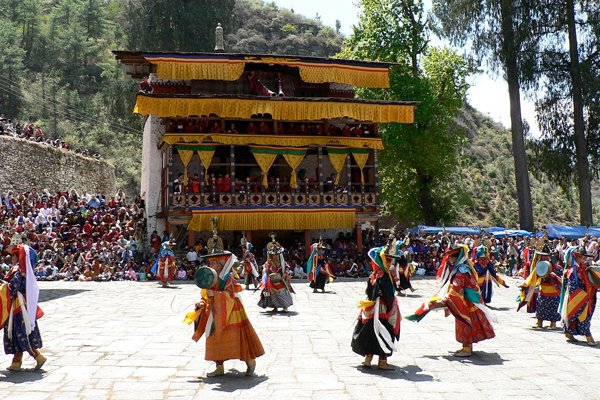 Trungkar Tsechu marks the birth anniversary of Guru Padmasambhava who was the founder of Tibetan Buddhism. Guru Rinpoche was the one who introduced Buddhism in Sikkim and in the neighboring area during the 8th century AD. This festival is celebrated with huge enthusiasm. Special prayer and rituals are held in monasteries and huge processions are being carried out on the street which is led by the Buddhist monks and lamas.

Time: 10th day of the 5th month of Tibetan calendar.

Pelling is among the hotspot tourist destination in Sikkim. In the month of December, this picturesque hamlet of Sikkim is all set to welcome tourists from all over the world. Pelling Tourism festivals or also known as the Kanchenjunga Winter Tourism festival calling a number of travelers every year. If you are looking for a mixture of culture and adventure, this festival will complete your search. It will surely leave you with wonderful memories which you can cherish throughout your lives.

Time: Celebrated in the month of December for 5 days (date is decided by state tourism board).

This festival is counted among the most popular cultural festival of Sikkim. Pang Lhabsol attract numbers of tourist every year from worldwide. This vibrant festival brings all the people of the state to a platform where they can immerse themselves and their souls in the celebration of festivals. Cultural festivals, the dance of lama warrior, and many more activities were held at a different location. If you are a cultural enthusiast and planning a trip to Sikkim, plan accordingly and so that you can attend this festival of the breathtakingly beautiful state.

Time: 15th day of the 7th month of Tibetan Calendar

Highlight: Dance performance by the monk. 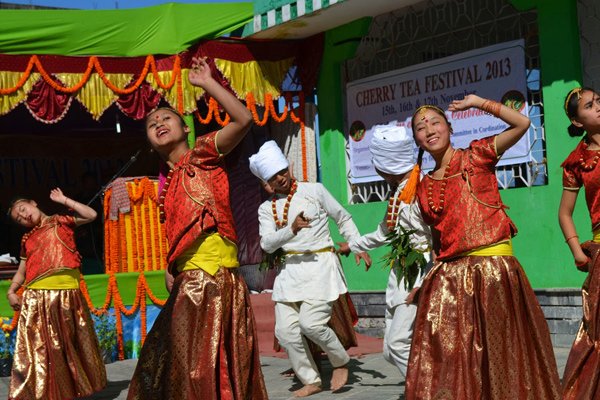 Cherry Tea festival is one of its kind carnivals. The wholly aim of this festival is to promote the natural beauty of cherry blossom and organic tea produced ‘Temi Tea Estate’ which is located at a distance of 51 km. from Gangtok. This festival attracts thousands of nature lovers who came here to immerse themselves in the beauty of this place which got covered in Cheery blossoms. Adventurous activities, photography, and cultural programs are an integral part of these annual events. 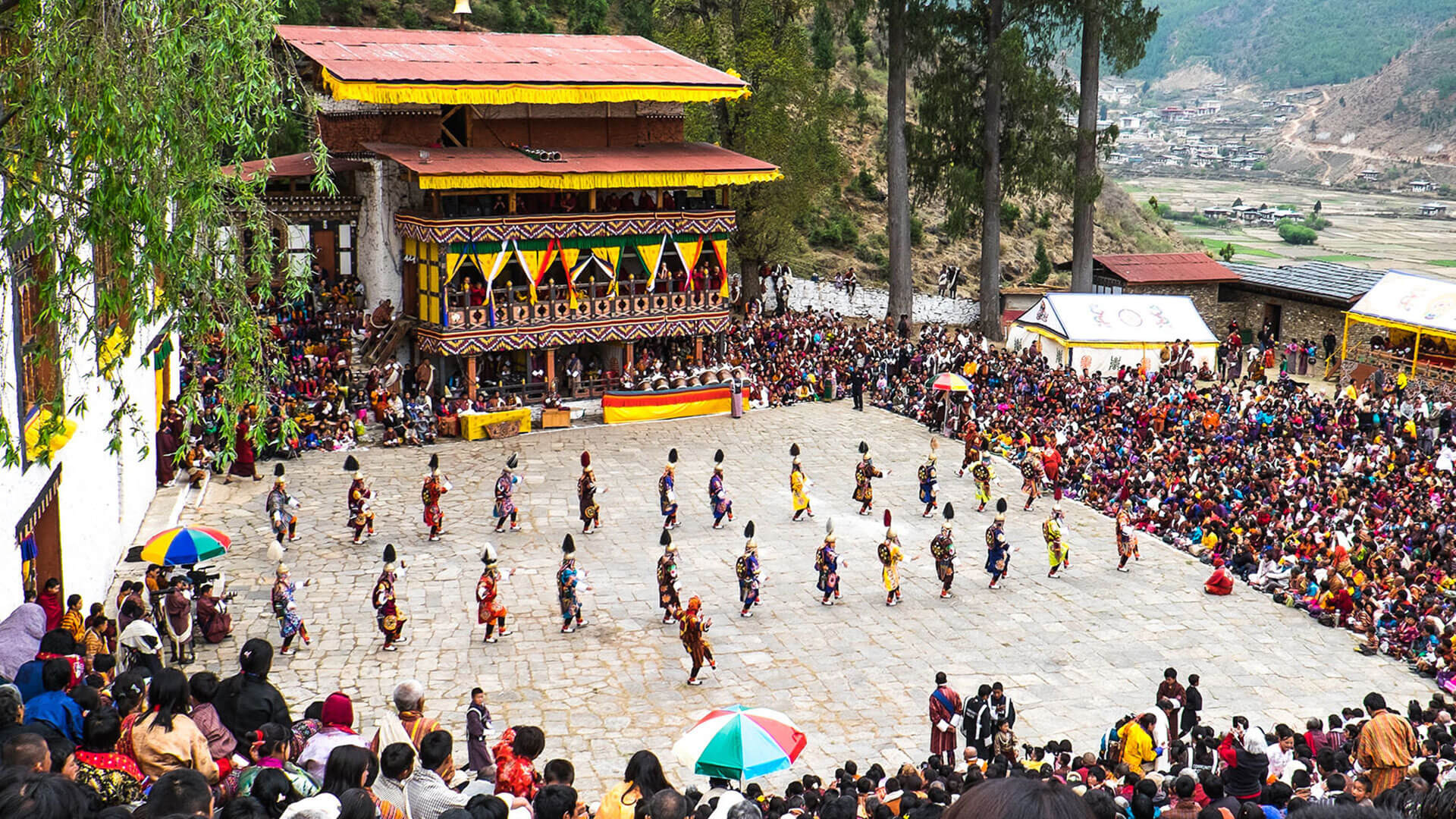 Being the land of Buddhism, a number of Buddhist festivals are celebrated across Sikkim. Lhabab Duchen is a festival that is celebrated to pay homage to Lord Buddha. This festival marks the auspicious event when Lord Buddha has ascended back on the earth after preaching his ideologies in the Heaven of thirty-three gods. For many devotees and travellers who have an interest in Buddhism and Buddhist mythology, this festival will help them to gain profound insight into the unique practices of Buddhism.

Time: 22nd day of the 9th month of Tibetan calendar 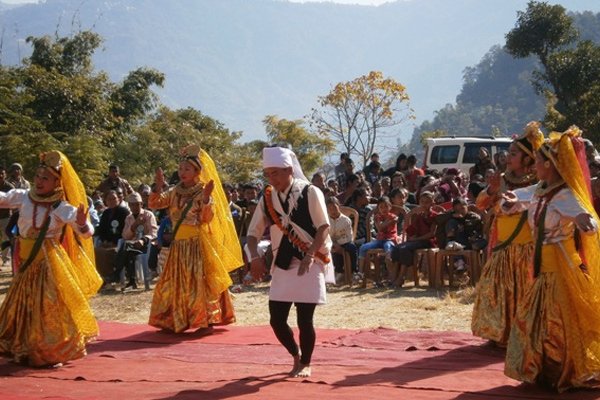 Barahimizong is a festival celebrated among Mangar community in Sikkim. It is one of the most prominent festivals for the Mangar Tribe. On this auspicious day, Mangar community came together and pay homage to their forefather and Kul devatas by performing various religious ceremonies and rituals. This festival is followed by various cultural programs and traditional Mangar food is also an integral part of this celebration.

Highlight: Prayer invoking by the Manager priest on this day.