Top Festivals in South India - Most Colorful Time of the Year

South India is rich in culture and heritage. By South India we do not just mean Tamil Nadu and Kerala. The entire southern region of India is called south India. It comprises of Andhra Pradesh, Kerala, Tamil Nadu, Karnataka, Telangana, Lakshadweep and Puducherry. All these states have unique flavours typical to their festivals. They have different traditions and trends to celebrate the functions. There are legends associated with most of the festivals, related to gods and goddesses. The festivals are mostly colorful and an affair to get together friends and family. Everyone gets together, have fun and eat special food. You can get a glimpse of the rich heritage of each place through these celebrations.

A few of the festivals celebrated in South India with full joy and energy are:

it is celebrated to mark the beginning of the Malayalam New Year. This festival comes in the month of August or September according to the English calendar. This is the national festival of Kerala since 1961. The whole celebration is a ten day affair, first and the last days are the most significant. Flower decorations are done on the gates or passages by everyone. The snake boat race also called Vallam kali is held during this celebration. Processions with decorated elephants are an essential part of the routine and there are artists in masks and attire that makes them unrecognisable. 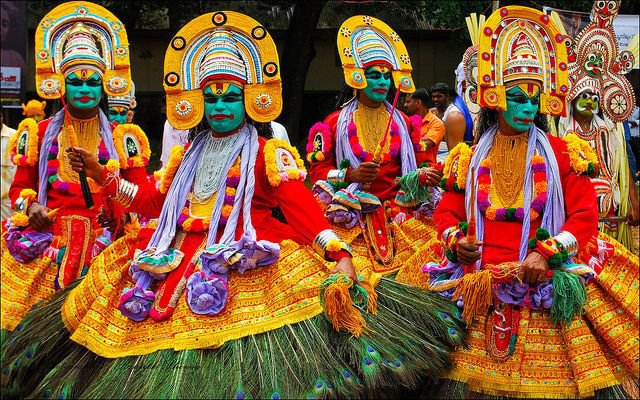 Onam sadya is a festive special Thali. It has items cooked specially for this day. Shared with friends and family there is an extra special deliciousness to the dish.

it is special to the state of Karnataka, celebrated in September or October. This festival is celebrated to cheer the victory of good over evil. The ten day Celebration ends with Vijay Dashami on this day it is believed that goddess Chamundeshwari had become victorious by killing the demon Mahishasura. Elephants are decorated and carry idols of the goddess. There is special procession from Mysore Palace to the Bannimantop called Panjina Kavayithu. It is done by holding torch lights. The whole Mysuru palace is decorated using 100000 bulbs to illuminate the building.

Celebrated on 14th January each year in Tamil Nadu. It is basically a thanksgiving to Mother Nature. In this ceremony begins with offering prayers to Lord Indra. Bhogi Mantalu, bonfire of useless things is made to mark the beginning of new things. The second day is observed in the respect of Lord Surya. A special dish made from rice and milk is offered and patterns using limestone powder are made on the entrance of the house. On the third day cows are decorated with garlands, bells and beads and worshipped.

Celebrated in the month of April in Karnataka. The celebration is in the honour of goddess Shakti at the Dharmarayaswamy temple in the city of Banglore. Darupadi was believed to have formed an army of Veerakumaras. The procession ends at the Dargah of Hazrat Tawkal mastan. The Karaga are the earthen pots with floral stand supporting idols of goddess held on the head during the procession. These are immersed in the pond at the end of the procession.

Celebrated in April in Kerala. Lord Shiva is the presiding deity in the processions. Elephants are well decorated with golden ornaments and flowers. Fireworks are also a part of this famous celebration.

Celebrated in the month of April in Tamil Nadu. This is a month long celebration in the month of April, held in the city of Madurai. In the first fifteen days coronation ceremony of goddess Meenakshi is celebrated. Wedding of Lord Shiva and goddess Meenakshi is also celebrated during this month. There are long colourful and musical processions held during this time. People from all over the world come to participate in this festival.

Celebrated in the month of March or April in Andhra Pradesh to mark a new beginning. Buds blossom in this season and is a fresh start for Mother Nature as well. This is the beginning of the lunar New Year too. The aroma of raw mangoes is a speciality of the festival as it is the key ingredient in many dishes. Ugadi Pachadi is a special dish made by the Telugu community in this festival. There are other dishes such as Bellam Garelu, Atukulu Payasam, Semiya Payasam, Pappu Pulusu etc. Ugadi Pachi has all the six flavours included ranging from bitter to sweet, symbolysing all the different phases of life. It is a celebration of life. In the beginning of the festival people take an oil bath and then wear new clothes. Entrances of homes and shops are decorated mango leaves and special colourful rangoli is made. Temples are visited by people to seek blessings from god for prosperity, wealth and success.

This festival occurs only once in twelve years of time. Next one coming up in 2028. It is celebrated to mark the entrance of Jupiter in the sun sign Leo. The celebration is done at the Mahamaham pond situated in the state of Tamil Nadu in the town of Kumbakonam. The festival begins by taking a dip in this holy pond.it is believed that holy rivers of Ganga and Yamuna meet here. A dip in this water is supposed to wash off all your sins. There are 12 holy wells in the vicinity named after the holy rivers of entire India. In Theerthavari, deity is bathed along with devotees; this activity is the special attraction among the locals. Large number of devotees throngs the place to participate in this dip and be able to get the blessings of gods and goddesses.

Held in the first week of November. It is celebrated in Karnataka, over three days. Local name of the festival is Vijay Utsav as it began in the vijaynagar reign era. It is a very colourful and vibrant festival. As a part of the celebration there are puppet shows and fireworks. An insight in the culture can be seen from the display in the processions. There is sound of drum beats and pipes all over the town. Janapada Kalavahini is a folk song concert held especially during this festival. Elephants well decorated marching through the streets as a part of the procession is a local favourite.

With so much zeal and enthusiasm in the environment, festivals are the best time visit any place to know the heritage and culture in true spirit. You can see colourful best attires adorned by the locals and also get to taste some of the most of the delicious dishes prepared for these festivals only. People are in the best mood and let you enjoy with them. The energy is infectious, so you are bound to have fun. It is the best time for family vacation as kids love to see so much activity around them.

Most Searches of South India