Top Places for a Temples Experience in South India

South India has woven quite a colourful culture. The people, clothes, artifacts, palaces, heritage sites etc are testimonials to this fact. One of the most striking features of this magnificent culture is the myriad temples which grace its lands.

These temples speak of long valued customs, traditions which have become USP of South India as a tourist destination. In fact there are some places which are famous for their temple trail tours. Here, we have brought to you a list of such nine such places which have come to be identified as the hallmark of temple trails in South India. Read on!

Ancient city of Madurai houses the most magnificent and famous temple of all i.e., the Meenakshi Temple. This temple has strikingly beautiful architectural features- the musical pillars (which produce musical notes when tapped) and hall of thousand pillars (which has 985 pillars arranged so, that if viewed from any angle they seem as if they are standing in a straight line), both qualifying as most impressive things of all. Not to miss is the Chithirai Festival which spans 12 whole days depicting the matrimonial union of temple’s principal God and Goddess. 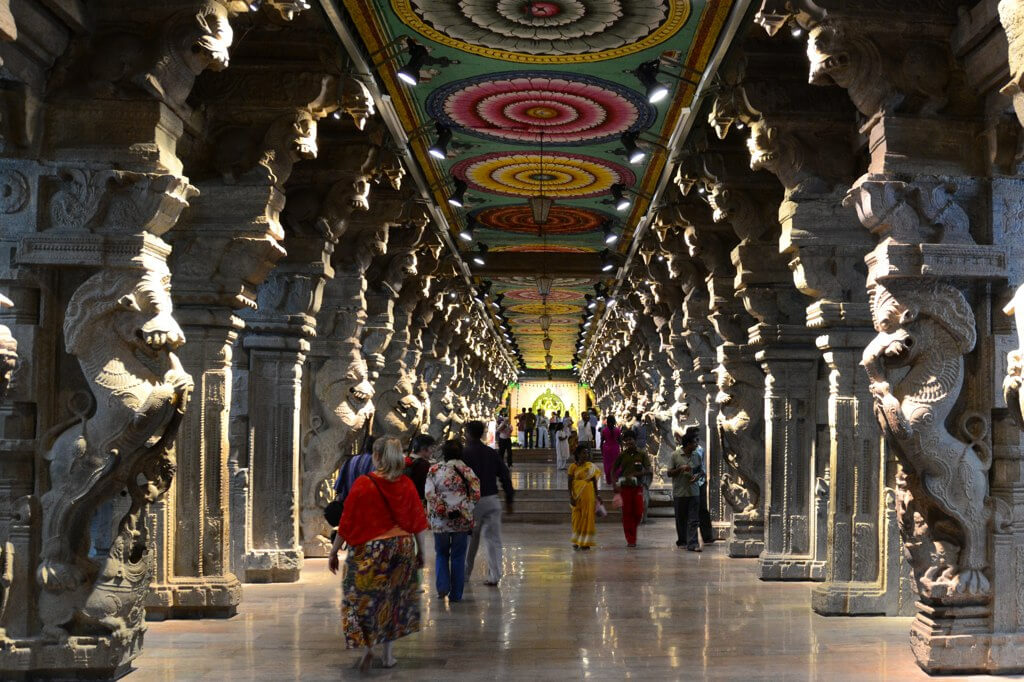 Also known as Tanjore, this city had special attention of the Chola kings as they built more than 70 temples during their reign. Among these temples, the one exhibiting unmatched grandeur is Brihadeeswarar Temple. It is one of the oldest temples dedicated to the worship of Lord Shiva and its importance is highlighted from the fact that UNESCO has listed it as one of the World Heritage Sites. Located in the state of Tamil Nadu, Kumbakonam boasts of 188 Hindu temples standing as the testimony of exemplary craftsmanship of ancient India. The kind of art work displayed in the temples especially in Sarangapani temple which is dedicated to the worship of Lord Vishnu (preserver in the Hindu trinity of Gods), is exquisite as it has a shrine built in the shape of a chariot which looks majestic. Also, two of the must see temples are Airateswara temple and the Great Living Chola temple. 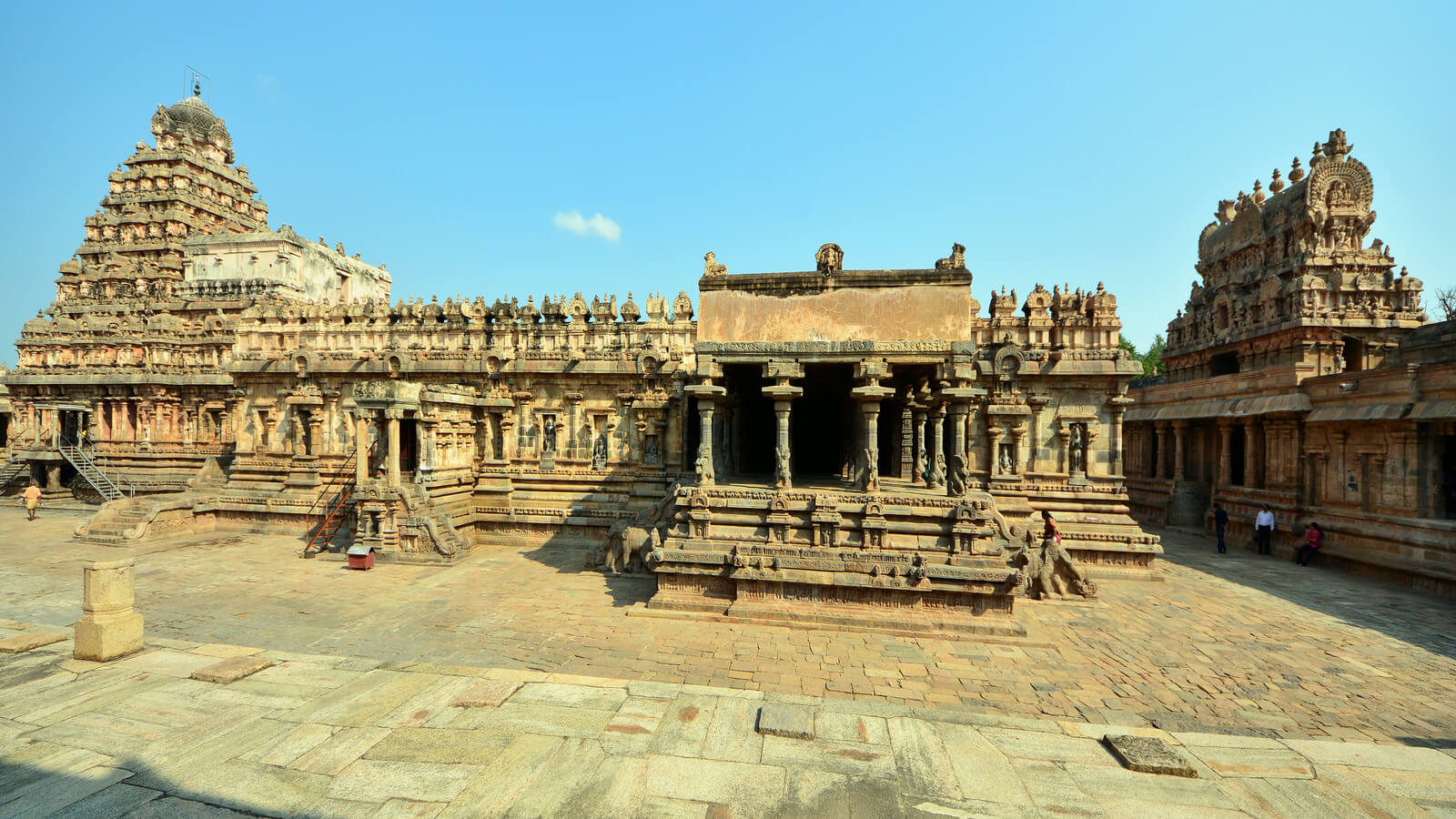 Kanchipuram stands as a place of great historical importance as it was the capital of Pallava dynasty and has seen reigns of many other dynasties. The imprints of all of these dynasties can be seen on temple architecture which is one of the principal attractions of this place. Famously called as the Land of thousands temples, only 100 or so temples are surviving the glorious legacy which are dedicated to the worship of both Lord Shiva and Lord Vishnu. 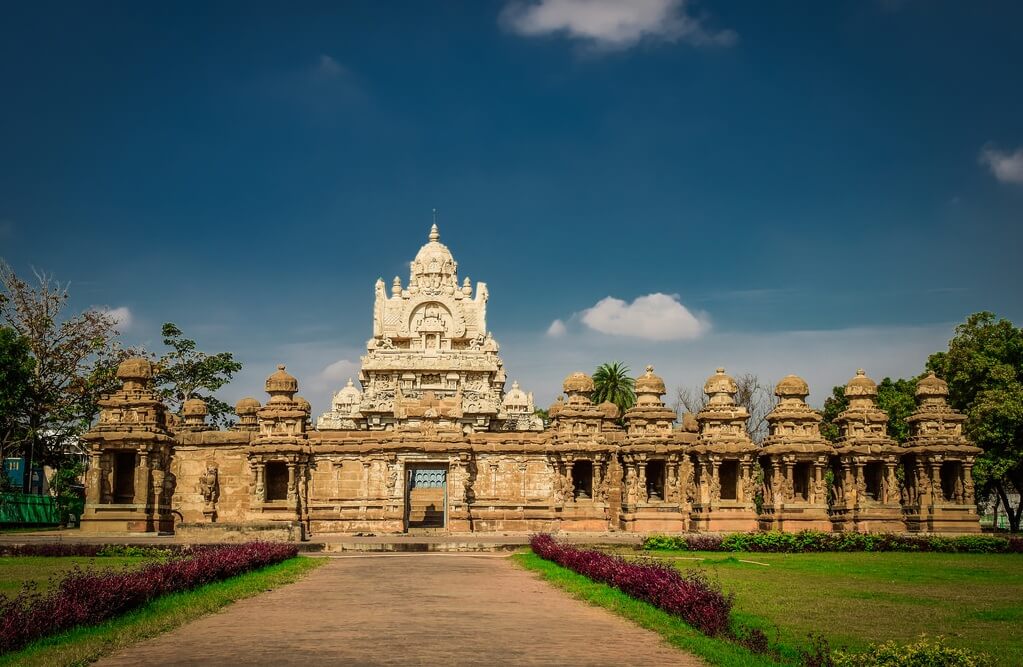 Another town where you can go on a temple tour is Rameshwaram. Here, Ramanathaswamy temple sees a lot of tourist traffic. The reason is long hallway that has beautifully carved pillars running along and also equally brilliantly painted ceiling. One thing to remember is that before entering the temple, a person has to take bath in the holy waters of Agni Teertham (located 100 mts. away from the temple) which is said to purify mind, body and soul. 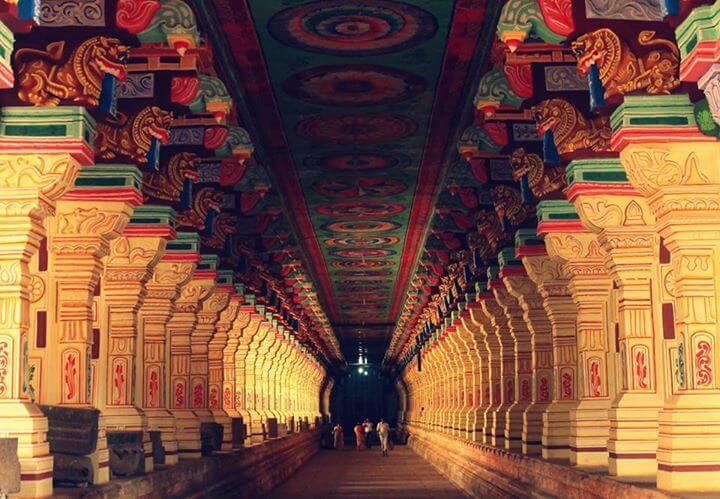 Also Read : Five Holy Places That Are Most Visited In India

The Nataraj temple in Chidambaram is one of the must see places on a temples trail tour in South India. Dedicated to the worship of Lord Shiva (performing Tandav Nritya/ cosmic dance), the temple is sure to leave you spell bound as it follows Vedic rituals given by sage Patanjali who has to his credit first ever extensive account of Yoga. You can get to witness the morning Yagna (fire sacrifice) which takes place at 8 a.m. and after seeing it you will also agree that it is no less than a spectacular sight. Also Read: 30 Famous Temples in India You Must Visit

Not just a place to see temples but to experience spirituality Tiruvannamalai will be the right choice. Temple to pay a visit here is Arunachaleshwara Temple. It is located at the foot of mount Arunachala and is dedicated to the worship of Lord Shiva. You will be amazed to know that at the time of full moon, Mt. Arunachala becomes a point where pilgrims flock to do holy parikrama or orbiting and there is a particular festival called the Karthikai Deepam Festival which sees lighting of a huge fire atop the mountain. As a plus, you can also locate some meditation caves on the mountain. 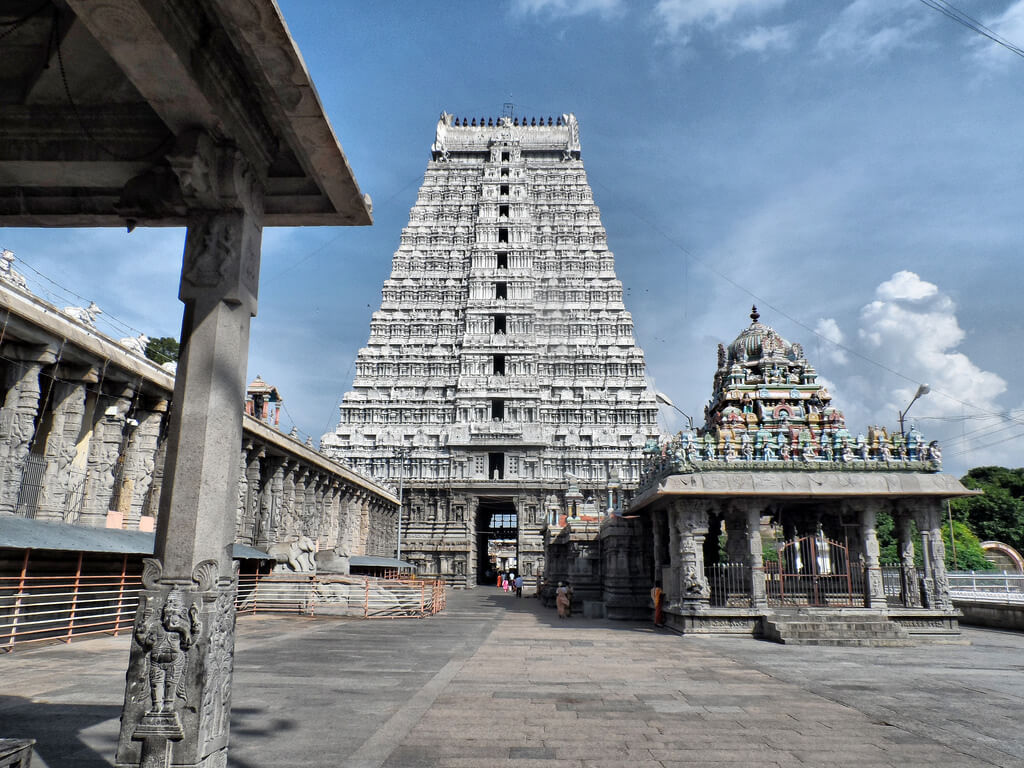 There are many temples which can be explored during a visit to Tiruchirappalli. Sri Ranganathaswamy temple (a sprawling temple devoted to the worship of Lord Vishnu), Rock Fort Temple (built by Naykas of Madurai on a rocky highland, 83 mts. above the city), Vinayaka Temple and Thayumanaswamy temple (situated atop and halfway of the rock cut steps) are the main attractions here. 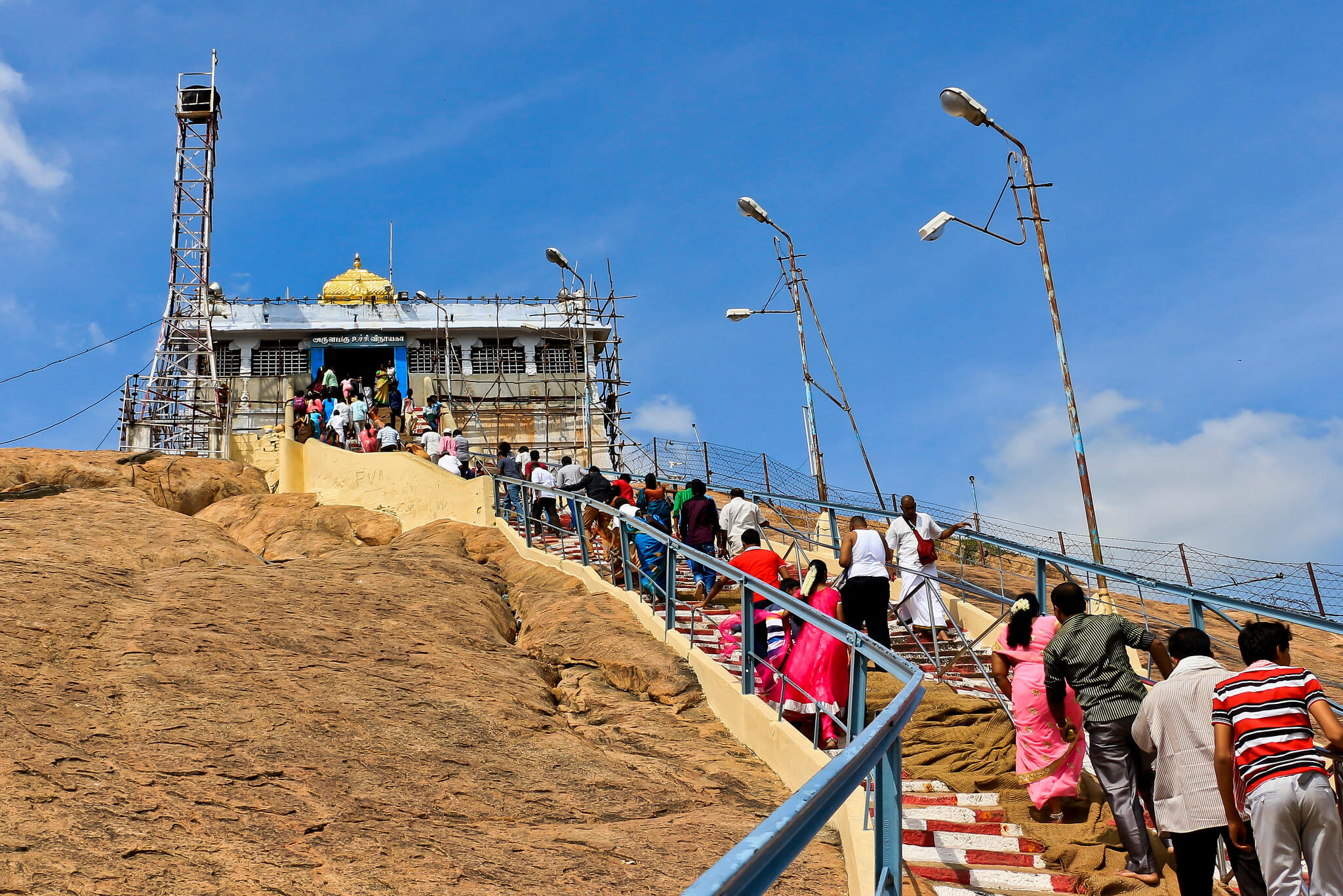 Last but definitely not the least, Tirupati is a very famous pilgrimage site which sees ever swelling tourist numbers every year. Lord Venkateshwara temple here which is pinned atop the hill can be reached by either walking 4,000 steps or taking a bus. Being one of the wealthiest temples of India, the dome is the most prominent feature as it is made out of gold. 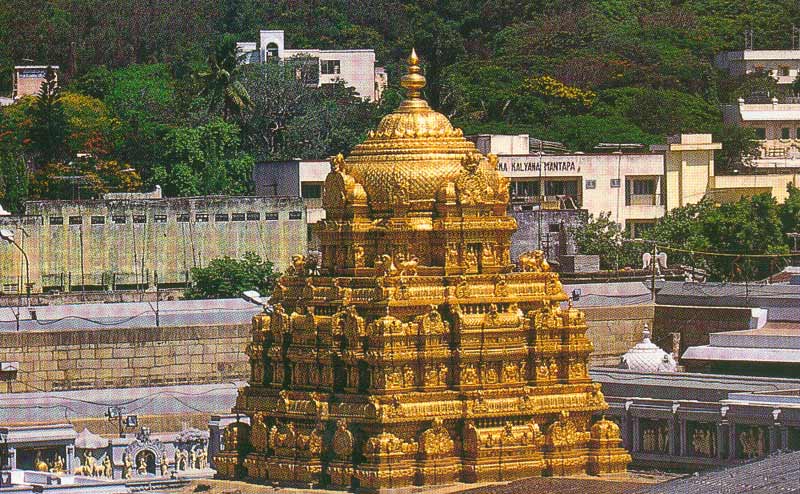