Diwali Festival in India: Visiting the Festival of Lights

As the common nation goes about our country, if there is any one place that knows how to party then that is India. It is not only the terrain and traditions that are jam-packed in India, but also a calendar rich in diverse celebrations of festivals. From great Indian weddings to humble village Melas (fairs) India has a lot to offer when it comes to a party! And the crowning jewel of all these festivals is Diwali!

Diwali like most other religious festivals can be summed up as a celebration of the triumph of good over evil which the country celebrates by illuminating every corner of their homes and work places along with their hearts with a row of lamps (which is the meaning of the word Diwali, when roughly translate.

Diwali is a country-wide shindig celebrated by not only Hindus as well as the Sikhs and Jains which are the major denominations of Hinduism. When it comes to the celebrations the festival entails various religious and regional variations. The Jains celebrate Diwali for attaining Moksha by Mahavira the 6th century B.C founder of Jainism. Moksha is the ultimate liberation from the cycle of existence which includes life and death and reincarnation. As for the Sikhs this festival marks the date of release of Guru Hargobind (their 6th guru) along with 52 others as it happened in 1619, when the Mughal Jehangir had kept them detained at the Gwalior Fort. 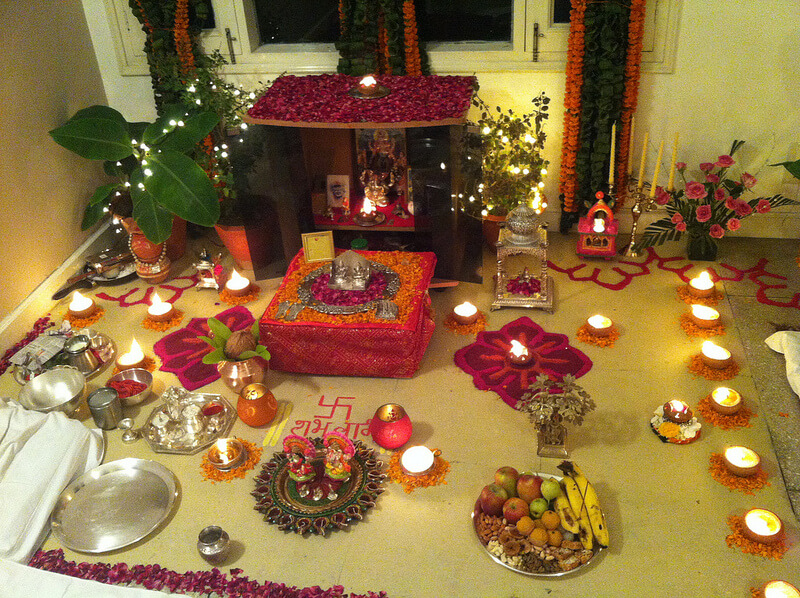 The Hindus, which forms the major religious group of the country, Diwali is the day that commemorates the victory of Lord Rama (king of Ayodhya) over Ravana (the king of Lanka) the demon, and his triumphant return to his kingdom after a period of 14 years of exile. As the story goes, in order to make a Lord Rama’s return as joyful and fast as possible, his proud followers had lit the path with several twinkling Diyas (lamps). And even today, Hindus light all paths on the night of Diwali with either traditional or electric lamps which is a key component of this festival.

But to take a deeper look at Diwali, spiritually for Indians it is the abolition of “inner darkness” i.e. ignorance with the light of knowledge and truth. So, a strong sense of spirituality with a deep meaning of pursuit of knowledge, truth and virtue along with diverse rituals that brings families closer and promotes peace and harmony remains at the heart of Diwali. The Majority of the Hindu population worships two prominent deities on this day, Goddess Lakshmi – the goddess of wealth and prosperity and Lord Ganesha (the elephant headed God) – the giver of wisdom, good fortune and auspicious beginnings. In Bengal, a group of Bengalis also worships Goddess Kali, the goddess of destruction who in the dark night of Diwali slayed several many demons and proudly exhibits their severed heads as a garland around her neck. This is another form of worshipping the triumph of good over evil.

However, the sole prayer for Diwali remains for prosperity, growth and well-being for the upcoming years. People dress in their new ethnic bests, exchange gifts and sweets, decorate their homes with colorful Rangolis (artworks made of powdered colour) and Diyas and at the end of the night make a very joyful racket by bursting crackers and lighting fireworks until dawn, as the devotional rituals draw to a close and is definitely accompanied by a hearty feast be it vegetarian or non-vegetarian.

As a parting thought, it is best to sum up Diwali a festival which holds a diverse sense of meaning for the diverse population of India, checkered with a variety of unique and also bizarre traditions, as a festival of internal illumination rather than that of food, shopping and hopeless prayer for prosperity. At the end of the day, the spiritual Indians boil their hopes and prayers down to attaining the power of illumination with wisdom, to have the courage to stand for good and banish evil, thereby maintaining their unquenchable thirst for truth.

Events & Festivals of India In November