Dating back to 5000 years, Indian culture is ancient and is respected among the oldest cultures of the world. Diversity adds to its glory. With many regions, attire, languages and food habits, the culture in India is rich to explore. For any kind of traveler, India suits the best as it renders superbly rich qualities to explore.

With 28 states and 7 union territories, every place has its language making it simply attractive in all respects. The national language is Hindi whereas there are 22 official languages with more than thousand dialects all across the Indian subcontinent. Be it any language, most of the languages belong to Aryan and Dravidian script.

In terms of religion, India primarily follows Hinduism. Buddhism is also one of the religions, which people follow in large numbers. There is about 13 percent of Indian population that is Muslim. This makes the Indian nation largest in terms of Muslim population across the globe. There are few of the Buddhists and Jains as well. 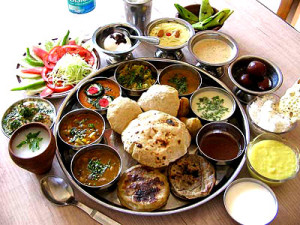 Considering Indian cuisines, we find that it boasts Turkish, Arab and European leanings. Well known for a large assortment of dishes, the extensive use of herbs and spices make them ever delightful. The style of cooking varies extensively and that is what makes it superbly rich. Wheat, Basmati rice and pulses constitute the major chunk of Indian diet.

The food becomes rich in curries and spices that include turmeric, cardamom, ginger, coriander, dried hot peppers, and cinnamon, among others. Although many Hindus are vegetarians, lamb and chicken are used extensively.

Architecturally India is rich in many senses. The great Taj Mahal is one of the most vociferous examples of incredible beauty. Blending fine elements such as Islamic, Ottoman Turkish and other forms, Indian architectural styles are richer than imagined.

In arts, India reigns supreme. Well known for its film industry throughout the world, India is superbly rich in many senses. Indian films are incredibly rich and attract widest audience around the globe.

With Indian dance dating back to 2000 years, various forms of dance include Odissi, Bharata Natyam, Kathak, Manipuri, Kuchipudi and Mohiniattam.