Uttrakhand also is known as devbhoomi means land of Gods because of temples and pilgrimage centers located here. It is a state across the Himalayas in Northern India. Uttrakhand is one of the most exquisite sites in India with spectacular snow-covered mountain ranges, valley coming through the peak of hills and greenery blooming on all-mountain and hills, everyone is bound to lose their heart in the beauty of Uttrakhand.

Uttrakhand is home to many wildlife and animals, there are few national parks like Jim Corbett Tiger National Park and Asan Wetland Conservation Reserve’, and Valley of Flowers and Nanda Devi Biosphere Reserve are there.

Uttrakhand has a very rich culture of Kumauni and Garhwali decent. The dialects spoken here are Garhwali and Kumauni. The state is so far a package of beautiful scenery, rich culture, and religious sites. 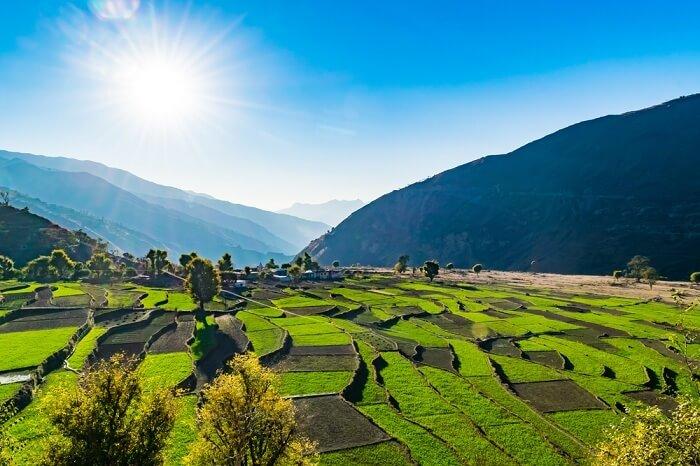 Read More - 10 Most Beautiful Places to Visit in Uttarakhand

Apart from that Uttrakhand also offers a number of adventurous sports to add in things to do in list like cruising through the energetic waves of the Ganges, trekking to some of the mesmerizing peaks, skiing through some of the picture-perfect slopes and fascinating destinations, enjoy the longest cable-car ride in India. This state also offers the almighty four-place pilgrimage called Chota char Dham to meet the end purpose of life.

Why Uttaranchal was Renamed Uttarakhand

Uttranchal was the name given by the Bhartiya Janata Party (BJP) in 1998 when separating the State Reorganization Committee was held. Although the name didn't suit most of the people living here and leaders of Uttrakhand.

So, it was renamed as Uttarakhand in Sanskrit means Northern land. This name by far is also mentioned in early Hindu scriptures and Puranas. This name made more sense than previous so it was easily adopted among people in 2006 after passing a resolution by the assembly.

What is the Capital of Uttarakhand

The capital of Uttarakhand is Dehradun mean while Nanital is judiciary capital of the Uttrakhand. Dehradun lies in the Garhwali region of the Uttarakhand. The city is famous for its weather which remains pleasant and cozy throughout the year. Dehradun is located in the foothills of Himalayas. This city is Paradise for all age groups, for solo travelers, for couples and even for families.

Dehradun has beautiful valleys, mountains, waterfalls, and caves to witness in its lap.

Where is Uttarakhand Location

The Uttarakhand is divided into two divisions, that is Kumaoni and Garhwali and there are 13 districts in Uttarakhand. Half Uttrakhand is surrounded by the Himalayas and the other half is the epitome of modern infrastructure development.

From the glaciers of Uttrakhand two most important rivers of Hindu civilization Gangotri and Yumanotri origins from there.

Why Uttarakhand Famous for

The heavenly place Uttrakhand is famous for its religious, spiritual and natural entity. Among the beautiful and almighty Himalayas, Uttrakhand has a limitless opportunity for tourism to explore the wonders of this place.

The beautiful confluence of five scared meeting point of rivers of India is PanchPrayag, it gives such a scenic view when Alaknanda meets Bhagirathi and become Ganga. Every bit of Uttrakhand is worth seeing and exploring for a beautiful and mesmerizing experience of a lifetime.

Uttrakhand has a very rich historical background. The presence of ancient rock painting and rock shelter it is highly believed that prehistoric humans lived there. The state was ruled by the Kauravas, Khasis, Kiratas, Nandas, Mauryas, Kushanas, Kunindas, Guptas, Karkotas, Palas, Gurjara-Pratiharas, Katyuris, Raikas, Chands, Parmars or Panwars, Mallas, Shahs and the British in turns.

One of the beliefs due to archeological remains also says that epic Mahabharata was written in Uttarakhand by Ved Vyasa. Early Scriptures show that Uttrakhand was home to many tribes in Garhwal and Kumaon region. After the attack of Gorkha in 1790-91, both regions were subjunctive ruled by Gorkhas.

After that, the British took over in 2815 and ruled both regions for a while. They made Nanital their summer Capital. This lead to the tremendous growth of the province in every term. They have made beautiful vintage bungalows, shops, roads, etc. After independence, Uttrakhand was the part of Himalayan state Uttar Pradesh but in 2000 it was pronounced as a separate state in the Republic of India.

Uttrakhand has more than enough reasons to be on the top list of holidays vacation. Uttrakhand comes with peace and soul awakening adventure for the whole humankind.

Here are 10 Reasons to Visit Uttrakhand

1. Dip in the charm of Nature

Uttrakhand is all about nature lovers. Here everything is covered in greenery and charm of nature will sweep anybody off their feet. Beautiful open fields, terrace farming, sunset and sunrise beyond the infinity, snow-covered mountain are all serene views to enjoy all over Uttrakhand.

Rishikesh land of hermits is famous for yoga and adventurous water sports. The mighty Ganges flowing through the middle of Rishikesh under Ram jhula and Laxmanjhula is a perfect place to do river rafting. It is a fun and thrilling experience of a lifetime.

3. Wash off all your sins in Haridwar

In Hindu veds Ganga is known for washing off everyone's sin from eternity. It was its purpose for which it was put on earth by Lord Shiva, folklore says that. So millions of people come in hope to leave their past behind and start fresh by dipping themselves in Ganga for once and all. In Haridwar, Ganga flows with that purpose.

Nanital is the judiciary capital of Uttarakhand. This beautiful hill station has been famous from the British era for its unforgettable sights. Riding through the ropeway among Nanital can be a magical experience for everyone.

Auli is a Himalayas ski resort. It is surrounded by Nanda Devi and Nar Parvat mountains. Auli offers a white winter wonderland to the people who come here with an adventurous heart. It offers ski resorts, ski slopes and other ski events organized every winter here. The best season to explore Auli is November to March during the snow.

Jim Corbett National park was established in 1936 as Hailey national park to protect endangered species of Bengal tiger. It was named after Jim Corbett and has been home of beautiful and majestic Bengal tiger ever since. This place is home to a variety of flora and fauna like Indian elephants, crested serpent eagles, red junglefowl, reptiles, amphibians, etc.

7. Visit Temples all over the State

8. Explore the Valley of Flowers

Valley of flowers located in Northern Chamoli is famous for rare and beautiful flowers of various flora. This site was mentioned by the UNESCO World Heritage site as a world network of Biosphere Reserves. Here tourists can see different beautiful flowers filling the air with their sent and decorating meadow with their colors.

9. Ride a Boat in Nani Lake

Nani lake also known as Nainital lake is in kidney-shaped Crescent in Nainital. It is a freshwater lake famous for boat riding and surrounded by seven hills. There are many stories behind this lake. It is said to be the saga of Shiv and Sati. This place is famous for its beautiful sunset and boat riding through that panoramic view.

10. Road Trip to the Mountains

There is something everyone should experience in Uttrakhand is a road trip with their friends and family. The road round the hills a little dangerous and most thrilling experience ever. Tourists rent bikes and scooters to talk to wind while traveling from one city to another.

The best time to visit Uttarakhand is from March to April and mid-September to mid-October in summer to enjoy the beautiful weather and adventurous activities like trekking and paragliding. In winters November through February are perfect for river rafting in Rishikesh and experiencing snowfall in Nanital and Mussourie.