20 Exciting Places to Visit in Kolkata

On the eastern banks of Hoogly River, Kolkata stands as a place of culture, tourism and entertainment. It is the third most populated city in the country. Kolkata is an important tourist destination in India. This article will talk in detail about 20 different places that you ought to visit in Kolkata.

This bridge is the sixth largest in the world. It is one of the famous landmarks in the city. A walk or drive on this bridge is a must do activity. You can also watch the bridge from the water (Hoogly River). The bridge is an important spot for a lot of movie shootings. People take pictures with the bridge in the backdrop. 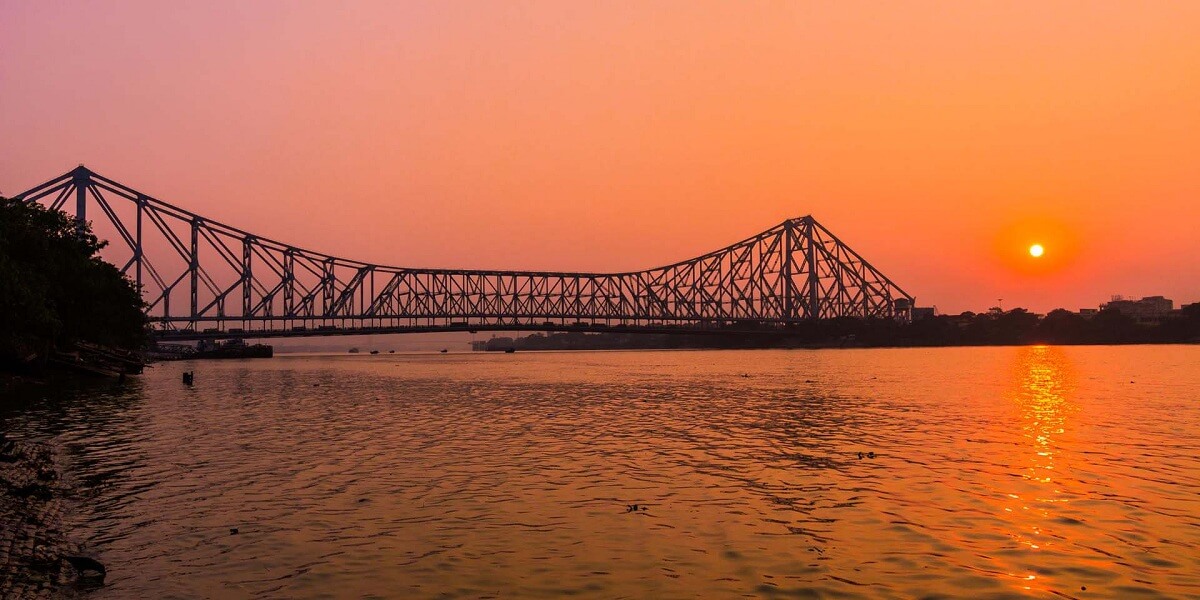 The name can be literally translated as House of Thakur. This destination is an 18th century mansion that was the ancestral residence of Rabindranath Tagore (freedom fighter and writer of National Anthem for many countries including India). Today, the mansion is converted into a university and a museum. The museum is dedicated to the life and works of Tagore. 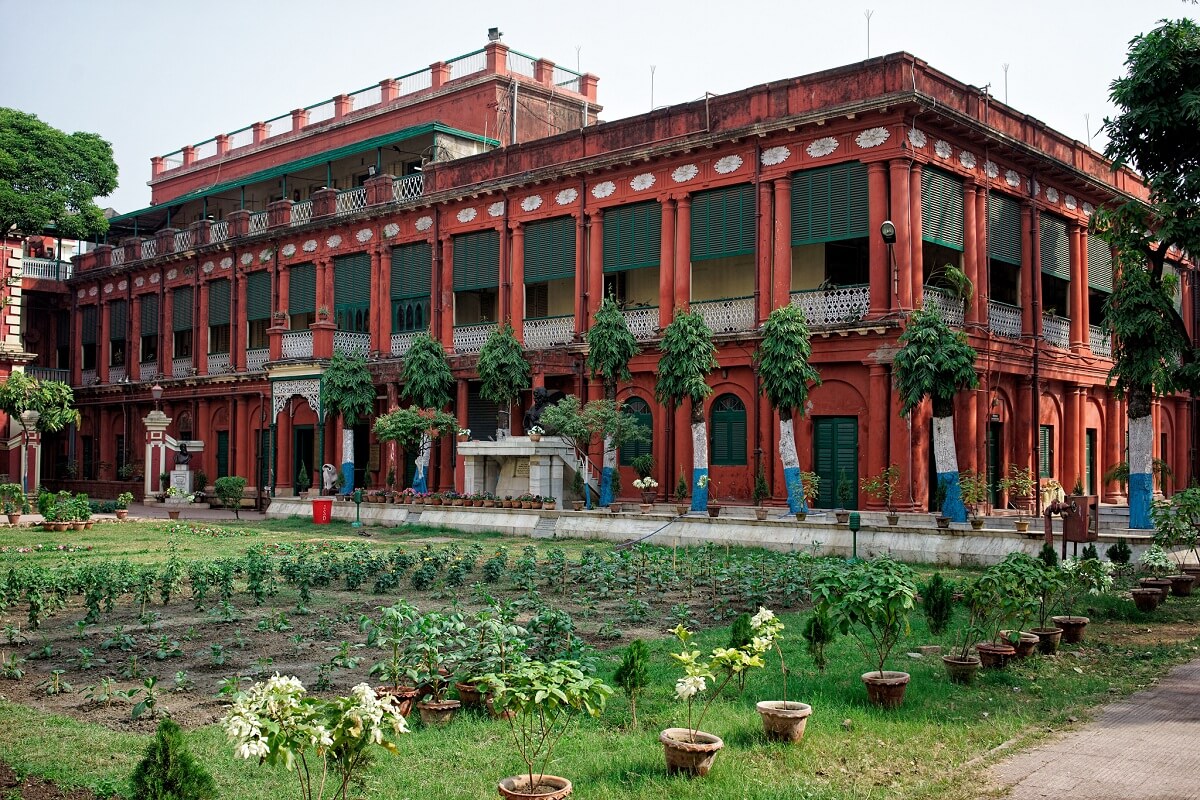 As the name indicates, this is just a street. The street is also named as Food Street; for a reason. This street never sleeps. You can always find vendors and restaurants open in this street. Pubs and nightlife thrive in this area. This street used to be a youth hotspot during 70s and 80s. Today, you can find a lot of tourists and local people in this street enjoying various types of cuisines. 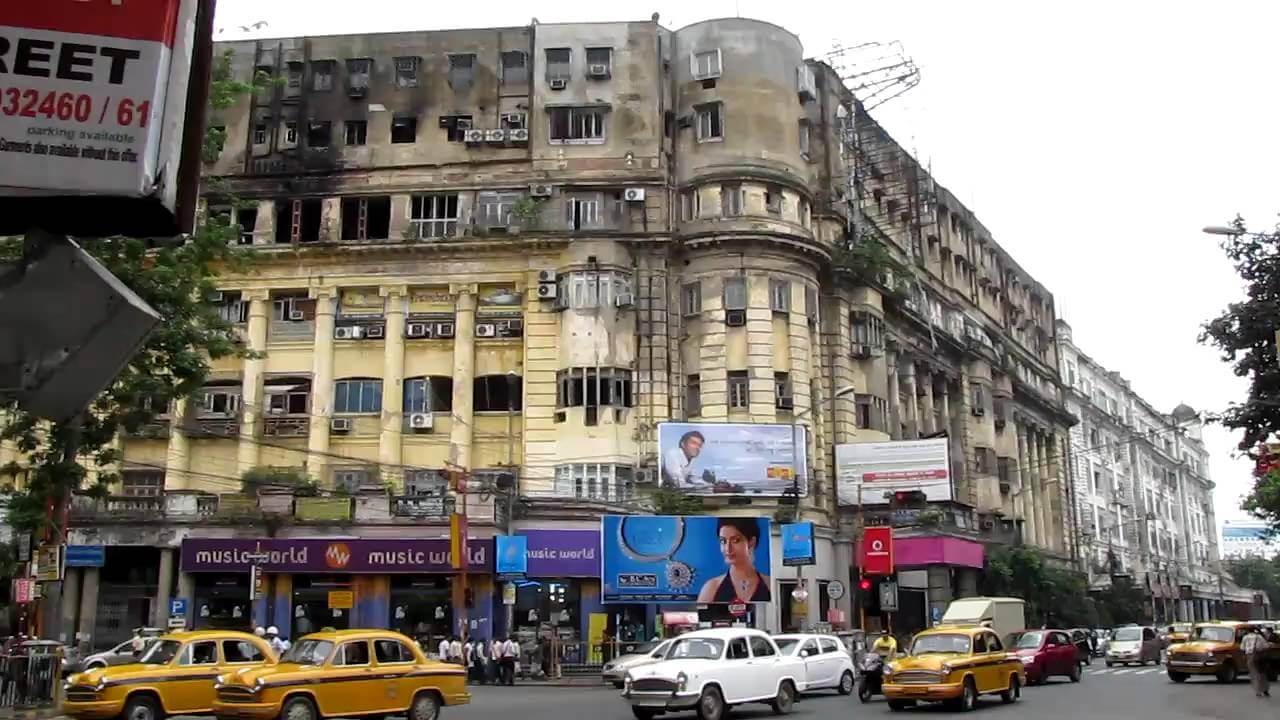 This museum is the oldest one in the country and also the largest one. It was established in the early 19th century. There are 35 galleries with numerous elements like mummies, painting, artefacts and others. If you are visiting with your children, this museum is a must visit place in Kolkata. 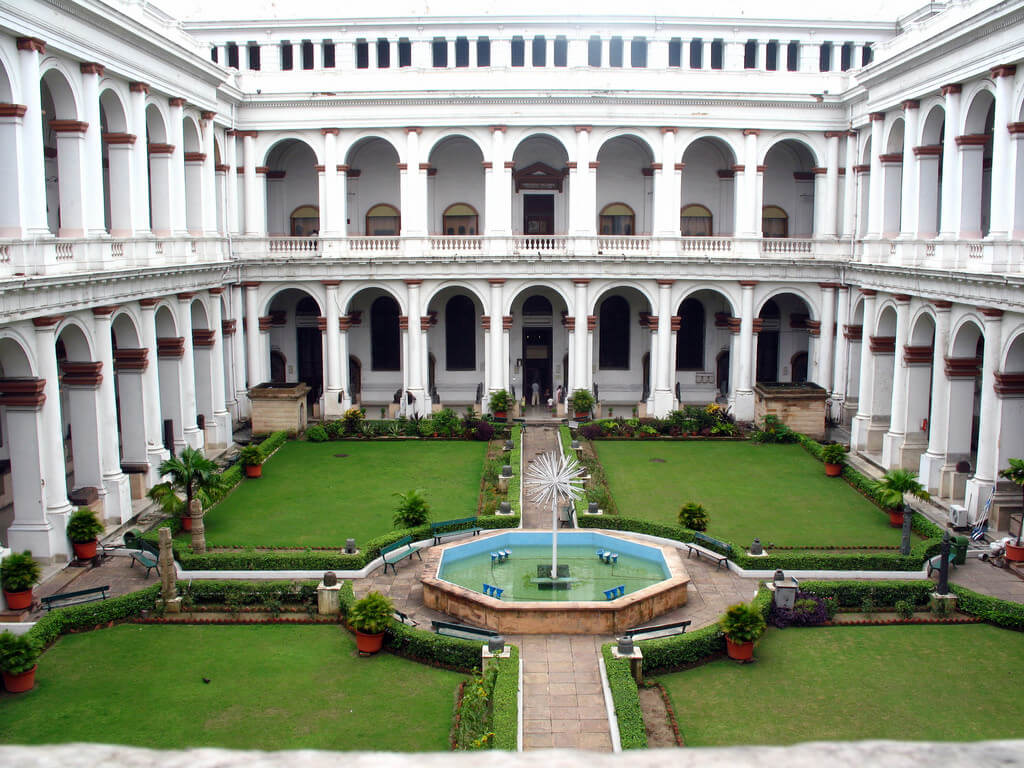 Also Read : 10 Most Interesting and Unique Museums to Visit in India

This memorial is located on the river banks of Hoogly. It was built in the early 20th century in memory of British Queen Victoria. It is a museum with includes a lot of different artefacts and antiques. The architectural style of this museum is also an interesting one. There are 25 galleries in total and is one of the important tourist spots in Kolkata. At night, the memorial is decorated with lights and is awe-inspiring to watch. 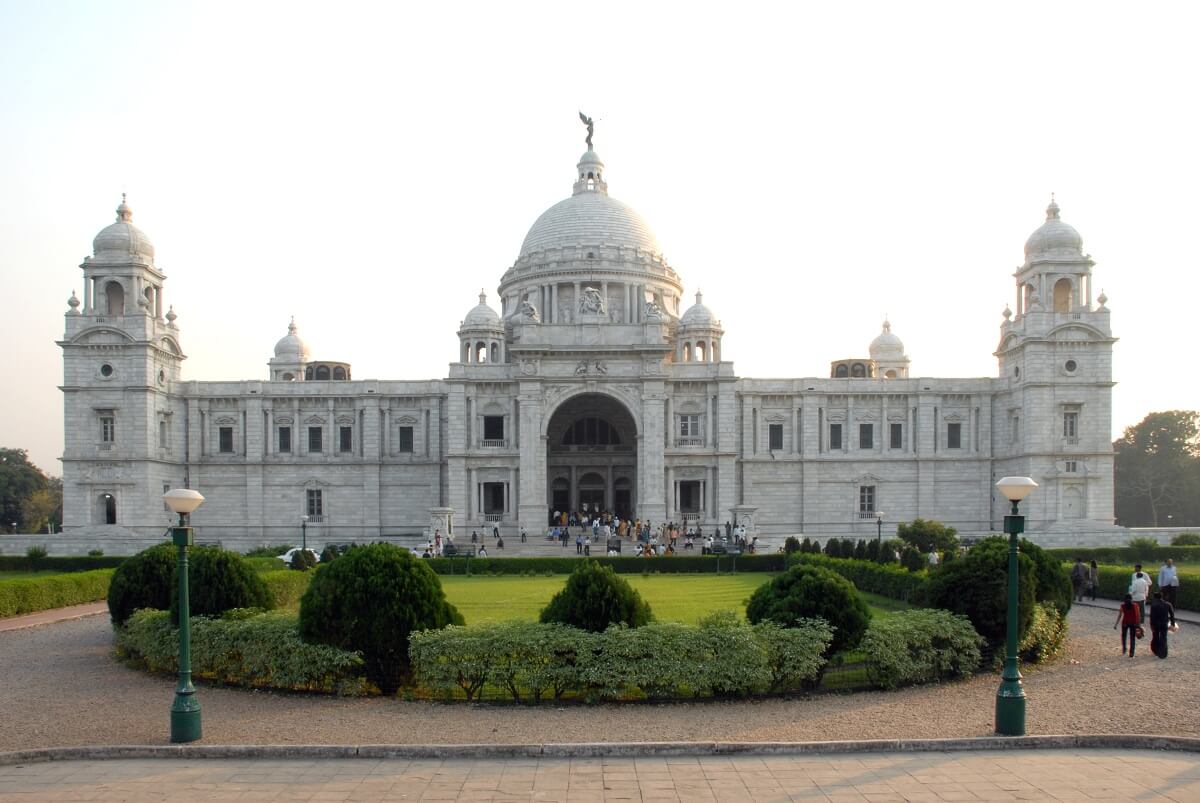 This Wildlife Sanctuary is located on the foothill of eastern side of Himalayas. It is very famous for its rare one horned rhino. This forest reserve is very huge and has numerous flora and fauna species. You can also find exotic animals like Indian bison, wild boar, elephants, Royal Bengal tiger and many others. 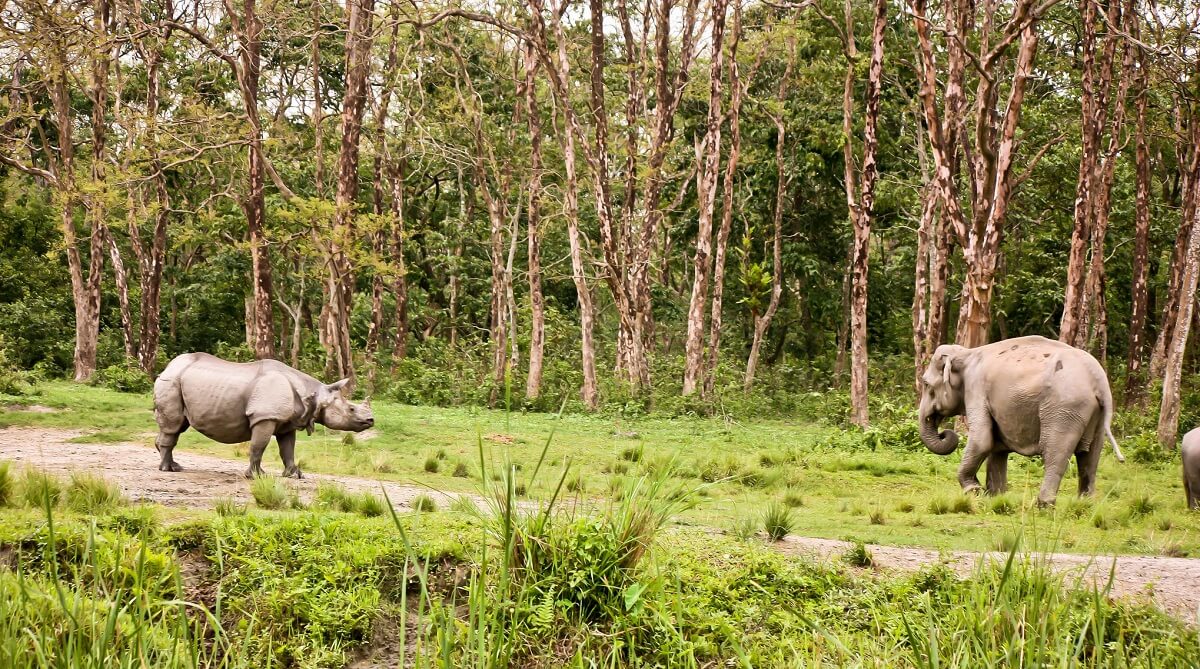 This temple took 26 years for construction and is an important landmark in this city. The temple is dedicated to Hindu god Krishna and his wife Radha. The temple is completely built in while marbles with interesting carvings and sculptures. The temple covers 130 acres of land. Even those who do not follow Hinduism visit this temple for its architectural beauty. 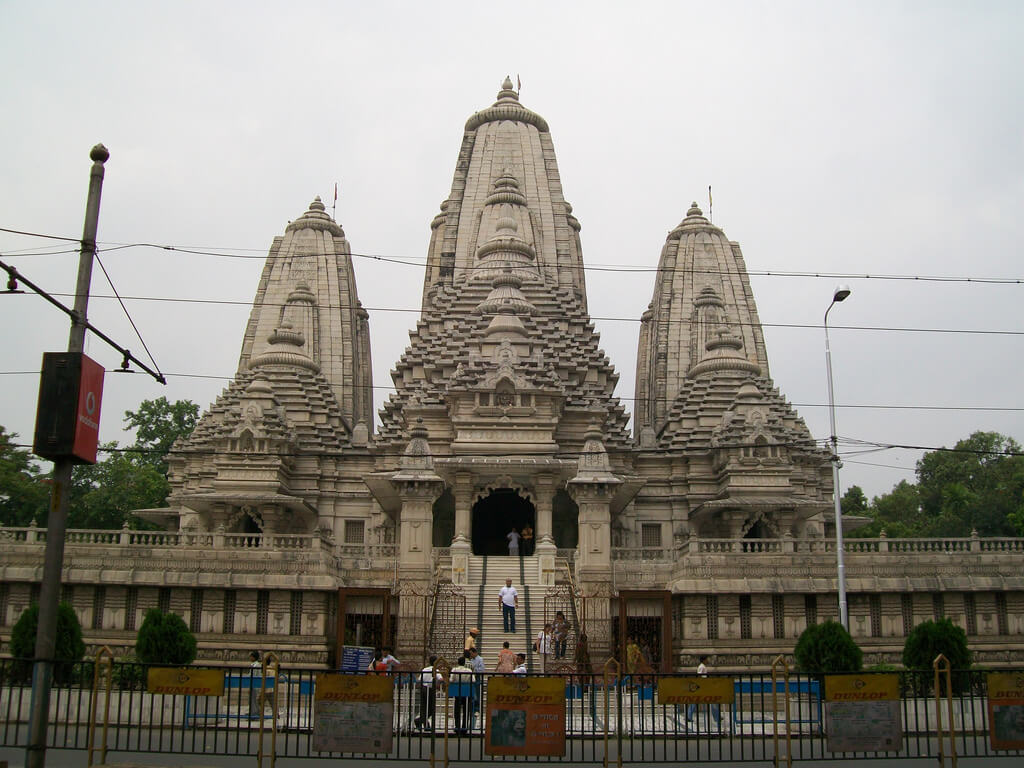 It is one of the oldest race courses in India and the first horse race in India was conducted here. If you like horse race, you can visit this race course between July and September or, between November and March. You can usually find horse races during Saturdays or any public holidays. 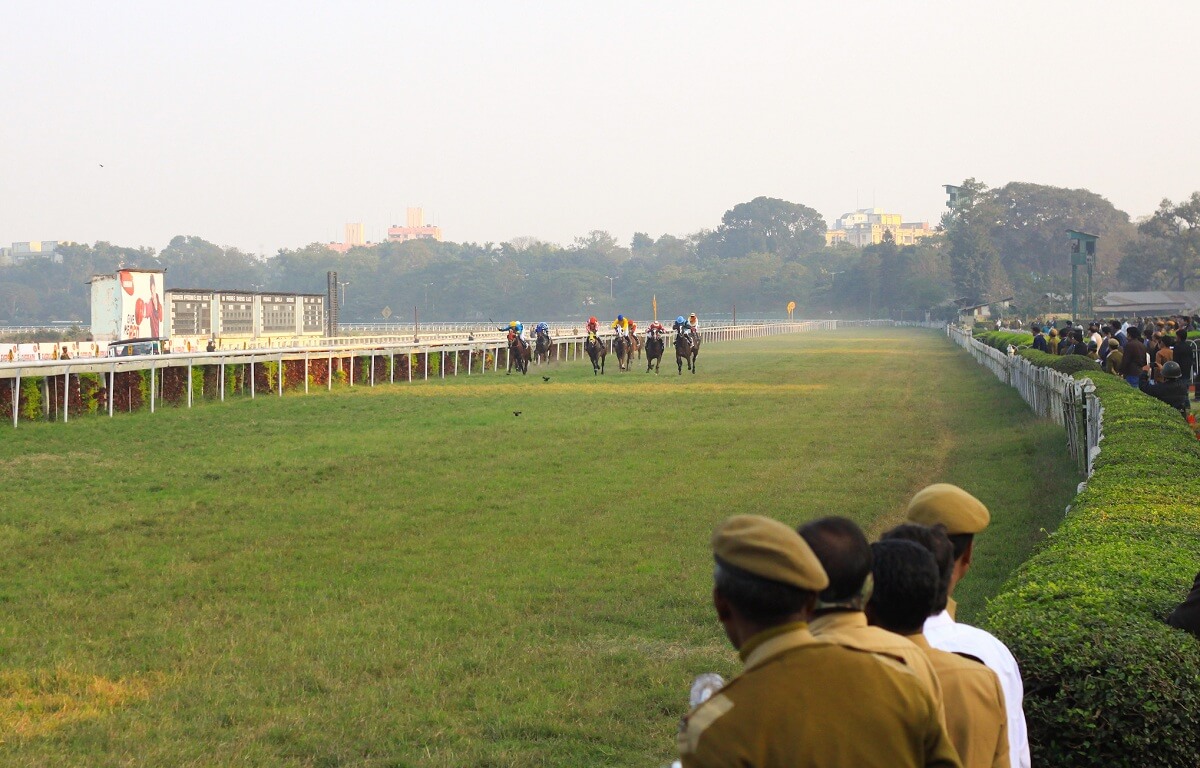 This is a very famous stadium for cricket. It is also called as Cricket Colosseum. It is the largest cricket ground in India and third largest in the world. It is an iconic place in Kolkata and if you are lucky you can catch a match during your vacation. 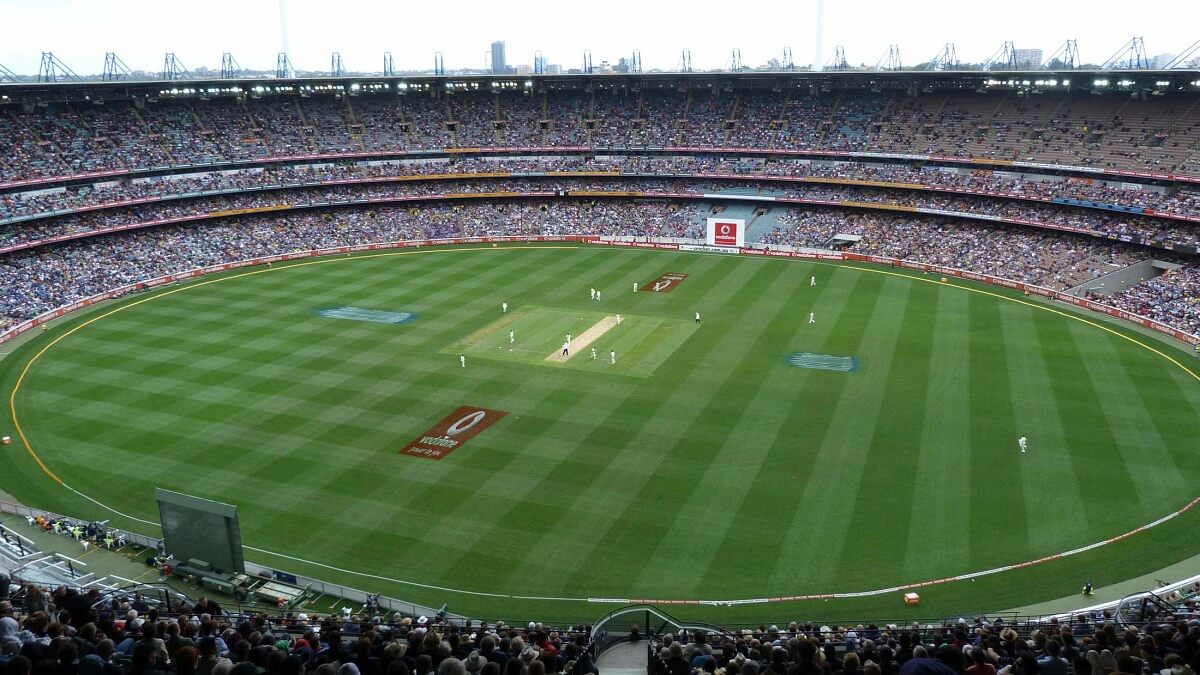 This is a mansion that is built in neoclassical style. This palace has a museum for furniture and paintings. There is a zoo called marble palace zoo near the museum and it is a must visit place. The mansion was built in 19th century and is considered as an architectural marvel. The museum contains arts from various parts of the world. 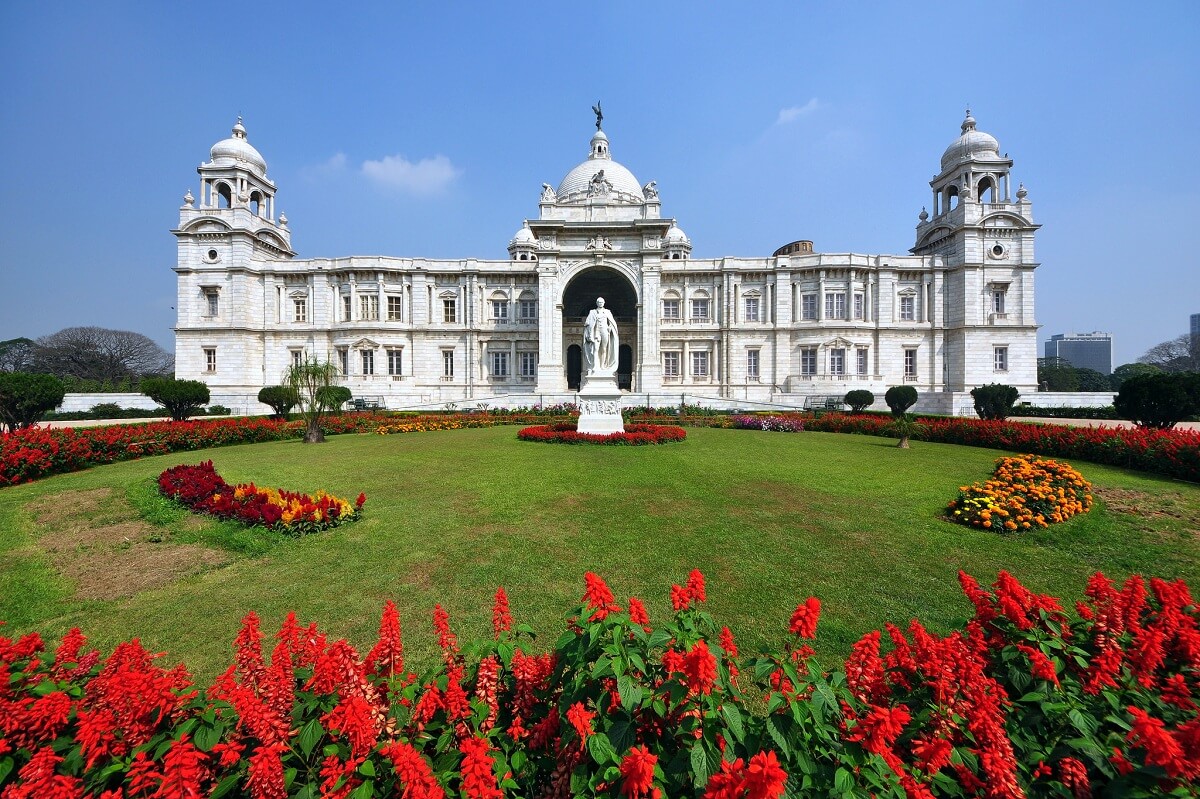 This temple is dedicated to the ferocious goddess of Hindus, Kali. The temple was built in 19th century. This temple is found on the banks of the river. The temple covers 25 acres of land. Those who do not follow Hinduism also visit this temple for the gardens that surrounds the main shrine in this temple. 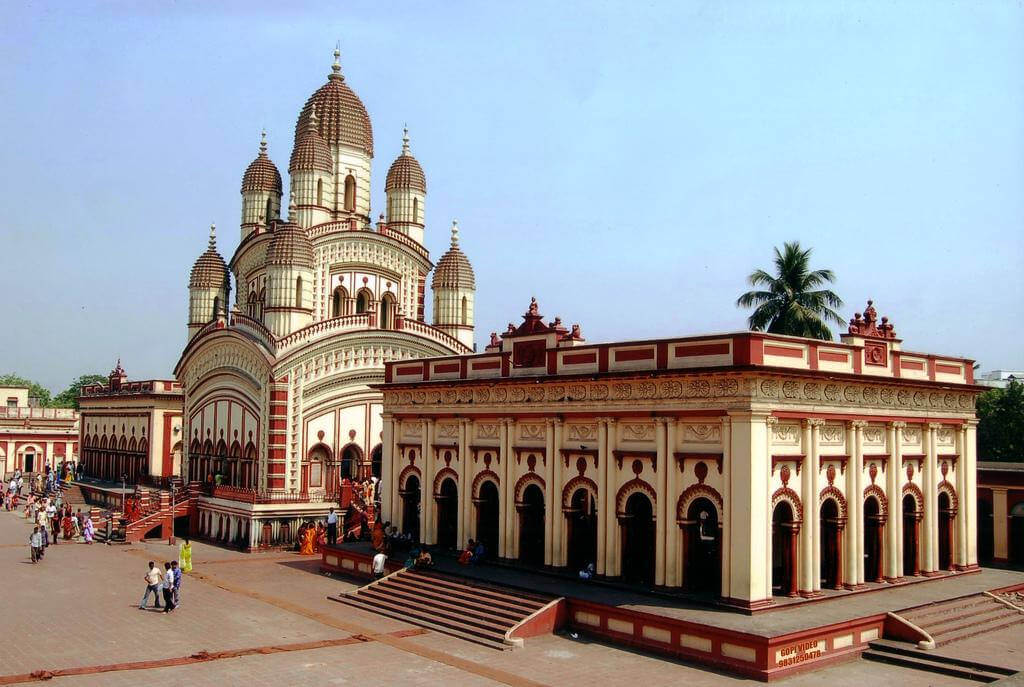 This fort was built in 18th century for the victory of Sir Robert Clive. The fort has a large garden surrounding it. This garden is called as the maidan. It is three kilometre long and it is the largest urban park in the city. Inside the fort, you would find boxing stadium, football ground, telegraph office, post office, firing range, swimming pool, church and a cinema theatre. 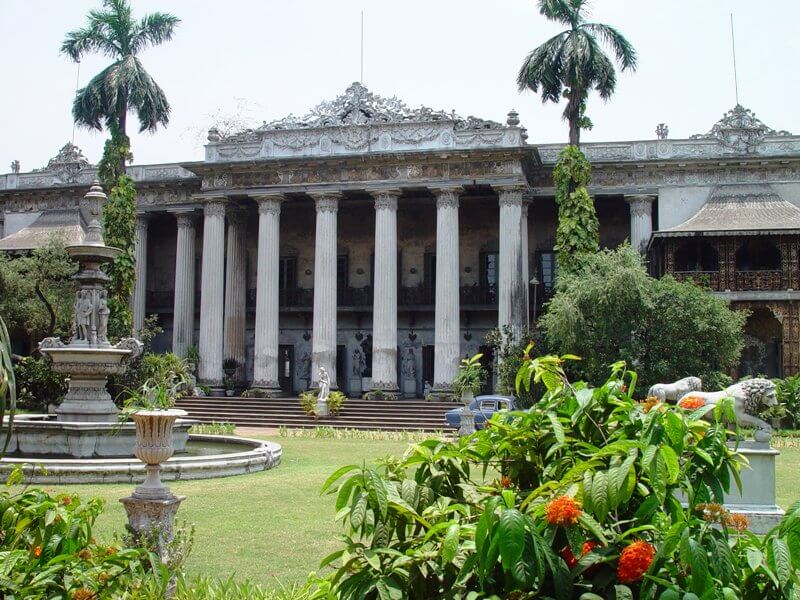 It is exactly what the name says. It is a cemetery for British soldiers. It was built in 18th century and there are many gravestones that date more than a century back. The cemetery has an ancient look and the surrounding is always silent which gives an eerie look. People visit this cemetery for a thrill. 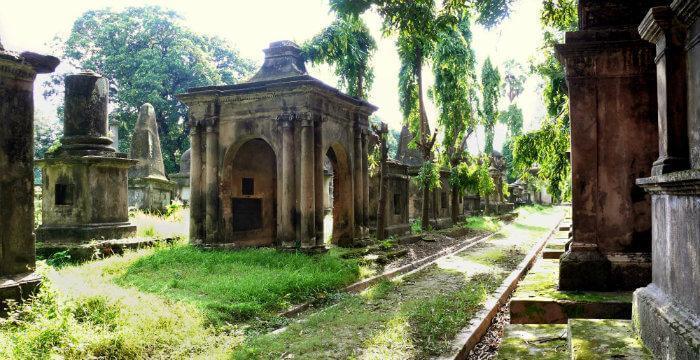 This cathedral was built in 19th century initially and then it was rebuilt in 20th century. The cathedral is built in IndoGothic architectural style. It is a massive cathedral and is an important tourist destination whether or not you follow Christianity. 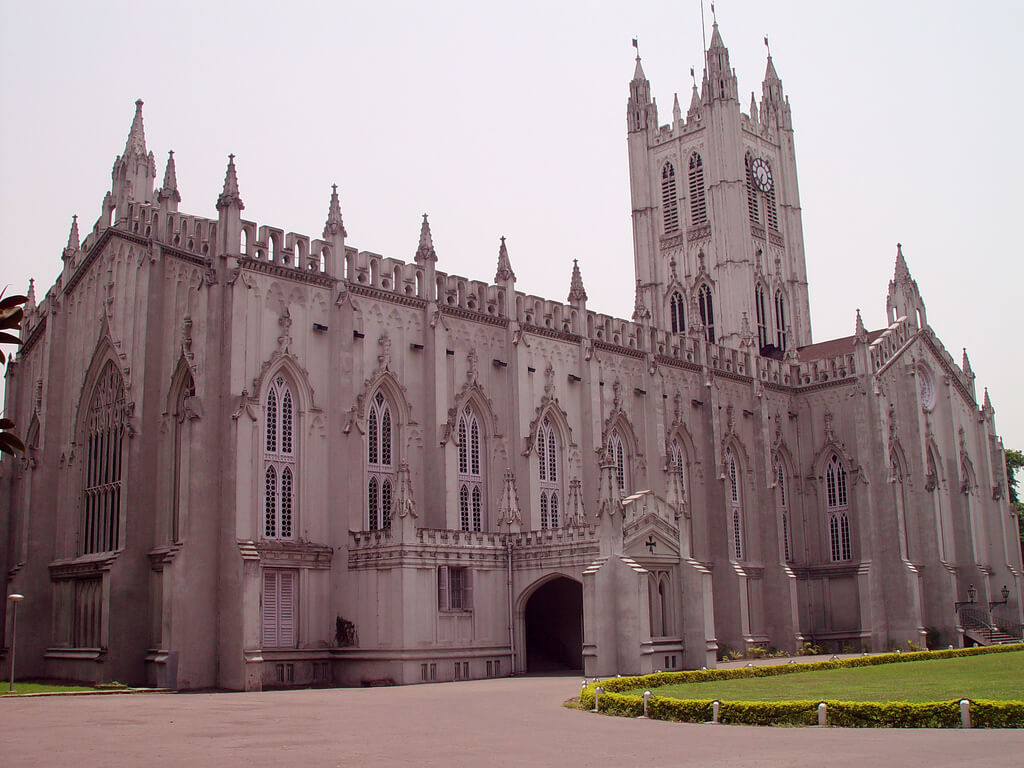 This is a theme park for kids and covers 40 acres of land. You have a lot of thrilling rides and various food stalls to enjoy here. You can find many water based and land based rides here. There is an artificial wave pool, kids’ pool and an artificial waterfall in this park. The shops in this park are best for buying souvenirs. The park opens by 10:30 in the morning and closes by 8:30 in the evening.

This park is also called as Prakriti Tirtha. It is an urban park that covers 480 acres of land with many recreational spaces that include wildflower meadows, restaurants, lakes, grassland, urban museum, craft shops, gardens, amphitheatre, mist house, tea plantation, water garden; children play area and many others. It starts at 10 in the morning and ends by 10 in the evening during weekends and starts by 2 in the afternoon and ends by 8 in the evening on weekdays. You can click a lot of interesting and awe striking pictures here.

This is a science theme park that is the largest in the subcontinent. It includes several galleries, halls, maritime centre, Evolution Park, exploration hall, space hall and water aquarium with 26 species of fishes. The theatre in this park has 150 projectors to give a wonderful 3D view. There is a motion stimulator time machine, robotic pre historic animals, early plant models, dinosaurs, and many others. Apart from these, there are rides, musical fountains, gravity coaster, road train, monorail cycle and many others that would keep you and your kids very busy.

This mosque is the largest in the city. It is built in Indo Saracenic architecture with astonishing interior designs. The entrance is made of red sandstone similar to tomb of Akbar. There are three green coloured domes with minars and minarets. There is a courtyard with a well. The marble on the floor and glass chandeliers give a solemn look to the place. The mosque is very big and it can accommodate 10,000 people at the same time in the prayer halls. The mosque closes for the day by 8 in the evening.

Though it sounds boring, this place has been attracting art lovers from various parts of the world. There are eight galleries and a museum for ancient artists. You can find old and rare textiles, carpet gallery, miniature paintings and others. There is an art library, contemporary of graphics and numerous other elements. The academy closes by 5 in the evening. This academy has the largest gallery in the country.

This garden has 1200 species of plants spread across 109 hectares of land. This is an 18th century botanical garden. The best part of this garden is the large banyan tree that forms the largest canopy in the world. There are half million dried plant specimens from various parts of the world. You can find very rare trees here and there is an orchid house that includes rare and common orchid types. Starting from mango tree to mahogany tree, you can find a lot of tree species here. There is a library in the park and a serpentine lake which offers boating experience too. This is a place for nature lover, kids and photo enthusiasts.

This is not an exclusive list. There are a lot of other places to enjoy during Kolkata Tour like Dalhousie Square, Central Park, Education Park, and Millennium Park, Saheed minar, prince ghat, Chowringhee, writer’s building and many others. The best time to visit Kolkata is during any festival so that you can enjoy the culture of the place too. The place retains its beauty throughout the year.