Losar is one of the major festivals celebrated by the Tibetan Buddhists. It is celebrated as Tibetan New Year. The term Losar, means “New Year” in Tibetan language, Lo-New and Sar-Year.

Losar is celebrated for more than 15 days in Tibet. It is also celebrated in India, where the inhabitants follow Buddhism. But in India, the celebration has been restricted for 3 days.

Losar Festival signifies the beginning of a new year. On the very first day of 11th lunar month, Losar is celebrated by the people of Ladakh. The tradition of celebrating Losar was started by the King, Jamyang Namgyal in 17th century. During his ruling period, he made up his mind to lead a mission against the Balti forces. Although he was advised by his well wishers not to do any such activity during the time of New Year, King Jamyang Namgyal to satisfy the crowd declared that New Year in Ladakh will be celebrated before the real date (two months earlier). Thus, he managed his crowd and also proceeded with his intentions. 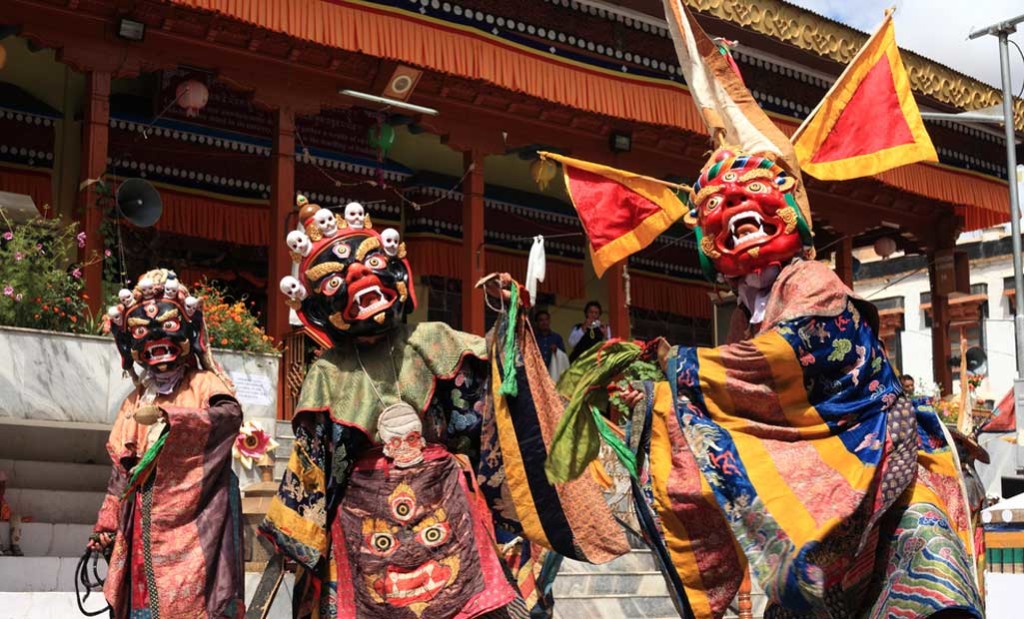 Since then, Ladakh starts preparing for the New Year on the 29th day of 10th lunar month and thus celebrates New Year in the eleventh lunar month.

People store their requirements for the feast like grains, sheep, goats so that they can enjoy with friends and relatives in the evening. They illuminate their houses with lights, which looks attractive. The ornamented shrines look beautiful in the evening. People fix images of ibex on the walls of their kitchen and on the doors which is considered as auspicious. Idols of ibex, which is a symbol of fertility, made of dough are kept on the shelves of kitchen area for the inflow of good luck.

People offer prayers to God and greet their elders in the family as well as their relatives on this day. The younger members go out to meet and greet their relatives in the locality whereas, the elder members stay back home to welcome their younger relatives. They carry a khatak scarf as a gift. On the eve of Losar, people following Islam and the Christianity also visit their Buddhist acquaintances and friends.

‘Metho,’ is the procession of fire that comes out in the evening. The villagers march through the lanes and market places bearing torches of flame that brightens every nook and corner along with chanting slogans. The slogans are chanted to drive away evil spirits, hungry ghosts and bad deeds. People bid farewell to the passing year by throwing the torches out of the town and welcoming the New Year. Thus, they conclude the procession of fire.

Highlights of the Losar Festivals

Every year, the dates and location to celebrate this festival change.