Mehrangarh Fort, Jodhpur - An Epitome of Splendour and Majesty

Mehrangarh Fort in Jodhpur, one of the most impressive works of the ancient times, speaks volumes about the rich heritage and glorious past of India. It is one of the most splendid forts of India and the most visited place in Jodhpur with tourists rushing from all over the world. 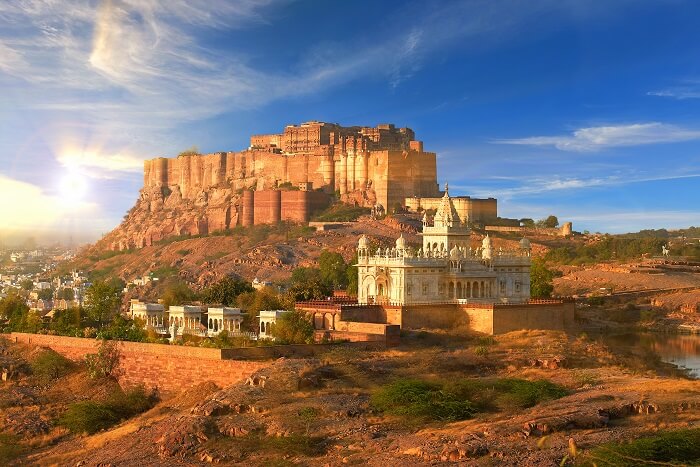 Some enthralling tales of Mehrangarh fort to beguile you

The fort is located on Rocky Mountains and a long and interesting history attached. It was built a year after Rao Jodha became the King which was around 1460. This marvel gets its name from Mehr meaning the Sun and Garh which means fort. The Rathore dynasty worshipped Sun god. It is built on Bhakur-Cheeria which means ‘Mountain of Birds’ and is protected by strong walls that have been withstanding rains, storms, sun and most importantly the fury of the battles in the past, which are visible even today through the canon marks. The structure still stands robust. There are many theories surrounding the construction of the fort. One can choose to believe the story that is most convincing for them. As per the fort history, an ascetic who used to live on the hill got furious at Rao Jodha upon being disturbed and cursed him saying that the fort would face extreme adversities and droughts. The king, as a preventive measure, did many human sacrifices. It is believed that four people were buried alive, one at each corner of the fort. As per another story, a man named ‘Mehran’ was sacrificed by throwing him alive from the hilltop. This truly sounds chilling and makes us go deep into the mysteries to find out the reality. The local guides and people around provide good information about these stories and they will be more than happy to share them with you when you visit the fort! 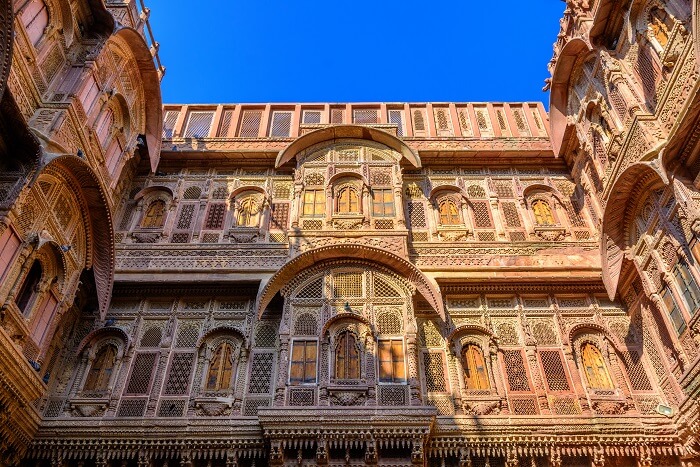 When should you Visit the Mehrangarh Fort in Jodhpur

The royal and history-rich fort is best visited during winters that is from October to March. The weather is pleasant and you can go around and explore the fort to your heart's content. Around this time, you can also enjoy the international festivals that take place. Here are a few important ones to get you started

Festivals in and around Mehrangarh fort

The festivals are indicative of the grandeur and rich culture of the past.

This folk festival takes place in October and promotes the folk-art forms. It is full of traditional music, dance and depicts art of the state. The date is decided as the full-moon night in the month of October. This festival has been supported by UNESCO for encouraging the folk and art culture in Jodhpur. 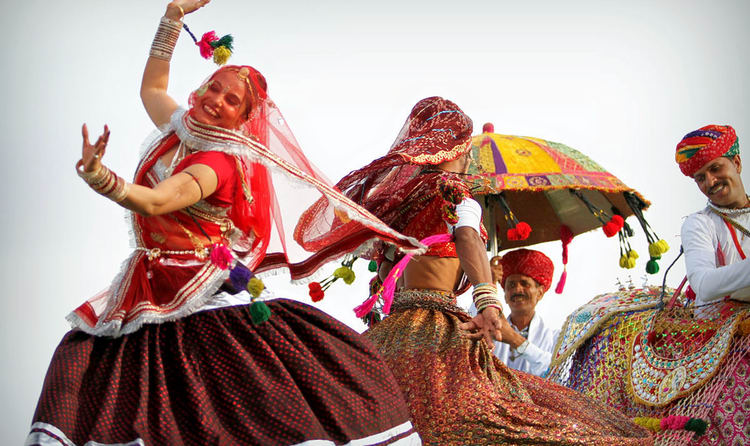 Also Read: Top Festivals in September and October in India

This festival is celebrated in February and is dedicated to keep the Sufi and sacred traditions of India and the world alive and to preserve the culture. 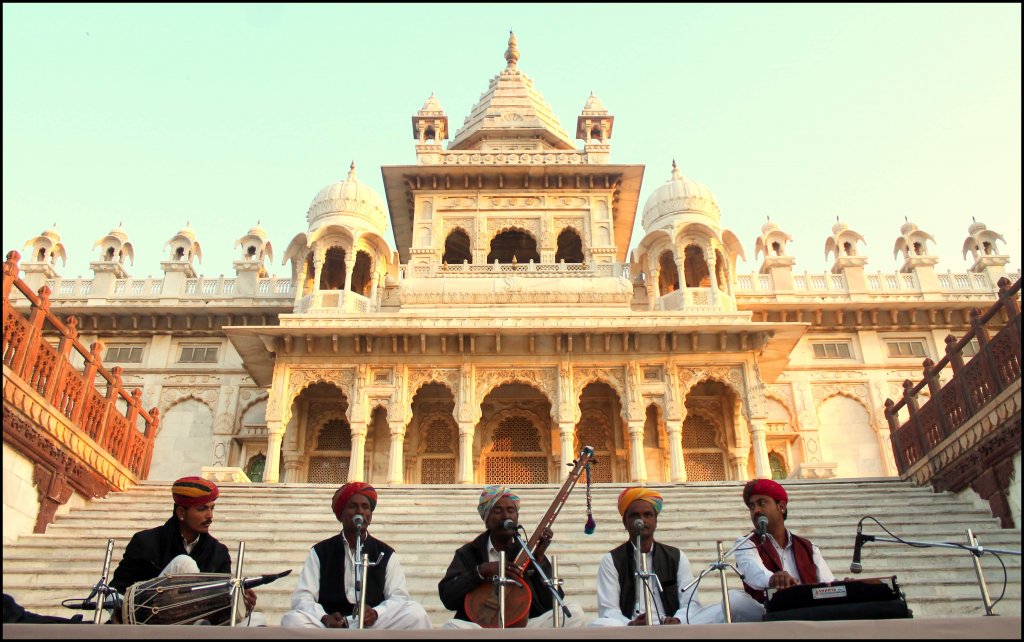 Mehrangarh Fort offers an enthralling "Flying Fox" activity over the wall of the forts. You can get a magnificent chance to fly in the sky. There are total of six zip lines and anyone has to complete all the circuit within 2 hours. Cost of the activity depends on how many number of zips you select. If you love the adventure, don't miss out the ZIP LINING at Mehrangarh Fort. 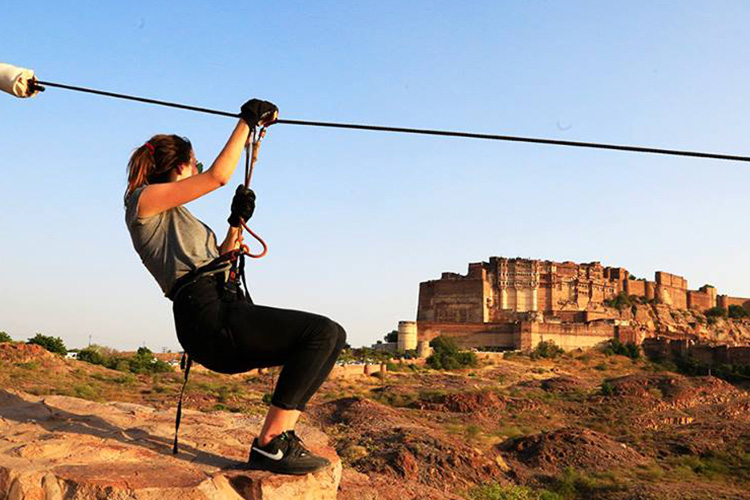 What is inside the fort?

You are sure to fall in love with the architecture of the fort at the first sight itself. On the outside, the fort looks strong and robust with well-founded walls. The interiors are a fine and graceful work of glasswork, seeing which you will be mesmerized and move into the golden epoch.

As the name goes, Sheesh mahal is full of detailed and intriguing mirror and glass work. There is a small enclosure through which the stunning carvings can be seen as the chamber is not open for the general public. The palace walls are embellished with flower patterns and paintings from Indian Mythology. 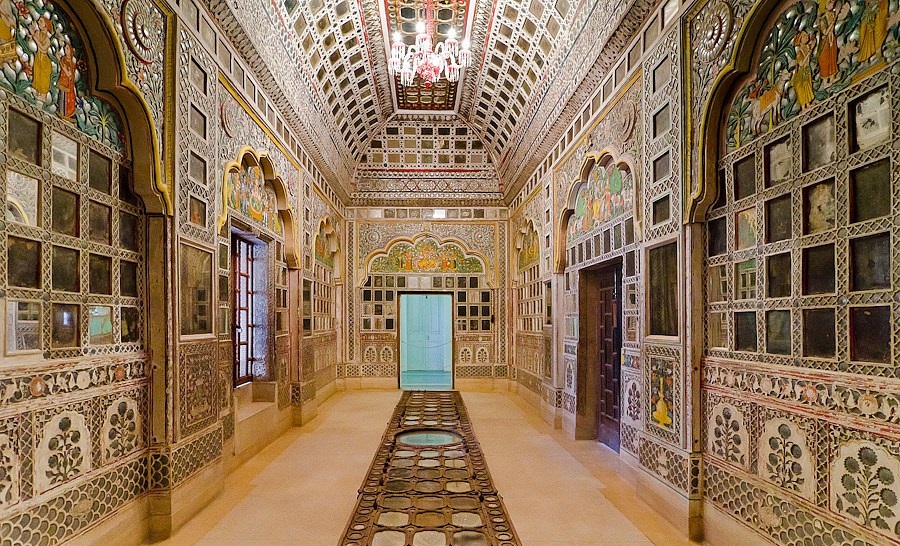 During the golden period, Phool mahal was used as a private party room of the royal men. The walls are covered with paintings that depict the royal family. The ‘mahal’ or palace is full of colours and exhibits positivity and vibrance. The dignity and glory is evident from each inch of the room which shows up in the ceiling, glasswork windows and the carpeting of the floor. 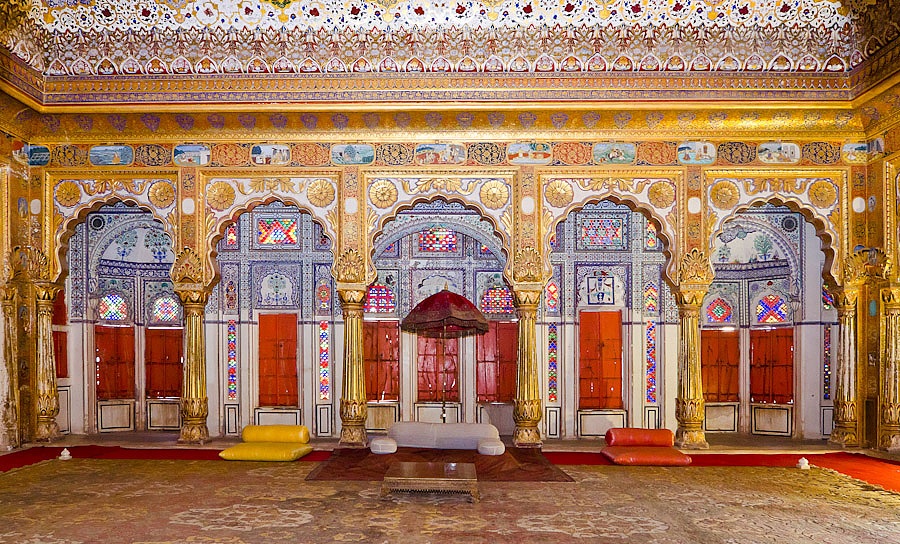 The princesses and queens used to watch the meeting and other proceedings of the royal court from the windows of this palace. The ceilings are beautifully designed in blue colour. Visitors can see some cradles in the mahal from the ancient times. 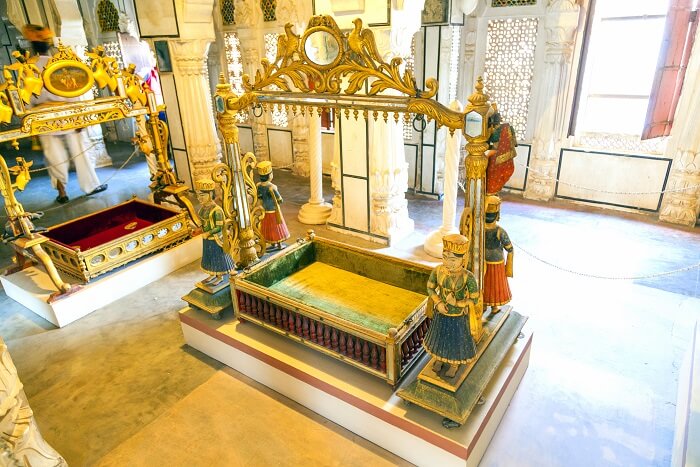 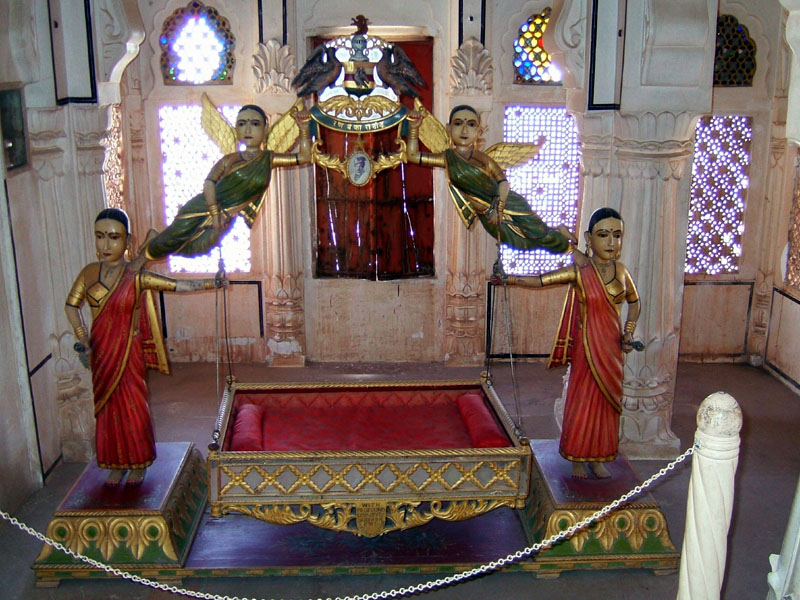 Within the fort, there is a wonderful temple of Chamunda Mataji which is powerful and generates positive vibrations. The idol placed here was specially brought from Mandore by the then king Rao Jodha and established here ceremoniously. The temple is very famous and there are lot of locals and international tourists visiting the temple, especially during Dussehra celebrations. 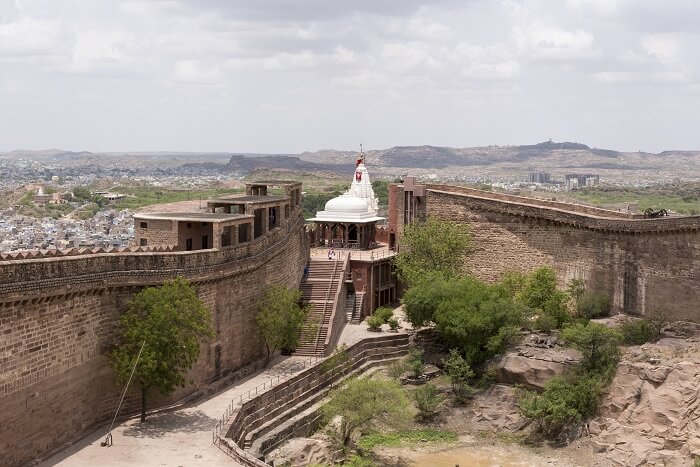 This open-air terrace restaurant serves authentic and delectable Rajasthani dishes with a majestic ambiance. You can view the majestic fort from one side and get a panoramic view of the city from the other side. Enjoy a romantic candle light dinner with your partner and spend some quality time in this restaurant. 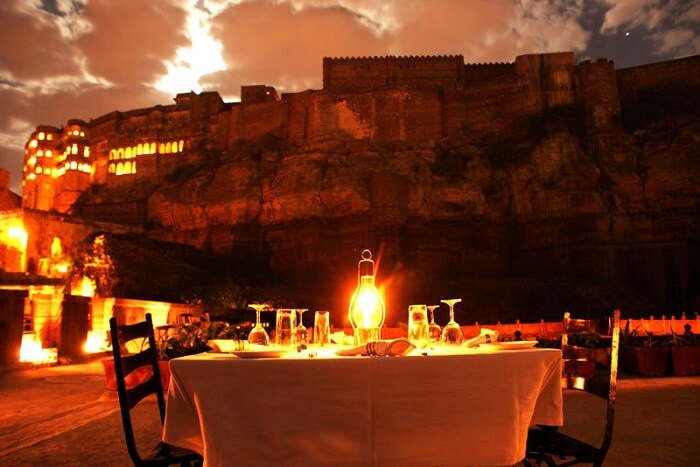 The tickets can be purchased upon reaching the fort and it is open for public every day. Timings: From 9:00 A.M to 5:00 P.M every day. Entry Fee: 60 Rs for Indian and 400 Rs for Foreigners

How to Reach Mehrangarh fort

You will first need to reach Jodhpur which is easily accessible via air and has its own domestic airport and is connected to all major Indian cities. There are also many trains including the luxurious Palace on Wheels, which connects various cities of Rajasthan. You can travel to Jodhpur through bus and car as well and the roads are well-connected and well-documented. Other Luxury Train for Jodhpur Maharajas' Express Train Reaching Mehrangarh from Jodhpur is also simple. Just take an auto-rickshaw or a taxi to the fort. You can take the city buses too but there are very few. The fort is just 2 km away from old town and a 10 km from the city center. Most Popular Places to Visit in Rajasthan: