In Himachal Pradesh cooking has significant impact of neighbouring states like Punjabi and neighbouring countries such as Tibetan cuisine. The locals here incline toward exceptionally tangy and spicy eatables. The spectrum of choices and dishes of Himachal Pradesh mirror the energetic but simple existence of the people of this state. 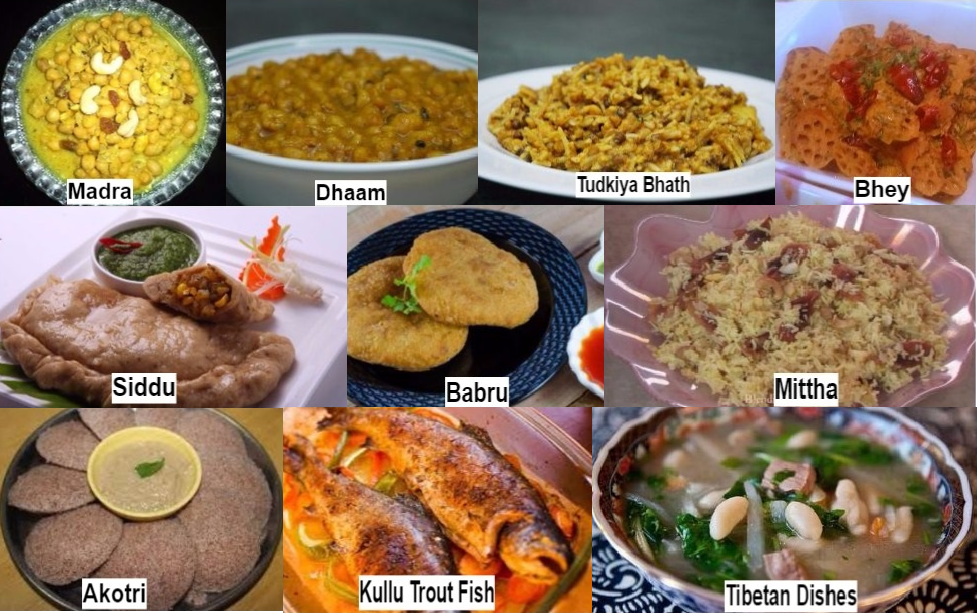 Himachali cooking, especially non-vegetarian is more of red meat and wheat bread with plenty of sweet smelling thick saucy gravies that make the base of several dishes. As of now the popular dumplings or steamed momos are tourists’ favorite as they are now open to taste some of these lip-smacking foods you have to try while in Himachal Pradesh.

It consists chickpeas soaked mostly overnight and vegetables which is seasoned with spices and cooked in oil. A lot of other spices go in and make it a tangy dish. The Madra dish that comes from Himachal’s Chamba district showcases the culture of the state. It is also served to guests at various ceremonies and celebrations.

This is specifically prepared during celebrations and festivals and is found at Chamba and Manali in Himachal Pradesh. It is prepared with nutrition and health in mind using best ingredients. It includes rice, curd, rajma and lentils and flavored with jaggery and boor ki kadi. Moreover, only specialized chefs called ‘botis’ make the dish as it is a delicacy.

This delicious rice dish consists of Pulao prepared in a unique style of cooking with spice, lentils, a variety of vegetables, onions and potatoes and curd. It gives such a delectable taste so a dash of lemon juice and garlic sauce gives it an extra kick. The Tudkiya Bath is mostly found in places of Chamba district of Himachal Pradesh.

The Himachali people enjoy this food that is a lotus step made in a spicy flavor. It is mostly found in almost all the kitchens of the locals. Locally called Bhey it the basis of the dish is the lotus stems that are sliced thinly and prepared with onions and ginger garlic with flour made from grams and this creates a unique lip-smacking dish to eat.

If you are wondering that all of the above dishes are only vegetarian then this one will surely make you happy. The delectable non-vegetarian dish is a traditional delicacy of Himachal Pradesh. It is made by lamb marinated in special way and the preparation is done in a unique way with yogurt, gram flour and different spices and masala. The thick gravy that is the curry in which the meat soaks and then it is consumed. It is one of the best non-vegetarian dishes of Himachal Pradesh. It is more found in the district of Chamba.

The side dish in this state is prepared from wheat flour and is served alongside the non-vegetarian dishes of mutton or vegetables. It is an elaborate preparation and takes time and lot of effort. However, the taste is very delectable and worth the effort of preparation. The flour is left for 4 – 5 hours and then filled with fat and roasted on the direct flame for half cooked flavor. It is believed that the half cooked preparation will help the nutrients to stay and so this is considered very nutritious. Sidu is found especially in Kullu in many local eateries for tourists to taste authentic Himachali cuisine.

The Kachoris are found in various parts of North India. But in this state they have given a new twist to this popular snack. Black gram paste is stuffed into the dough to get a special flat bread called Babru. The delectable crispy bite is served with tamarind chutney and generally served alongside the Chana Madra dish and makes a very healthy snack. This is one of the tourists’ favorite that is found in Shimla, the capital city of Himachal Pradesh.

This is another dish that is specifically made during festivals and celebrations. The Aktori is a basically a pancake prepared with buckwheat leaves and cooked with the wheat flour. This festive speciality is happily loved by the locals of Himachal Pradesh and is made all over the state although it started in the beautiful town of Spiti Valley. You can taste the authentic Aktori in Lahaul- Spiti.

As the name suggests, this special non-vegetarian dish Kullu trout is made from trout fish and is prepared especially in Kullu region. That is how it has the name. At first, the fish is marinated, cooked soft in very less spice so that this way the taste and nutrition of the trout fish remains original. It is served with boiled potatoes or vegetables and is touted to be one of the healthiest and tastiest foods in Himachal Pradesh.

There is a big popularity of Tibetan food in the state of Himachal Pradesh. The main Tibetan cuisine includes Thukpa and is also blend of both local cuisine and the Tibetan cuisine. Moreover it is also more about the Tibetan culture in addition to these foods. Apart from this main Tibetan dish the others include LuchiPoti, Tingmo, Naizha Cake and Tehntuk, not to mention the steamed dumplings called momos. The places famous for these foods are Mcleod Ganj and Dharamshala.

This sweet is served especially on the special festivals and occasions and ceremonies such as weddings, parties, etc. This traditional and authentic Himachali sweet dish is a mixture of rice soaked in sweet and filled with raisins and dry fruits. It is prepared all over the state of Himachal Pradesh.

This is a tangy and sour flavoured authentic Pahari Dish that is served alongside rice. It is also served together with the Madra dish. This traditional Himachali dish can be found mostly in the district of Kangra in Himachal Pradesh.

Although momos are a hot favorite with the locals and tourists you have try these authentic scrumptious delicacies to truly experience the culture of Himachal Pradesh. So, the next time you go on a holiday to Himachal Pradesh do taste these sumptuous dishes in various places.

Most Searches of Himachal Pradesh