Buddha Park, located in a small tourist town in the southern portion of Sikkim, is a must-see for all visitors. This well-known destination acts as a significant landmark for the Buddhist community, its sublime beauty, which is surrounded by a lush eco-garden, also aids in the promotion of pilgrimage tourism in Sikkim. International and domestic tourists alike are nearly completely engulfed by tinkers and tourists admiring the visual attractiveness of the memorial and its surroundings. Cho Djo Lake is also placed within the compound, making it a more appealing destination. 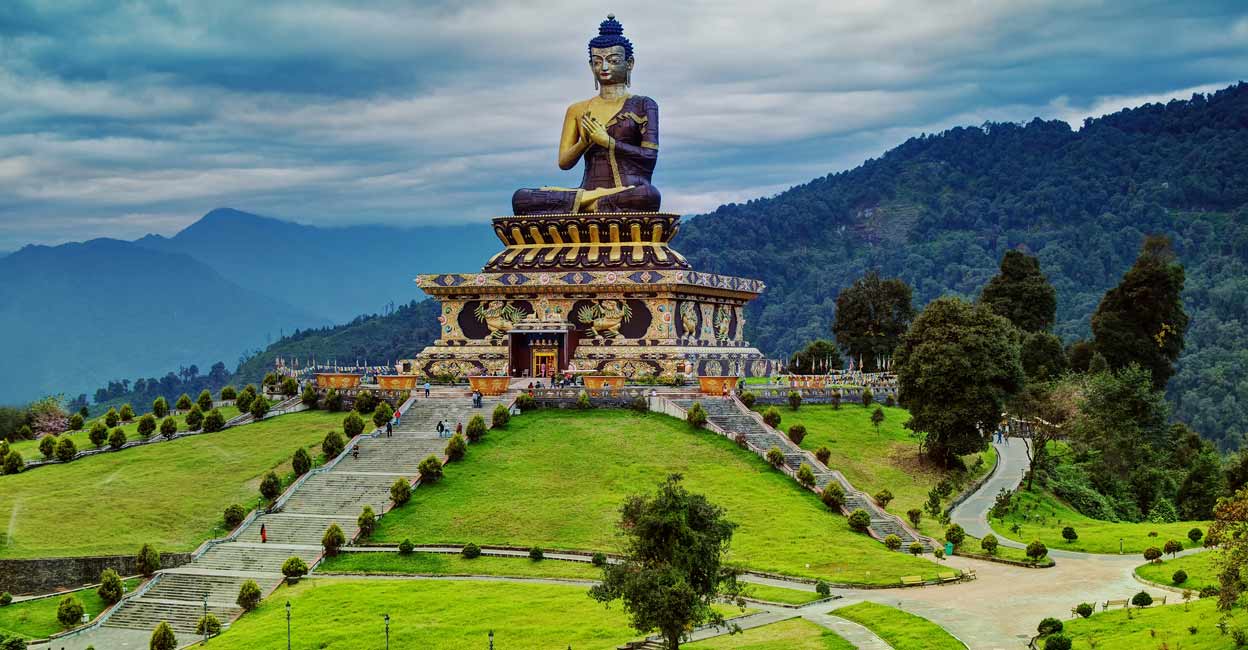 The Ravangla taxi stand is one kilometer away from Buddha Park. 'Tathagata Tsal' is another name for this lovely park. The location was chosen within the Monastery's broader religious complex, which is also a centuries-old pilgrimage attraction. On March 25, 2013, the statue of Buddha was devoted to the 14th Dalai Lama and serves as a stop on the "Himalayan Buddhist Circuit." This park's Buddhist circuit was built as part of a state government endeavor to boost pilgrimage and tourism in the area. The Buddha statue commemorates the 2550th anniversary of Gautama Buddha's birth. This statue was built and unveiled on the spot thanks to the collaboration of the Sikkim government and the people of the state. It is a captivating park where visitors may enjoy abundant peace, as well as pleasant surroundings and comfy walkways for strolls.

The Ravangla residents built this enticing Buddha Park, which features the most wonderful Sakyamuni Buddha statue that can be viewed crystal clear from all parts of Southwest Sikkim gardens and a few sides of West Sikkim. It is a charming park where visitors may enjoy generous peace, as well as comfy roadways for relaxing strolls and nice surroundings. The park is surrounded by other mysterious surprises. Within a spiral-shaped gallery, the life of Gautama Buddha is depicted in two separate ways. The Park has a sacred touch to it because the land chosen for its development was Rabong Monastery. A magnificent lake called Cho-Dzo is surrounded by woods.

The park also includes a meditation center open to tourists and monks, as well as homes and a museum depicting Buddha's life narrative. The Buddha statue is visible from all directions in southwest Sikkim, as well as from a few spots in West Sikkim.

When is the Best Time to Visit Buddha Park? 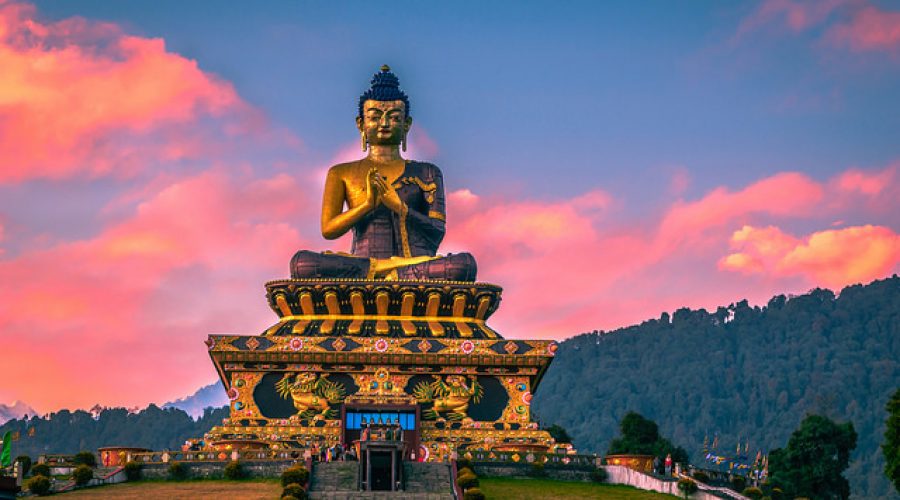 From April to June is the best season to visit this mesmerizing park, but for snow enthusiasts, September to November is ideal for seeing an amazing glimpse of the snow-covered Himalayan Mountains as well as the bright colorful flowers that beautify the Park, which will leave you speechless.

The summer season in this area begins in April and lasts until the end of June. This time of year, the climate is ideal for visitors to soak up the atmosphere. During this time, the temperature fluctuates between 25° C and 15° C. There is rain in the forecast on occasion, which adds to the pleasantness of the weather. This is the greatest season to visit whether you want to go on a fun sightseeing excursion or participate in an exciting outdoor adventure.

The monsoon period, which begins in July and ends in September, is marked by heavy rains and strong winds. During these seasons, the temperature ranges between 17° C and 12° C. During this period, the entire city of Ravangla experiences rain, making outside activities more difficult.

Ravangla's winter season begins in the first week of October and lasts until the end of March. The winters in this part of the world are harsh. This season's temperature ranges from 3 to 10 degrees Celsius. The days are cold and snowy, and the nights are bitterly cold. It causes prolonged snowfall during the winter season, with temperatures plummeting to sub-zero. The winter season is not the best time to visit this location, but if travelers insist on visiting Ravangla-Buddha Park during this time, we recommend that they bring plenty of warm clothing.

What is the Best way to Get there? 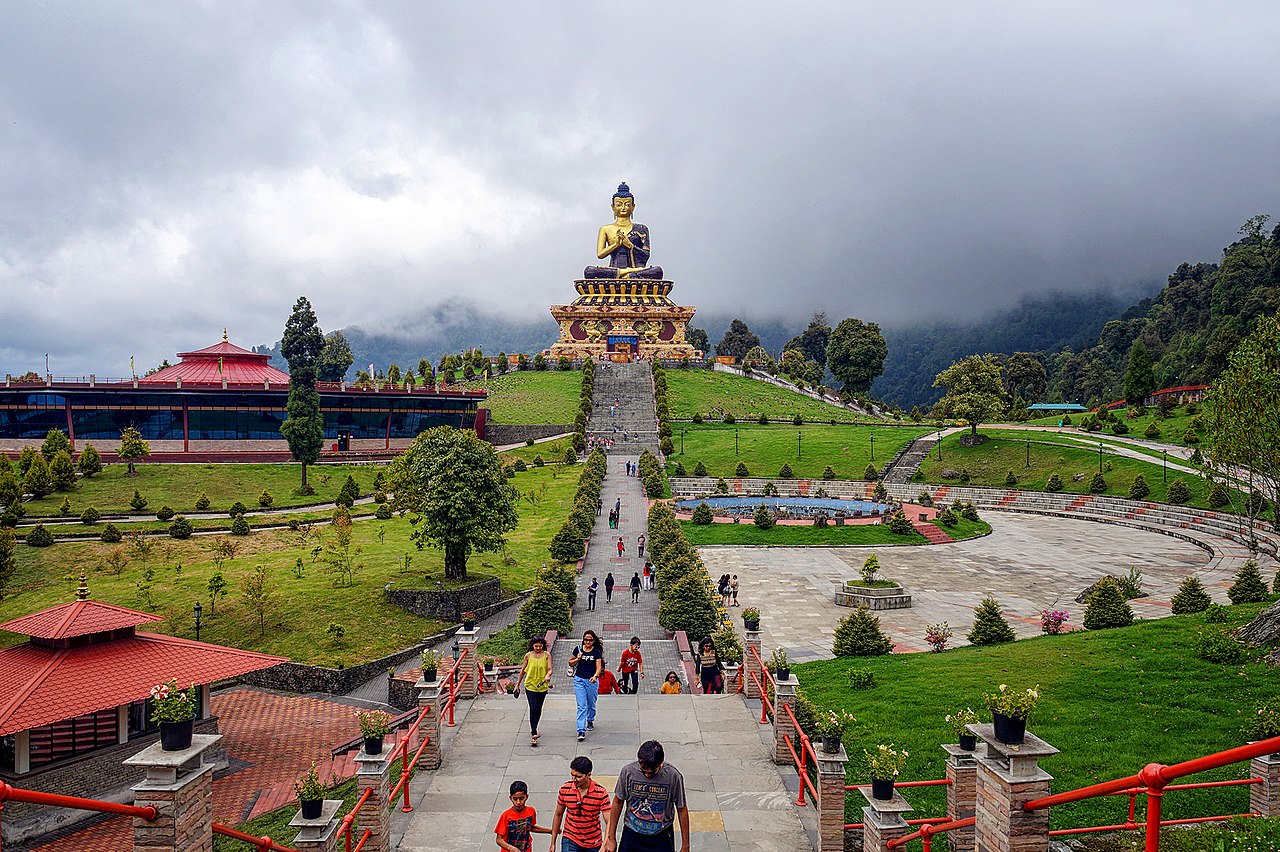 The nearest airport is at Bagdogra, West Bengal, which is around 125 kilometers away from Ravangla. Sikkim also boasts its first commercial airport in Pakyong, East Sikkim, however, the weather frequently prevents it from operating. If you're lucky, you might be able to catch a direct flight to Pakyong.

The nearest railway station is in West Bengal, at New Jalpaiguri (NJP), about 121 kilometers from Ravangla. You can take a taxi from Namchi or Singtam to Ravangla, which takes around 4-5 hours.

The below Dos and Don'ts will help you have a good time at Tathagata Tsal.

To Explore this famous Buddha Park Ravangla then plan a trip to Northeast India.