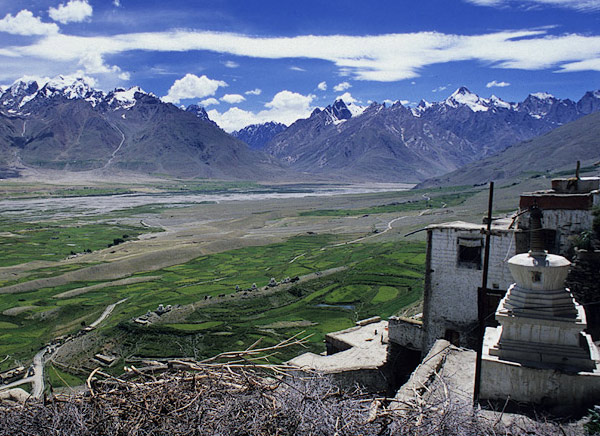 This monastery is also known as Karsha Gompa and it is part of the Buddhist monasteries and it is located in the Padum Valley found in the region of Zanskar in Jammu and Kashmir. This monastery was founded by Phagspa Shesrab, who was a translator and it is also called Karsha Chamspaling. It is part of the Yellow Order Hat or Gelugpa Order of the religion. This is the most important and oldest monastery located in Zanskar and there are some ancient carvings in the rock that can be seen here as well as paintings and much more.

There are plenty of shrines here that are gorgeous along with some stunning paintings that were painted by the hand of the Lama Dzadpa Dorje. There are also some relics from the life of Dorje Rinchen here and there are some 100 monks that live here. It is run by the Dalai Lama’s younger brother and in the chapel behind the seat saved for the Dalai Lama is the Lhaso Cho Rinpoche that dates back to 1960. There are also numerous wall paintings there that show the Rinchen Zangpo era.

The main attraction that is at the Karsha monastery is the temple, which has a stunning cloth painting that was made from colorful and gold threads. This image depicts just one of the days in the life that Buddha enjoyed and he is surrounded by some of the tutelary deities. There are plenty of attractions that you can enjoy when you visit the Karsha monastery, including some of the nearby temples, such as Lhakhang Karpo and Thugsjechhenpoi Lhakhang. There are also a few more monasteries that you can visit when you are here, such as Phagspa, Purang and the Khagsar monastery. Dorjezong is also a nearby nunnery that can be visited.

You can also wander around the Zanskar River and there are plenty of activities to do here as well, including rafting and more. The 30 kilometers between the Karsha village and Remala are thought to be Asia’s “Grand Canyon” and is in the category of class II when it comes to rafting. If you want an adventure, then you can start rafting in Remala and come on down the river to see the monastery afterwards.

How to Reach Karsha Monastery

The best way that the Karsha Monastery can be reached is by arriving in Padum. Once you have reached Padum, then you would be able to drive your personal vehicle or hire a car or taxi to drive you to the monastery. You need to plan your trip so that you can spend a few days in the area, but to do that you should book a car to bring you to the monastery. Also, if you are looking for an adventure, then you can start your trip in Remala and hit the rapids and enjoy a rafting trip that would end with you exploring the temple and the monastery.

The ideal time to visit this monastery is in the 6th month on the Tibetan calendar, which is when a festival is held on the 26th and 29th days of the month. This festival is called Gustor and there are specific events and activities that happen at this time, including the sacred cham dance with masks happens. The Gustor festival is the time when the commemoration of good prevailing over evil is celebrated. Also, during the 11th month of the calender, which is most often in January, another festival happens on the same days and the masked dance is once again performed.