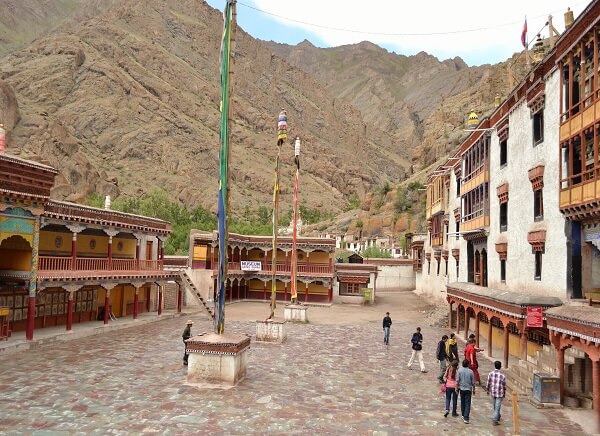 If you are planning your holiday in Ladakh and thus looking for some splendid tourist attractions then Hemis Monastery in Ladakh would definitely win your heart. Hemis monastery is one of the popular tourist destinations in Ladakh. This monastery is stationed on the west bank of the peaceful river Indus. The location lies 45 km from Leh city. This is the largest as well as amost favored monastery in Ladakh was constructed in 1672 AD under the reign of King Singge Namgyal. Hemis monastery host an annual festival called Hemis Tsechu attracts plenty of tourists across the globe. During this colourful day-long festival the local resident lamas glorify the victory of good over bad and perform dance wearing holy masks.

Hemis monastery owns excellent architecture which attracts numerous tourists each year. If you wish you can pay homage to the large structure of Guru Rimpoche and Lord Buddha. Else there is also a museum that possesses a huge collection of Buddhist structure, statues and several ancient items that reflects the existence of rich culture during the ancient period. Apart from that, you can visit the Hemis High Altitude Wildlife Sanctuary. This sanctuary is at the altitude from 3300 m to 6000 m above the sea level. This place is considered as the largest park in the South Asia and also the highest park in the world. At the sanctuary, there is a chance of spotting rare snow leopard, Ibex, and other wild animals.

How to Reach Hemis Monastery

If you are confused about how to reach Hemis Monastery then you do not need to worry as Hemis is well connected by road with the rest of India. Else there are also active bus services available by the government (especially the Jammu and Kashmir Road Transport Corporation) as well as private authorities. To reach Hemis you would not find any direct flight or rail connectivity. The nearest rail station to connect Hemis is Katra that lies 277 km away from Hemis and nearest airport is Leh Rimpoche Airport that lies 42 km from Hemis Monastery.

Food to Try at Hemis

There are a number of different platters are found in Hemis. Some of the popular foods at Hemis are Thukpa which is simply a thick soup with vegetables, Khambir which is a local bread, Pava made of Sattu, Skieu made with mutton, flour, andveggies, steamed dumplings stuffed with vegetables meat and chili sauce and sandwiches made with apricot jam.

If you are thinking to visit Hemis monastery then try to book your tickets for the months of June or July. This is because at that time the Hemis Monastery is decorated by the lamas and two-day annual Hemis festival takes place. The popular Cham Dance and the display of age-old Thangkas during the festival is really a spectacular and enjoyable event to experience. Else summer season from April to June is also the pick hours for tourists.