Bhutan despite being the picturesque and serene place that it is, it also calls out to the adrenaline junkies and adventure seekers with its sweeping terrains and magnificent mountains. The perfect weather, the otherworldly beauty, and the spectral and glacial mountains call out to every trekker's heart. 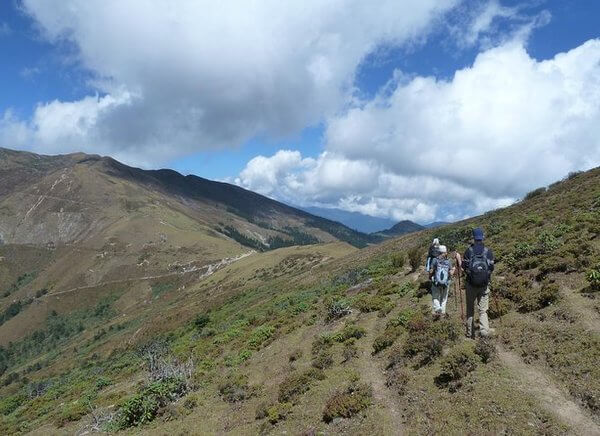 A few reasons why the next trip a trekker should plan should be Bhutan are:

What Is The Best Time For Trekking In Bhutan?

The best time to visit Bhutan for a bit of trekking adventure is in the Spring Months of March to May and the Autumn months of September to November. Springtime is the most crowed time whereas the Autumnal months are the most favorable in terms of weather. Rain is consistent and will be found in both the trekking seasons. During autumn the nights are cold but the sunny daytime makes for pleasurable daytime temperatures.

The temperature varies at about 20 C in the afternoon and falling below 5 C at night.

Bhutan offers a wide variety of treks that are well planned and are accompanied by trained professionals who take care of the basics so the treks can be enjoyed to their full extent.

With a fully equipped crew and all the gear needed to trek we can explore the lush forests with a variety of flora and fauna and across passes with the pristine mountains and sprawling terrains as the panorama. The trails are well maintained and untouched and the wilderness undisturbed, Bhutan offers a variety of treks from a three-day trek to a taxing month-long trek to satisfy every kind of trekker.

Every trek is planned as a camping trip, therefore, there are no lodges or guest houses along the paths and trekkers have to sleep at designated camping sites, meals are provided by professional chefs who prepare hot meals for the campers. There are no porters and the equipment is carried by horses, and in case of snowfall and for higher altitudes yaks are used to carry supplies.

Most Popular Treks in Bhutan

It is one of the greatest and the most difficult treks of the Himalayas. The trek has gained the reputation of being the most difficult because of the altitude, duration, and distance. More people climb Everest than complete this trek.

It takes 26 days and is undertaken by a very small group of people each season, it accesses Lumana, the most remote region of Bhutan. The highest altitude is 5320 meters. It crosses 11 passes between the borders of Bhutan and Tibet some as high as 4000m.

This trek is the most magical and beautiful in Bhutan, the trek can be taken around the Jumolhari mountain festival the annual celebration of the people and culture of the local people. The first couple of days of the trek go along the Paro river valley to the Janagothang, a base camp from where the splendid view of Mount Jumolhari, which is famously known the second-highest unclimbed peak in the world.

En route, we pass through high pasture lands where yaks are herded we also pass Lingzhi, the highest settlement in the north, Several other high passes with pristine and glacial mountains are seen. The trek takes 8 days to complete and which starts in Paro and ends in the capital city of Thimpu.

It is known to be one of the most beautiful treks among all the treks in Bhutan. It runs along the border of Tibet and offers the pristine, peaceful lush land spaces that are native to Bhutan. Along the way, we pass through beautiful alpine meadows and also the majestic views of Mount Jumolhari and the Tsherimgang.

We also pass through the semi-nomadic village of Laya and get to absorb the culture and traditions of this village. We are also able to see indigenous animals such as blue sheep and takins along the trek.The duration of the trek is 15 days and it ends in Gasa.

This is a relatively short trek as compared to some of the other treks offered and therefore results in fewer trekkers along the way. It passes through several glittering high altitude lakes and hence the name thousand lakes trek.

The most exciting part of the trek is the sightings of some of the highest Himalayan peaks like Mt Everest in Nepal, the Jumolhari, the Tiger Mountain in Tibet and many more. The trek takes around 5 days and four nights.

This one of the most unequaled short treks in Bhutan. It follows an ancient trading route and connects the valleys of Paro and Thimpu. We also go through alpine yak pastures, glittering lakes, and abundant rhododendron forests. The trail starts by passing through apple orchards and the ruins of Jele Dzong, which was a fortress in the past which is located on a grassy ridge and offers the magnificent view of Mt Jumolhari.

The trails then pass through several passes including the infamous Phume le. along the way, we pass yak herders and the can feast our eyes upon the majestic Himalayas along the Tibet border. The final stretch goes through the peaceful and life-changing Phadjoding monasteries. The trek takes about 5 days to complete.

This is not a very popular trek as it is a comparatively newer trek but that does not mean it is any less beautiful. The trek passes along the Haa mountains in western Bhutan and is very unique as it has not trekked along a lot.

The highlight of this trek is the pristine turquoise colored Nub Tshonapata lake and the green forests The trail slithers around juniper forests and beautiful passes as high as 4930 meters. This trek starts in Haa and ends in Paro. This trek takes about 5 days.