Rajasthan is the land of kings. Many kings have ruled this state in pieces and as a whole. This is the main reason for varying styles of historic marvels in this place. There are a lot of historic places in this state that are termed as iconic attractions for a reason. This article will focus on the top 12 historic places that serve as a purpose for visiting Rajasthan. Anyone who visits this state should visit these places to enjoy the real richness of this land.

Many tourists visit this fort for enjoying elephant ride around the fort. This fort is located in Jaipur. This fort stands as an architectural marvel of yesteryear Indian architects. This fort was built in 17th century in a mixture of Hindu architecture and Muslim architecture style. Light show is conducted every evening. This fort has palaces, temples, gardens and many others. Complete information about Amer Fort Visiting timings, Entry fee and Travel Packages 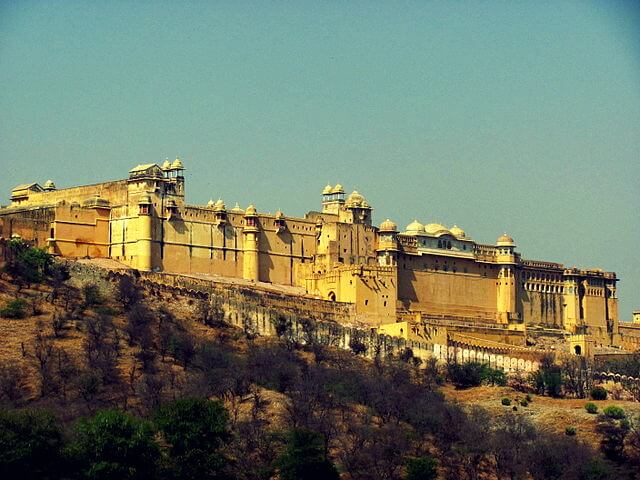 A temple inside this fort was built in 16th century. This temple of Goddess Kali is an important place for Hindu travellers. The entrance gate of this fort is a marvel. This gate is surrounded by gardens of Mughal style. Sheesh Mahal is a hall filled with thousands of mirror tiles. Other important places in this fort are Jas Mandir, Aram Bagh, Jas Mahal, museum, Maota Lake and others.

City Palace is located in Jaipur. It was built in 18th century. This palace has an architectural style that mixes Indian and European style. The first main element in this palace is the entrance. There are three entrances and each one is a beauty by itself. Mubarak Mahal used to be the reception of the palace. Complete Information about City Palace Jaipur – Visiting timings, Entry fee, History 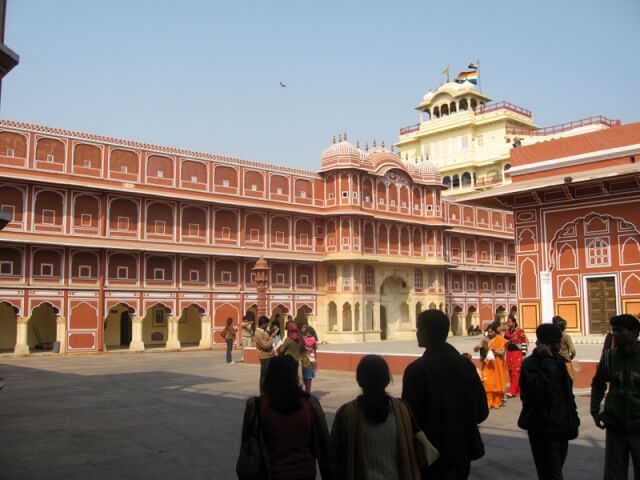 Today, this Mahal houses costume museum and other exhibits. In this museum you can find a lot of royal clothes that was worn by Sawai madho Singh, king of the palace. It is said that he weighed 250 kg and had 108 wives. Chandra Mahal is famous for the peacock gate. Other important spots in City Palace are Pitam Niwas Chowk, Green Gate, Lotus Gate, Rose Gate, Diwan –I-Khas, Siwan – E- Aam, Maharani palace, Govind Dev Ji temple, Bhaggi Khana and others.

Hawa Mahal is also called as the palace of wind. The palace gets this name because of the screened walls which when opened will gush wind in and out of the Mahal. These screens were built to let women inside the Mahal watch activities on the street. The Mahal is made of pink and red sand stone. It was built in 18th century in the structure of a honeycomb. Find here Information about Hawa Mahal Visitor Timing, Entry Free, Inside Attraction and Packages 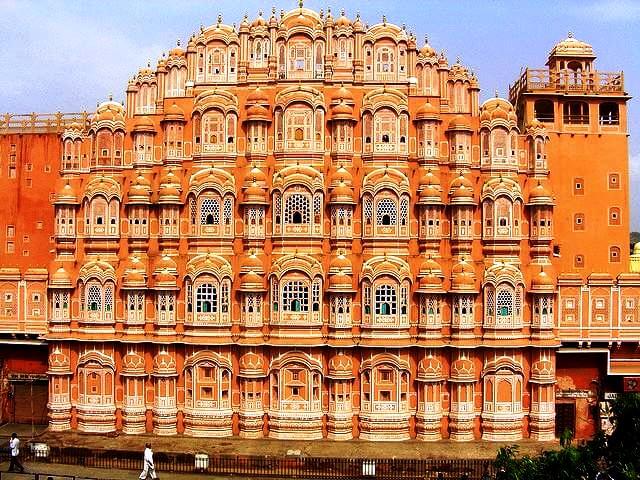 There are 953 windows with intricate latticework. As stated before, if all windows were open, you can enjoy a real flow of wind. But, most of the windows are closed to avoid accumulation of dust. The top attractions in this Hawa Mahal are the courtyard, windows, fountain, imperial door and archaeological museum.

This fort is also called as Victory Fort. It is located in Jaipur. The main element that attracts people to this fort is the Jaivana Cannon. It is the largest cannon in the country and it is placed on a tall tower that focuses Amber Fort. This fort was meant to stand as a guarding tower for Amer fort and other parts of Jaipur. Another rumor that populates this fort is that there is treasure hidden inside the fort. Apart from these, this fort has many palaces, temples, museum, gardens and others. Read here about Jaigarh Fort Jaipur - Visiting Timing, Entrance Fee 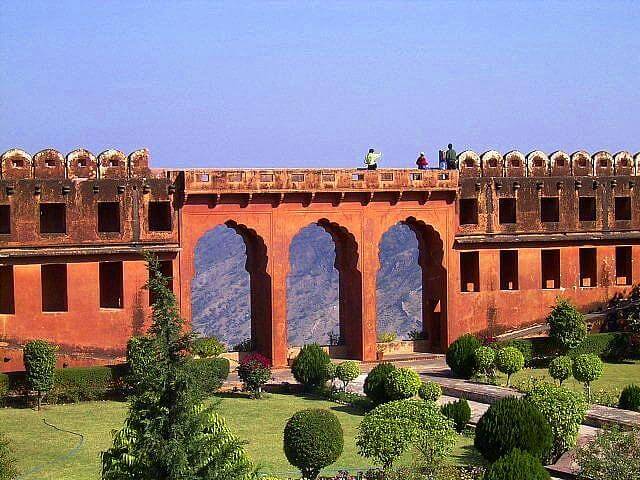 This fort withstood a lot of damages even after 100 years from building it. It used to house many residential areas, water reservoirs, granary, tall tower and others. Most of those do not stand today. A few treasures were dug and retrieved by government from this fort. Though this is a plain fort when compared to other historic places, it is one of the best structures of Jaipur kings that served its purpose. You can get a panoramic view of the whole city from the top of this fort.

This fort is located in Aravalli Hills, Jaipur. This used to be a royal retreat during 18th century. This fort’s name can be loosely translated as abode of tigers. This fort is surrounded by forest and mountain background. Know about Nahargarh Fort Jaipur - Visiting Time, Entrance Fee, Attractions 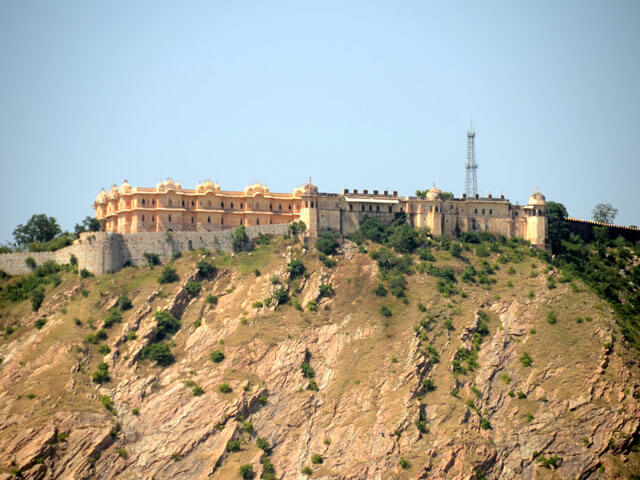 This is the only fort in the country that was never attacked at all. It gave shelter to Europeans during mutiny. This fort has many palaces, temples, open air enclosure and many others. This fort is near to many tourist attractions like Hawa Mahal, Jaigarh Fort, Jal Mahal and others. Thus, you can spot most of these attractions from the top of Nahargarh Fort.

This fort is located in Chittorgarh. It is a glorious fort that stands on the peak of a hill. This fort covers 700 acres of land. This fort has seen many battles and stands as a reminder of braveness and chivalry of Rajput. It is said that once a king was smitten by beauty of a Rajput Queen and invaded this fort to win her. The queen and her maids killed themselves when the fort wall was destroyed by enemies. 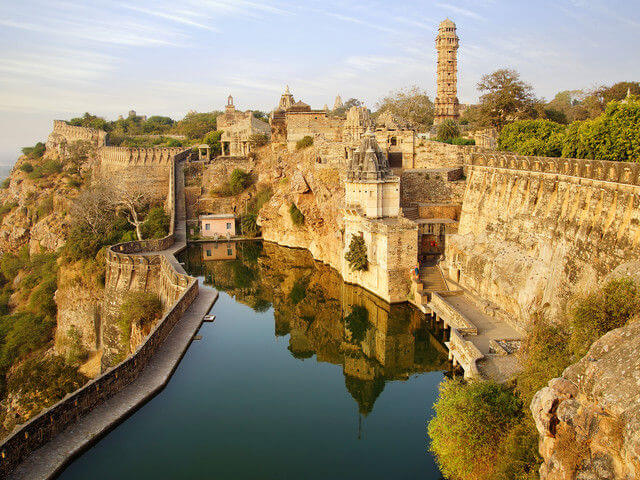 This fort is considered as the pride of Rajasthan. There are 22 water bodies inside this fort today. At its prime days, it was said that this fort had 84 water bodies. Important attractions in this fort are tower of victory, tower of fame, Gaumukh reservoir, Padmini Palace (palace of the Rajput queen in the above story), Rana Kumbha palace, Meera temple and many others.

Also Read : Top 40 Places to Visit in India in April

This fort is located in Bikaner. It was built in the late 16th century. This fort is one of the very few forts that are not built on hilltop. This fort has been attacked several times by different rulers and never had fallen. You can find the marks of cannonballs on the south face of the fort. Inside the fort, you can find palaces, temples, balconies, kiosks, courtyards, museum and others. Karan Mahal is famous for its stained glass windows and fluted wood columns. Anup Mahal is the grandest of all. 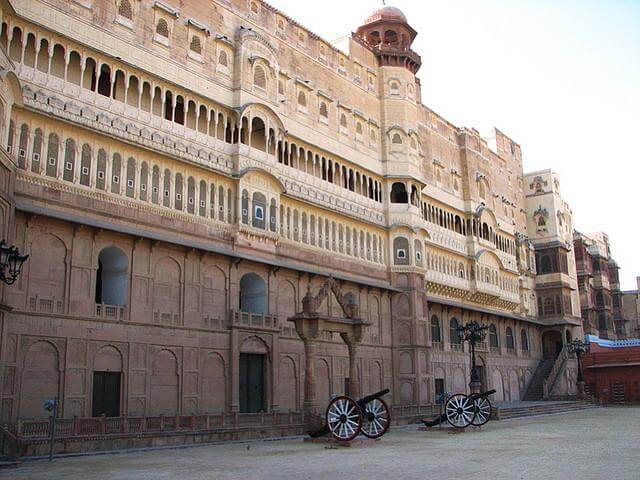 This palace is covered with golden leaves, Italian tiles and lattice windows. Chandra Mahal is another luxurious palace in this fort. The fort museum has a collection of royal belongings including headgear, dresses, jewels and portrait, war drums, palanquins, miniature paintings, armours and others.

This is also called as golden fort. It is one of the largest forts in the world and a major attraction in Jaisalmer. It was built in 12th century. It is called as the golden fort because the fort glows yellow in the sun because of sandstone walls. This fort conceals many palaces, havelis, temples, residences and others. The fort stands in the Thar Desert on Trikula hills. It has four entrances and each guarded by cannon. 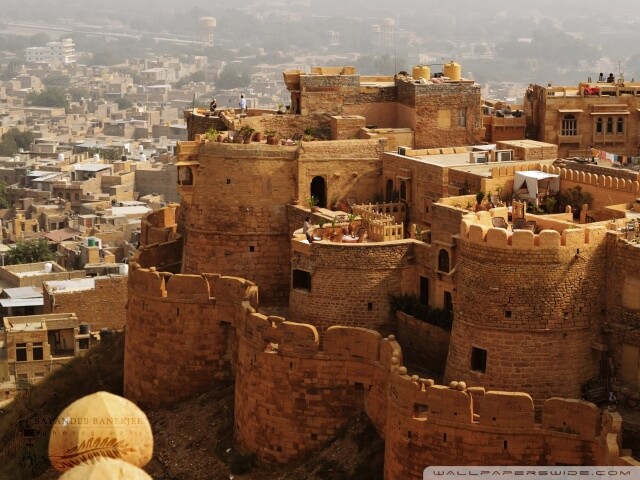 There is a royal palace, Laxminath temple, merchant havelis, museum and many others. A few structures inside the fort have been fallen to ground. This fort had a wonderful water drainage system even in the 12th century. On a hot day, this fort reflects a brownish yellow colour and camouflages itself from threats. By sunset, the fort comes to the colour of honey gold and blends with the desert sand. This is one of world heritage site and an interesting hill fort in Rajasthan. An important activity is to watch the fort after sunset. The lights would uplift the beauty of the hill fort.

Mehrangarh fort is one of the largest forts in the world. It is located in Jodhpur on a hill top which is 400 meter above the ground. The walls of this fort are very thick and you can still notice many cannon ball marks on the walls. There is a museum inside this fort which has a collection of jewels, palanquins, arms, costumes and other belongings of royal family. 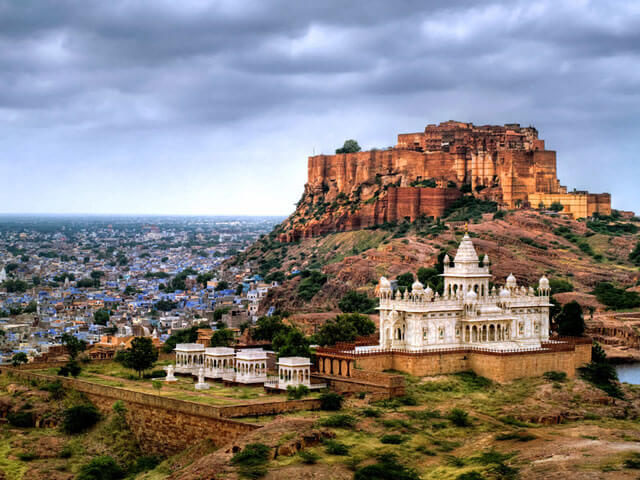 This fort was built in 15th century and has seven gates. One of the gate has handprints of a queen who killed herself after her husband fell. Other important elements in this fort are the pearl palace, flower palace, mirror palace, Sileh Kanna, royal cradles, Daulat Khanna and others. You can find a lot of exotic paintings and turban gallery in this fort. Camel riding and zip line riding are some of the activities to enjoy in this fort. Chamunda Devi temple inside the fort is very famous and an important pilgrimage spot.

Read More : Travelling Rajasthan: Know What Every Traveller Does in Rajasthan

Umaid Bhavan Palace is located in Jodhpur. It is one of the few forts where you can rent a room. It is a luxury heritage fort hotel that is maintained by Taj Hotels, today. But, years before, this was a unique palace with beaux art style. According to history, people of Jodhpur were struggling with drought and the king Pratap Singh wanted to employ them and provide them food. Thus, he ordered them to build this lavish building. It is located on Chittar hill where there is no natural water supply or vegetation. 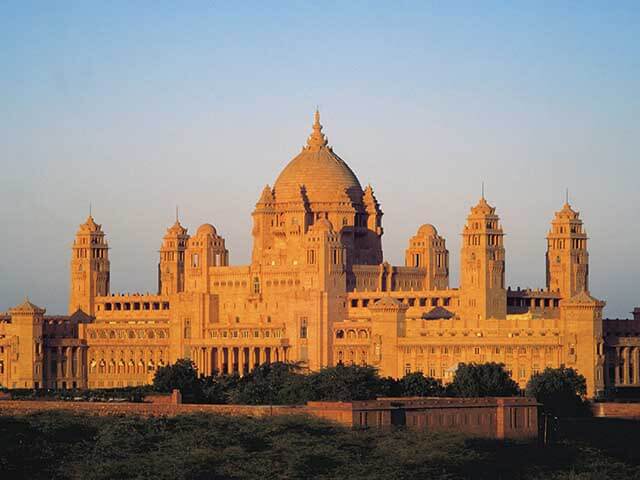 This palace has 347 rooms, banquet hall, many courtyards and others. Today, this palace is divided into Taj Palace Hotel, museum and residence of royal family. The place is lavishly built with granite, sandstone, marble floors and filled with arts of deco style. The museum has a collection of miniature painting, royal belongings, elegant murals, armours, porcelain wares and many others.

This is a 10th century fort located in Sawai Madhopur inside the wildlife sanctuary. It is located on the hills of Thanbhore. This fort encapsulates many temples, palaces, barracks and other attractions. The wildlife sanctuary used to be the hunting ground for kings. There are three temples inside the fort that were built in 12th and 13th centuries. There is also a Jain temple for Lord Sumatinath and Sambhavanth. 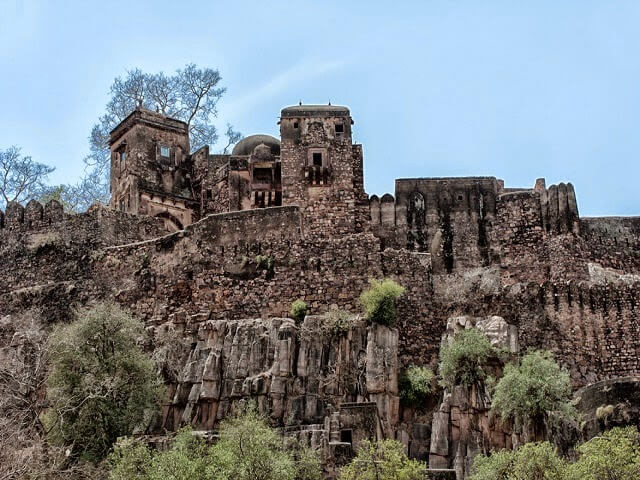 The history of the fort is written on a wall inside the fort. The fort has cobbled pathways, gardens and other attractions inside. Since it is located inside the national park, it is one of the important attractions for those who take up safari inside the sanctuary. You can find Surwal Lake, Kanchida Valley and many other attract near it.

Kumbhalgarh fort is located in Aravalli hills of Rajsamand district. This fort has the second longest wall after the Great Wall in China. This fort was built in 15th century and this is the birth place of famous Maharana Pratap. This fort is a world heritage site and second largest fort in the state. 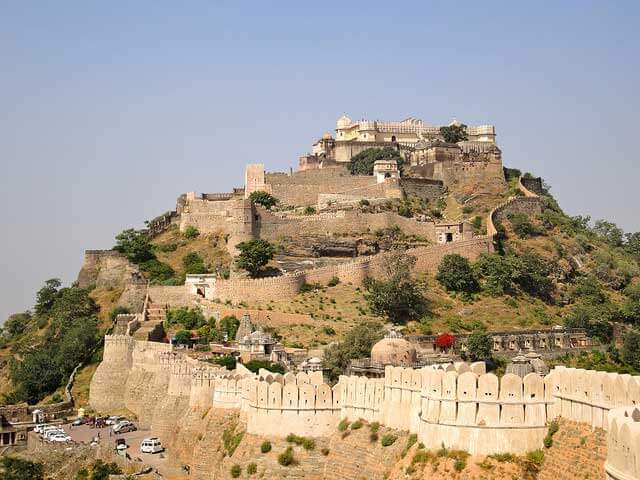 There were more than 360 temples in the fort and only a few exists today. According to legends, kings used to light a massive lamp with 50 kg of ghee and 100kg of cotton in the fort for the farmers to work at night. Many dance and other celebrations occur in this fort during festivals. The three day annual celebration includes heritage fort walk, turban tying, tug of war, mehandi and many others.

These historic places are at its prime beauty throughout the year. But, people usually prefer winter season (from end of October to February) because of cool and pleasant climate. Popular Tour Packages to Explore Rajasthan : Click for more tour Packages of India by Destinations, Duration, Themes and Regions.