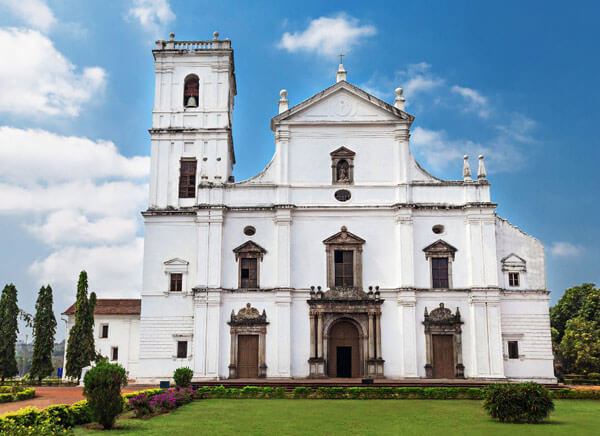 SE Cathedral or SE Catedral de Santa Catarina is the Latin Rite RC Cathedral of Archdiocese of Goa and Daman. This cathedral is a famous landmark built with Portuguese Manueline style. The church is 76 m in length and the frontispiece is around 35 m high. This Church was built by Portuguese, who was ruling Goa during that reign. This church is considered as the largest one in the continent.

The word ‘Se’ means ‘see’. It was a symbolic structure built to showcase the Portuguese’s victory over an invading Muslim army in the early 16 th century. The exact day of that victory is celebrated as the Feast of Saint Catherine, in this church. For the construction, the expenses were tallied by funds procured by selling Crown’s properties.

In the mid of 15 th century, the then-governor of Goa started to enlarge the structure and the construction was completed in mid of 17 th century. This structure had two towers. A little after 120 years from the year of construction, one of the towers was collapsed and was never built again. In 20 th century, the Pope Pius XII presented the honorary ‘Golden Rose’ to the cathedral, which is now placed on the tomb of Saint. Francis Xavier, inside the cathedral.

No Entrance fee is received for entering this structure. However, the tourists are requested to wear decent clothing to avail access into the Cathedral.

SE Cathedral is the cathedral of the Latin Rite Roman Catholic Archdiocese of Goa and Daman and the seat of the Patriarch of the East Indies located in Old Goa.

The Se Cathedral holds a large bell called as Golden Bell. This bell is famous for its strong tone. It is said to be one of the best bells in the world and the largest in Goa. The main altar of the church stands as a dedication of Catherine of Alexandria. You can find numerous paintings on the sides of the altar. Just right to the altar, you could find the Chapel of Cross of Miracles. It is said that, at this very location, a vision of Christ appeared in the middle of the cross in 17 th century.

The church has six panels with scenes of Saint Catherine’s life carved on them. You can also find that large baptismal of 16 th century used by Saint Francis Xavier to baptize numerous Goans who were converted into Christianity.

The main entrance of the cathedral has Latin inscriptions of Corinthian columns. Out of the eight chapels, two have ornamented perforated wooden screens. This filigree carving gives a royal look to the place. The Chapel of Blessed Sacrament is famous for decorated wall and ceiling painting. The arches of the altars are decorated with old paintings. You can also find many small statues, wooden figures and others.

Near the altar, you can find 18 th century’s organ, which is still in use. You can find an ebony stand, which is carved. It is the part of the old church over which the new cathedral was built. There is a convent closer to the cathedral, which is converted into Archeological Museum. It is open to tourists.