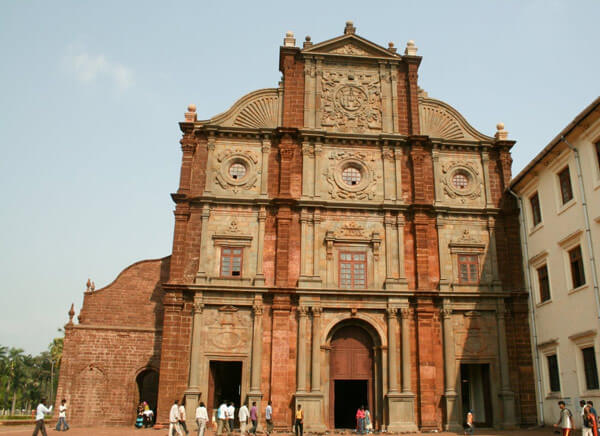 Basilica of Bom Jesus is a famous Roman Catholic located in Goa. It is one of the famous ancient Churches of the country and it is recognized as a heritage site by UNESCO.The term ‘Bom Jesus’ means the Holy Jesus. Do you know that this is the country’s most ancient minor basilica?

This basilica is considered as one of the seven wonders originated by Portuguese in the world. The work for this wonder started at the end of the 16th century by Dom Fr. Alexio de Menezes, a famous archbishop. This basilica was considered a landmark for Christianity in the country. St. Francis Xavier was one of the important figures who helped in spreading Christianity in the country. This church holds the earthly remains of the saint.

There is a small professed house inside the campus of this basilica. This professed house has history which dates even before the basilica. The story of the beginning of this church is quite an interesting one too. Dom Alexio, Loyola and others were behind the growing ‘Order of Jesuit’ in India. Right before the construction of this basilica, the senate and other major political heads opposed this order and stopped the construction of the church. However, the founders did not stop. They turned a small house in this region into church with the name ‘Jesus’ inscribed on their wooden door. They ran the bell the next day morning and opened their home as a church. The political opponents couldn’t legally destroy or damage this home-turned church. However, in the 17th century, a fire broke in the home and destroyed the site and it was rebuilt in 1783 with a spacious structure.

The basilica is built in red-laterite stone façade with a mixture of Doric and Corinthian architectural style. This ancient church’s floor is made of marble and is decorated with precious stones inlaid in it. The predominant element of this church is the glided golden altar and the rest of the church is intentionally kept simple. The statue of Ignatius of Loyola (friend of Xavier and co-founder of Society of Jesus) is sculptured in an upward posture of awe.

The holy table of the church, which is used during mass is also gilded and is carved with figures of Jesus and his disciples of the Last Supper scene. The table has an inscription that says ‘Hi Mhoji Kidd’. This is written in the ancient Konkani language of Goa and can be translated as ‘This is my body’ in English.

The walls of the church are decorated with vintage paintings of St. Xavier. The mausoleum of the saint holds a casket of silver with the earthly remains. The mausoleum was constructed over a period of ten years. The top-level of this tomb holds an art gallery, which contains many rare works of Dom Martin, Goan painter. The church has three levels. It has one main altar, two chapels, and a sacristy.

At the far end of this nave, you will find the main altar and two decorated small altars for Our Lady of Hope and St. Michael. The main altar holds a large gazing statue of St. Ignatius Loyola. To the southern side, you will find a beautiful chapel with wooden flora decorations and twisted columns. This chapel holds the relics of Xavier. You can also find paintings of the life of Xavier on the walls of this chapel. Right next to the chapel, you will find many portraits of various saints, a vaulted wooden door and others.

Also Read : Things to do in Goa

Open throughout the year: 7 days a week.

Special mass timing: special mass takes place in the St. Xavier chapel on the 6th of every month at 10 am.

On the other days, morning masses take place at 7 am and 8 am. In the evening, 6 pm mass is quite famous among religious visitors.

Holy hour: first Friday of every month at 5 pm

Scriptural rosary: every day except on feast days and Sundays

If you are looking for a good climatic condition to visit this church, winter is the most opted time for visiting Goa. Winter starts in November and ends in February. December is the most prime time to visit because of the festive season. The climate is cool, dry and pleasing during winter. Some tourists prefer to visit Goa during the early summer (March). Monsoon (July to September) is the worst time to visit.

This religious site is located in Old Goa, around 10 km away from Panaji, to the east side. The best way to reach the church is by reaching the Panjim bus stand (you can find buses and other transportation to the bus stand, with ease) first. From the bus stand, it would take 20 to 25 minutes to reach the basilica.

If you are visiting Goa via rail, you would be de-boarding the train at Madgaon Railway Station. This station is around 35 km away from the basilica. You can find buses from the railway station to the Panjim bus stand or, you can hire taxis directly to the religious site.

Apart from these, you can hire cabs or rent scooters from any part of Goa to this heritage site.