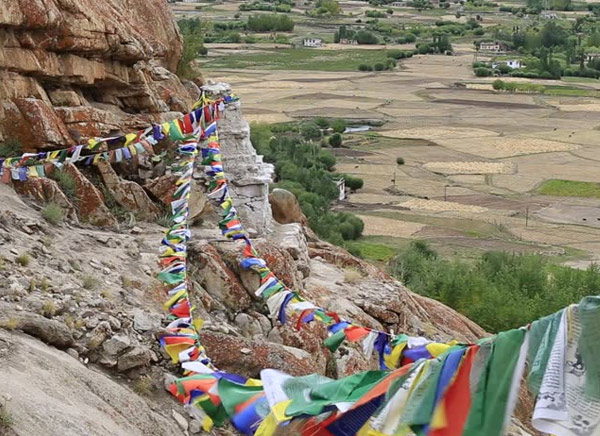 The Takthok, which is also called Thak Thak or Thag Thog is just one of the Buddhist monasteries and it is located in the village of Sakti in Ladakh. It is some 46 kilometers away from Leh and the name of the monastery translates into “rock roof” because the walls and roof are made completely of rock. It belongs to the Buddhist tradition of Nygingma from Tibet and there are some 55 lamas that live here.

It was founded during the middle of the 16th century during the time Tshewang Namgyal reigned. It is located around a cave that is in a mountainside. This cave is thought to be the same one that was used in the 8th century for mediation by Padmasambhava. The area that hosts the main temple is extremely gloomy and dark due to the residue from butter lamps that covers the rock ceiling. There is also another cave that was transformed into a kitchen that produces the food that is fed to those who pilgrimage here during the annual festival.

There are plenty of attractions that you can enjoy at Takthok monastery, including exploring the caves. The most popular thing that draws in tourists is the 108 volumes that the library holds from the teachings of Buddha, which are called Kanjur. There is also a new temple that was dedicated during 1980 by the 14th Dalai Lama. There is also a Padmasambhava based mural that is close to the throne along with another painting on the left side of Sakyamuni. There is also a cave chapel that is very popular along with another small cave that is believed to be the location that Padmasambhava resided as well as meditated for 3 years.

Not only can you explore the various caves, but you can also trek around the mountains that are nearby and enjoy the great view. There are also festivals that are popular and bring in plenty of tourists during the year and the cave kitchen is put into use at this time as well.

How to Reach Takthok Monastery

Since this monastery is only 46 kilometers from Leh the best way to get here is to first reach Leh. You can reach Leh by taking a flight, bus or train to the city and then you can get to the monastery by car. You can rent a vehicle or bring your own personal one, if you have driven to the area. Make sure that if you are renting a vehicle that you have one that knows the roads and that can take you there and back without any problems. If you want, you can also book a tour to Ladakh that will be able to bring you to the monastery and other nearby locations.

If you want to enjoy some of the festivals in the area, then you need to visit during the summer time, which is when the festival was shifted to for the tourists. The festival occurs on the 9th and 10th days of the Tibetan calendar’s 6th month and sacred dances are seen at this time. If you are interested in experiencing the culture of the area, then this is the perfect time, but there are plenty of other times when you can come as well. The summer is an ideal time to visit the area since there is longer day light and you will be able to experience the caves in their full form. The monsoons are not the best time to visit due to the rains, so make sure to plan your trip accordingly since the caves can flood.