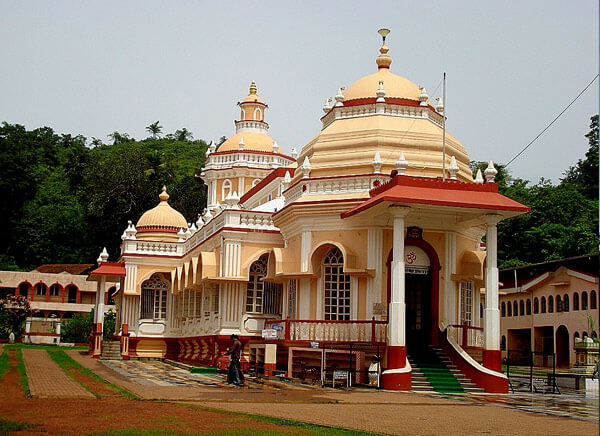 Shri Mangueshi Temple is situated in the Ponda Taluka at a place called Priol and houses the deity Lord Mangueshi, an incarnation of Lord Shiva the Hindu God of Destruction. Lord Mangueshi is recognized as Lord Shiva only in the regions of Goa. The distance of the Mangueshi temple from Panaji the capital of Goa is 22 km.

As per mythological tales, it is said that Lord Shiva had once visited the land distraught after losing heavily to his wife Parvati at a game of dice. As Goddess Parvati came looking for him, he tried to prank her by shape shifting into a tiger and frightening her. Seeing the predator in front of her, Parvati shrieked and prayed uttering the following words Trahi Mam Grisha, roughly translated this means “O Lord of the Mountains, save me”. Upon hearing her plea Shiva reverted to his usual form and returned to Kailash with her.

The area in Goa where all of this took place was later marked by constructing a temple, dedicated to Lord Manguesh. Shiva came to be known as Lord Manguesh due Parvati’s words Mam Grisha that remains associated with the land and the tale. The original location where the temple was built is presently the location of village Cortalim, located at the south of the Zuari River. It was during the Portuguese invasion that the deity was shifted Priol, where it remains till this day.

The history of the Mangueshi temple is significant in the context of the Potuguese invasion as this is one of the temples that were destroyed by the invaders in 1567. The Portuguese destroyed this temple when Salcate was added to their territory. This ancient temple was located in the village of Kushastali on the south bank of the river Zuari, the village was later named as Cortalim after the Portuguese conquests.

The Portuguese had destroyed the original temple in order to establish a church at the same ground, however the lingam of Lord Manguesh was immediately transferred to Priol where it is presently located. Kushastali during the Portuguese reign offered to be a terminal in the ferry route across the river Zuari, today also accessible when en route from the airport or from Margao (26 km away) to Panjim.

After its shift the deity was nestled amidst the palm groves at the valley and stayed there for almost four centuries. Later during the mid 18th century, Ramchandra Sukhtankar a notable general of the Maratha Court revived the lingam and convinced Raja Sonda to donate the land for constructing the temple and also offer funds for its maintenance. The estate of Priol since then could not deter the maintenance and reconstruction of the temple structure many times since the 18th century, due to the hefty endowments of Raja Sonda who surrendered Ponda to the Portuguese.

The main annual festival of the temple in held during the Magha Purnima, which is towards the end of February every year. The Ratha Yatra i.e. the pulling of the chariots, which is the main event during the festival, attracts thousands of pilgrims and tourists. During the festival the deity is decorated with a special royal look and taken around the village pulled by pilgrims on a chariot.

How to Reach Mangueshi Temple Complex

The most common route taken by visitors is a bus ride from the nearby Kadamba Bus Terminus which is located 21 km away. It takes about 2 – 3 hours of journey on frequently plying buses to the temple from the bus terminus. One can also avail a private car, cab, auto rickshaw and even a rental bike for the ride to the temple.

The temple is constructed as per quintessential Goan style of architecture and is a sight to behold. There is also a unique Deepastambha, which is a 7 storey octagonal lamp tower, painted white with golden arches. The figure of Nandi Bull regarded as Lord Shiva’s vahana or carrier, is yet another eye-catching aspect of the temple complex. The temple structure is especially beautiful at night when the lamp tower is illuminated as well as the main altar.