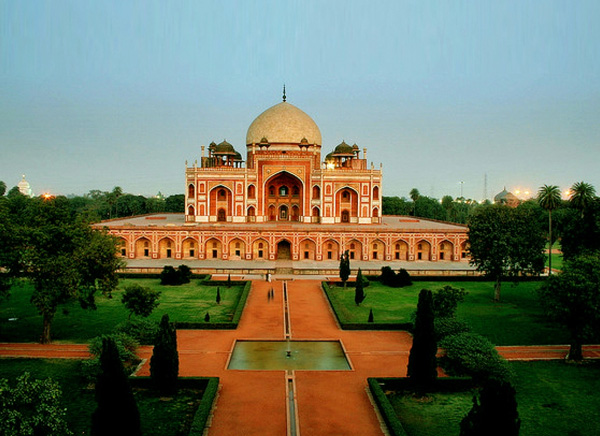 Humayun’s tomb or Maqbara-e-Humayun is the resting tomb of Mughal king, Humayun. This tomb was initiated by his first wife in 16th century. This is the first garden tomb in Asia and is a heritage site too. The tomb is not just one building of architectural value. The complex holds numerous monuments, tombs and other structures for exploration.

The complex has two gateways built with two storey’s found on the western and southern side of the complex. The southern gateway was the royal entrance, which is now closed to public.

The upper floor of the gateway holds a small courtyard. Enter through the western gateway to get to the mosque inside the complex. Near to the mosque, the tomb of Humayun’s favorite barber lies. It is called as the dome of barber.

The tomb is built with red sandstones, rubble masonry and marble. It is decorated with lattice screens. There is a plinth, which holds more than hundred gravestones.

The tomb of Humayun has a double dome, which is covered with white marble on the outer layer. You can find arches, latticework and other interesting Persian style architectural elements here.

Inside the tomb, an octagonal sepulcher is present with a cenotaph inside burial chamber. The head of the emperor is placed facing the Mecca. The real body of the emperor is located in an underground chamber right below the cenotaph.

Entry to the underground is restricted. On the walls of the tomb, inscriptions of Quran are found.

The tomb is located on a 30-acreland, which is divided into four by paved walkways, which are bisected by water canals. The squares created by walkway are developed into Persian gardens. On the northern side of the complex, a bath chamber is found.

The monument does not hold one tomb. It has a series of small monuments and tombs that lead to the main monument. There are many monuments, which were built before the Humayun tomb in the complex.

While entering through the gateway, you will walk through the Bu Halima garden and tomb. On the southern part of the complex, an officer tomb of a nobleman is found. The most prominent monument of all is the mosque of Isa Khan. It was built in 16th century and it holds the tomb of Afghan noble of Mughal court. It has a walled garden within its enclosure.

Right outside the complex, Nila Gumbad stands with its striking blue tiles. This structure is famous for its architecture, plaster decoration and others. Other interesting monuments are tomb of Muzaffar Husain Mirza, Bateshewala Mahal, Barapula and others.

How to Reach Humayun Tomb

The tomb is located at Nizamuddin East of Delhi. It is very close to the old fort. The tomb is easily accessible from any part of Delhi. The nearest railway station is Nizammudin and the nearest metro stations are Race Course station and Jorbagh station.

You can hire buses from ISBT or Rajiv Chowk or Nizamuddin to reach the tomb. You can also find autos and cabs from any part of the city to the tomb.

Summers of Delhi are harsh and dehydrating and thus, it is better to avoid summers. Monsoon can cause interruption to sightseeing. Thus, it is better to visit in the winter season when the climate is cool and pleasing. Winter starts in October and ends in March.

The monument is open throughout the day. Citizens of India, BIMSTEC countries and SAARC are charged INR 10 per head. Other foreign nationals have to pay INR 250 per head. Children up to the age of 15 are free to enter. No charge for camera or video camera.