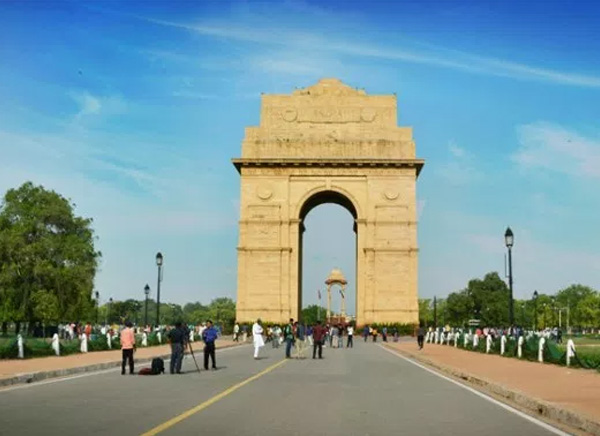 India Gate is a war memorial, which was initially named as the All India War Memorial. This structure is situated Rajpath region of New Delhi. Do not confuse it with the Gateway of India, which is located in Mumbai. This structure stands as a memorial to more than 70,000 soldiers who died in the First World War and the third Anglo-Afghan war.

The gate holds an inscription of 13,300 names of Indian soldiers, service men and UK officials. Later in 1971, a small structure made of black marble with a reversed rifle holding a war helmet on top was built under the arch. This structure is called Amar Jawan Jyoti.

The gate is 42 meter tall standing on a basement made of Bharatpur red stone. A shallow dome is open on the top of the wall, which was used to light the gate with burning oil.

A few meters away from the gate, you can find a canopy, which was built, similar to the pavilion of Mahabalipuram. This canopy stands as a memory to King George V who ruled India in the past.

A marble statue of the king in his royal robes and wearing the Imperial crown was inaugurated in the canopy and it was removed later.

How to Reach India Gate?

Once inside Delhi, you can easily find all forms of transportation to reach India Gate. There are direct buses that reaches close to the India Gate from various parts of the city. The nearest metro station to the India Gate is Central Secretariat located on the yellow and the violet line.

The best time to visit is between 7 pm and 9:30 pm. During this time, the structure will be illuminated. If you visit in the evening, you can find many street food vendors selling local snacks and delicacies.

If you visit in January, you ought to witness the parade that passes through the India Gate on Jan 26th, the Republic day.