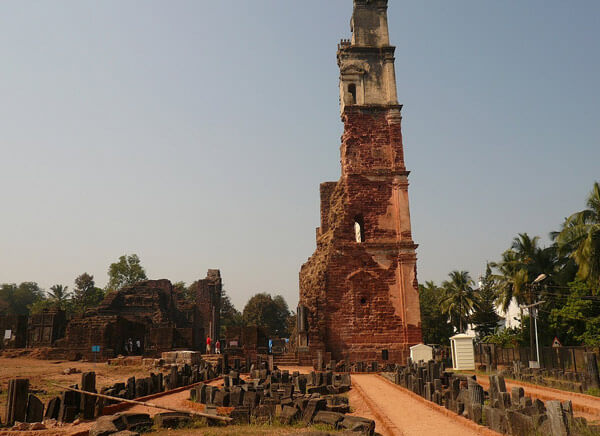 Church of St. Augustine was once a flourishing pilgrimage site, which has turned into a ruin with passage of time. This church is a part of UNESCO’s world heritage sites. This church was built in the early 17th century in the regions of Old Goa, India.

The construction of the church started in the late 16th century (1597). Augustinian Friars landed in the Portuguese controlled Indian region in 1587. Over the period of time, this team constructed three churches in the world including the Church of St. Augustine in India. In the early 19th century, the Portuguese government ordered the eviction of many religious groups and orders prevailing in Goa, as a part of its new policy including the Augustine order. Thus, the church was closed in 1938 and abandoned. There are no details about what happened to the Augustine order in India after the policy or where the group of monks of the church left. There was no subsequent management of the church premises and the building started collapsing in 1842 and by mid of the 19th century, the entire church became a ruin. The church bell from the Bell Tower of this church was shifted to another church in Panjim, Our Lady of the Immaculate Conception Church. Even today, you can find and hear the bell in this church.

By 1931, the façade of the church and almost a large part of its tower became crumbles. Today, the other half of the tower stands as a reminder of this amazing church and it has become an important tourist destination over the period of time.

Also Read : About History of Goa

According to ancient photographs, reports, and writings, the church is said to have a four-leveled structure with four towers surrounding it. After the construction, this was Goa’s largest church for a considerable number of years.The structure was built with red laterite and the height of the church was 46 m. An elaborate excavation has found that the church had four altars, a convent, and eight chapels.

This church was one of the 20 churches built in the Velha region in the past. These churches were constructed on or around the seven hills of Goa. Today, only ten of those have withstood nature and time. The Augustine Church was built in the Monte Santo region. The designer of the church is assumed to be an Italian. When the church was completed in the 17th century, it was called the Grand Nossa Senhore de Grace church.

Once you enter the church, you will find a rather tall altar with an arch and arched piers. You can spot the vestiges of these piers even today. A large choir region can also be identified in the remains and it is assumed to be a monk accommodation region. The vast nave of the church is open to the sky and you can find enormous barrel vault here. It is assumed to the be first site of collapse because the structure was not able to withstand the weight of the vault.

In 1624, Ketavan the Martyr was killed for refusing the orders of Shah Abaas 1 to deny her faith in the religion. The relics were said to be in Goa but, until the 1980s, the archaeologists were not able to pinpoint the exact location. The saint's bones were said to be stored in a black box. Later, in 2005, excavation for the bone started in this church site and fragments were recovered. A detailed DNA study proved that the remains belonged to St. Ketavan, the Martyr. Since 2016, Ketevan World Sacred Music Festival is conducted in the premises of this church.

What is there for tourists to watch in a site of just rumbles and crumbles? Well, ASI (Archeological Survey of India) has created a virtual reality frame, which creates a façade of the church based on the drawings and ancient material. Based on the viewers’ focus, the frame would show the side of the church in correspondence to the standing pillar.

As the name indicates, it is a music festival, which focuses on western music styles. The next celebration of this festival falls on 21st to 24th Feb 2020. This music festival showcases performances by bands, troops and solo singers from around the world. The festival is conducted after sunset, every day and it ends with a special program in the Immaculate Conception Church of Panjim on the last day.

The site is open throughout the year and the visiting hours from 9 am to 5 pm.

No entry fee is applicable to visit the ruins of this church.

The ruins are at prime beauty throughout the year. However, tourists prefer to visit during winter (November to February) for two obvious reasons. The first is the tourism element. The entire Goa will be at prime beauty during the cool and dry climate of winter. Tourists can enjoy water activities and other adventure activities apart from pilgrimage sightseeing. The second reason is the festive mood. Winter marks the time of Christmas, New Year’s and the Ketevan Sacred Music Festival. Thus, tourists visit Goa to enjoy a cultural vacation.

Early summers are quite pleasing (February to March). Beyond April, the temperature would be at its peak high with higher levels of humidity and dehydration. Thus, tourists avoid this season. Summer ends in June or by the beginning of July, which marks the starting of the monsoon season. Rainy season (July to September) is the worst season to explore Goa. Almost all tourism activities will be closed due to rough sea or unfavorable climatic conditions. Also, sightseeing is quite inconvenient when you are drenching in the rain.

How to Reach St. Augustine Church

The closest bus stand to the ruins is the Kadamba bus terminal, which is 8 km away from the ruin site. During the off-season, finding transportation from the bus stand to the site can be very rare and expensive. The nearest railway station is 27 km away from the site. Thus, it is not wise to choose public transportation to reach this church. You can find private cabs, rental cars or bikes from various parts of Goa to reach this church. Usually, tourists visit this site along with other religious sites like Se’ Cathedral (900 m away), Church of St. Francis of Assisi (0.8 km) and Basilica of Bom Jesus (1 km away).