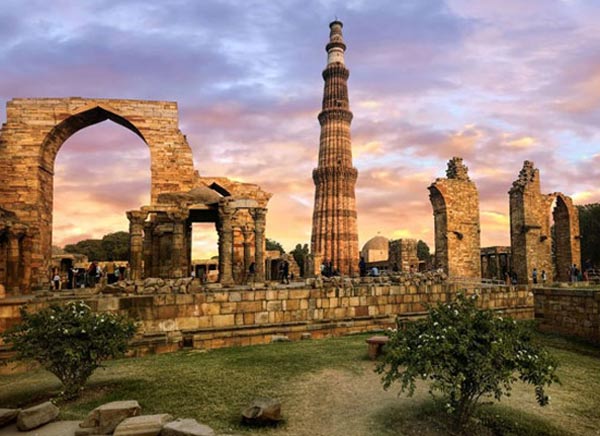 The first floor of the tower was built in 12th century. The second, third and fourth floors were built in 13th century and the last floor was completed in 14th century. There were attempts to add a sixth storey to the tower, which failed. This is the victory tower of Mughal, which indicated the beginning of Muslim rule in India.

At the foot of the monument, you can find a mosque, Quwwat-ul-Islam. This is the first mosque that was built in the country. The eastern gate of the mosque holds an inscription stating that the construction material used for building the mosque comes from demolition of several temples.

A long iron pillar stands in the courtyard. It is said that if one encircles the pillar with both hands (embrace the pillar), his wishes are fulfilled. Other significant features are inner and outer courtyard, graves, tombs, madrasa and others. The tourists are not allowed to climb up the tower, today.

How to Reach Qutub Minar

Qutub Minar is located in Mehrauli region of Southwest Delhi. You can easily find cabs and autos from any part of the city. You can easily reach the monument via local bus and metro. The nearest metro station is Qutub Minar station.

During tourism season, you can choose to ride the hop on hop off sightseeing bus tour provided by tourism department.

The monument is less untainted with season. The Qutub Minar is at prime beauty throughout the year. Delhi has very harsh summer, which is dehydrating and very humid. Thus, it is better to avoid summer season, which starts in March and ends in June.

The monsoon is pleasant but the city receives heavy rainfall making sightseeing, very uncomfortable. Thus, avoid monsoon season, which starts in July and ends in September.

The winter season starts in October and ends in March. The climate is pleasing and it is the tourism season of the country. This is the best time to visit the monument.