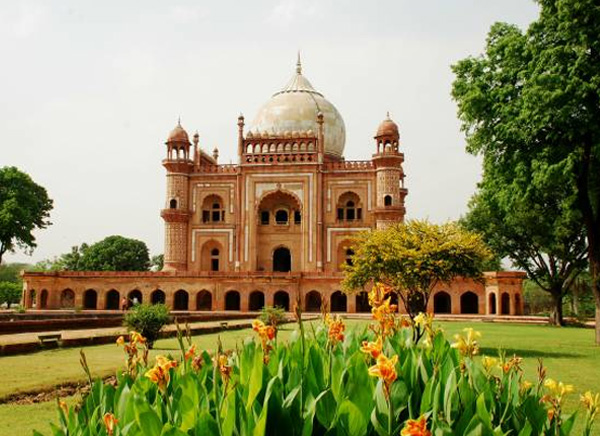 Tomb of Safdar Jang or Safdarjung Tomb is a garden tomb made of sandstone and marble in the 18th century. This tomb is the final resting place of Safdarjung, the prime minister of Ahmad Shah Bahadur's reign.

This mausol Nawab Shujaud, the son of Safdarjung, built this monument after the death of his father. This structure stands as the last Mughal styled garden tomb in India. Sadarjung was a small ruler of Awadh, under the control of Muhammad Shah.

After Shah’s death, he moved to Delhi to be the minister of Ahmed Shah and was promted to Prime Minister in 1748. Although Safdarjung served the king effectively, he was exiled from Delhi because of court politics in 1753.

He settled down in Oudh and passed away, the very next year. Safdarjung’sson plead for building a resting place for his father in Delhi and the king accepted. The constructed started and completed in the same year.

The monument has cliché ancient Mughal architecture. From a distance, the monument poses with the Mughal style dome with armed white and red-brown patterns. This tomb was planned to look quite similar to the tomb of Humayun.

The structure has three main elements – the mausoleum in the middle, nine-fold floor plan, and five-face façade. The main entrance to the tomb is ornamented and is in purple.

From the gate, you can get a grand view of the monument. The gate is an attraction by itself. It is two-floored and has many inscriptions on it.

Take a walk through the gate and you will find a small mosque to the right of the gate. The interior of the mausoleum has a rococo plaster coating, giving it a grand look. The mausoleum has four towers in a polygonal shape. An underground chamber holds the actual grave of the prime minister and his wife.

The ceiling of the monument is an intricate beauty with carvings and decorations. The main chamber is square-shaped and has a cenotaph in the middle. The façade of the monument is similar to the Taj Mahal but does not have the beauty of symmetry like the world wonder. The minarets and elongated dome structure resemble the Taj Mahal.

Just like many Mughal mausoleums, this mausoleum has a large garden, divided into four small square garden patches. These four parts resemble the four waterbodies of paradise. The garden is square-shaped and is quite similar to the garden of the Humayun Tomb. There are four water channels.

The monument is open throughout the year; 6 am to 9 pm

The best time to visit the Tomb of Safdar Jang is from October to March. This is the best time for sightseeing, as the climate is cool and pleasing. This is also the prime time for tourism in Delhi.

However, the monument is at prime beauty throughout the year. The worst time to visit the monument is from July to September. This is the time of monsoon and heavy rains are common in Delhi during monsoon. The lean tourism season starts in March and ends in June. This is the summer season of Delhi. Summers are hot, humid, and dehydrating.

However, this is the right time to get better deals in hotels and travel tickets.

How to Reach Safdarjung Tomb?

The tomb is located at the point where Aurobindo Marg and Safdarjung Road intersects. The tomb of Safdar Jang is a very famous monument, and you can find cabs and rickshaws from any part of the city to the monument.

Also Read : How to Reach Delhi