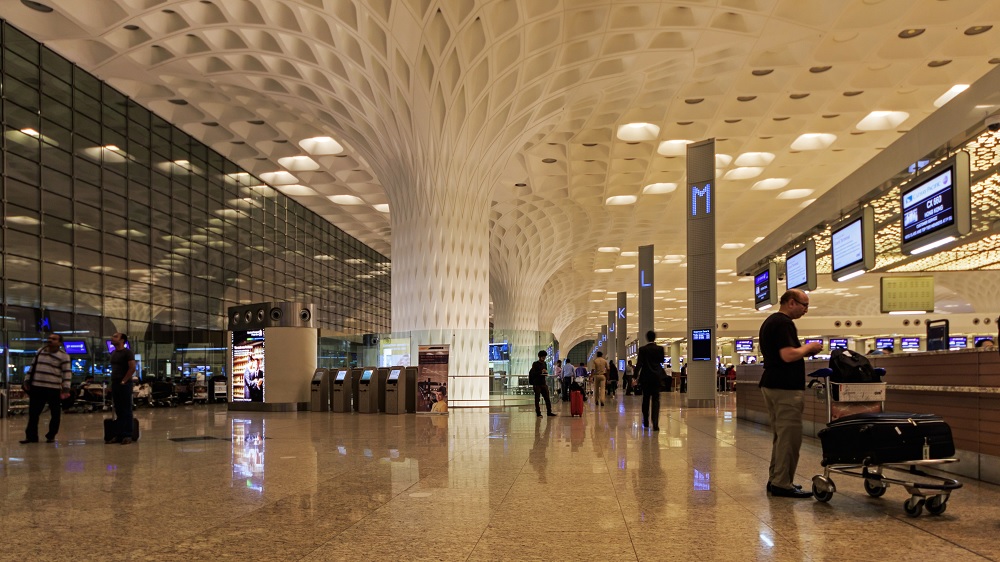 The Chhatrapti Shivaji Maharaj International airport is the primary airport of Mumbai metro area. It was called as the Sahar International Airport in the past.

With regards to the international passenger traffic and total passenger traffic, this airport ranks second in the list of busiest airports right below Delhi. It also ranks 14th in Asia and 28th in the world’s list of top busy airports. In 2017, with only one operating runway, it overtook the London Gatwick Airport in terms of passenger traffic.

This is one among the three airports in India which has implemented the A-CDM (Airport Collaborative Decision Making) to make sure that the flights land and take-off at the right time.In 2019, the airport received the award for Best Airport by Size and Region in ACI World.

This airport is formed as a joined venture of Airports Authority of India and GVK Industries Ltd. The private company took care of the modernization of the airport since 2006. The integrated terminal T2 was inaugurated in 2014 and started operating in the same year.

This airport is named after the prestigious ruler and independence fighter Chhatrapati Shivaji in 1999. In 2018, the term ‘Maharaj’ was added to the title.

The initial airport was built in 1930 and was named as RAF Santacruz. It was a dedicated airfield during World War II and remained a British controlled airfield until 1947. During this time, the airport had three runways and covers 610 acres of land.

Today, only a small part of this structure stands south to the runway 09/27 and is called as the Old Airport. This includes hangers, houses, aviation terminals and others.

In 1946, RAF gave the management to Director General of Civil Aviation for Civil Operations, who converted a few abandoned hangers into passenger terminals. One was used for international and the other was used for domestic traffic.

During its first year of service, it handled just 6 civilian aircrafts per day.

After Indian-Pakistan separation, the traffic to this airport rose to 40 flights and this made the Indian government to develop the structures with better equipment, landing system, radio range and others.

A new passenger terminal was also built in 1958. After independence, the airport was under the control of Ministry of Civil Aviation.

In 1979, the airport was shut-down temporarily due to a fire which killed three passengers. The airport remained closed for a month. Even after many developments, the airport had many operational capacity problems due to the jumbo jet popularity.

Thus, a new airport was planned to be built in 1970s and the Santacruz airport was entirely dedicated to domestic services. The new international terminal was completed in 1981 at Sahar at a cost of INR 110 million.

In 2003, the airport was fully modernized and the management department was left for tender. The bidding started in 2004 and GVK Industries won the bid and started to manage the airport.

Also Read : A list of International Airports in India

Both the terminals are at different locations and it would take 20 minutes to reach one terminal from other via any road transportation. For convenience, the MIAL operates private shuttle services between the two terminals.

The airport has two runways, which intersect with each other. One of the runways is upgraded to Code F. Code F is the name given to the runways, which can be used by larger aircrafts such as Airbus A380. During peak hour, to avoid congestion, both the runways will be operated simultaneously to operate 48 flights in one hour.

However, today, only one of the runways is used and the other is used as a backup runway. After a statistic analysis, it is found that using one runway is more effective than using both. There were also plans for creating a second runway, parallel to the main runway.

However, due to the sky-high cost estimate, the plans are in paper as of now. But, the parallel runway is considered to be an important element in the future extension plans.

India’s second tallest air traffic control tower is located in this airport. The tallest tower is serving at the Delhi international airport. This is a six storey building is triangular shaped. The structure has soft vertices. This unique architecture has won the award in 2009 Hong Kong Building Information Modeling. This tower started its operation in 2014.

This tower helps to the air traffic controllers to scan 8 km of the runway. The previous tower was too close to the back-up runway and thus, many international aircrafts refused to land in Mumbai whenever the back-up runway was in use.

Thus, the new tower was built at a cost of INR 4 billion.

Most recently, there were major modifications in 2000. This terminal has 11 boarding gates. The terminal also has Cerita buses which shuttle between the two terminals. This terminal is divided into 1A, 1B and 1C.

The roof of this terminal is said to be built with 20,000 metric tons of steel. This terminal is X-shaped and has four floors. There are new taxiways and apron regions to manage the traffic of 40 million passengers, every year. T2 is the newest terminal in this airport and it is connected with Western Express Highway via a six-lane Sahar Elevated Access Road.

This terminal has multi-level car parking, which can accommodate around 5,000 cars at the same time. This massive parking spot is managed by MLCP system of SKIDATA. There are 192 check-in counters in this airport, which allows 60 immigration counters for international departures and 76 for arrivals. There are 14 baggage carousels, 48 escalators, 75 elevators and 42 travelators.

Terminal 2 has GVK Lounge, the common luxury lounge, which is open to first class and business travelers. This lounge is the first of this kind in India. This lounge can hold 440 guests at the same time and it covers 30,000 square feet of area.

This lounge has a library, fine-dining region, smoking zone, business center, food and beverage centers, bar, spa, relaxation area, shower area and others. This lounge has won the 2015 award in World’s Leading Airport Lounge – First Class category at the World Travel Awards held in Morocco in 2015.

This terminal also has a star hotel, Nirata Airport Transit Hotel, which has 32 rooms. This is the first Indian star hotel inside an airport. This is located in the level one of the terminal and the rooms can be booked only the passengers who have checked into this airport.

The old airport ceased its operation in 2014 February and the new terminal started on the same day. The first flight to reach this terminal was Air India flight Airbus A330-200 running between Singapore and London, via Mumbai. The domestic operations started in 2015. There are 25 boarding bridges and 84 aircraft stands in the new terminal.

This is a private terminal operated by CSIA for non-scheduled private flights. It is located on the south-west to the airfield. This terminal is in operation since 2011. This is India’s first airport to have a self-sufficient terminal for handling private international and domestic flights. There are two lounges, two crew rest rooms, two conference halls and café bar in it.

This was located in the original Santacruz airport structure and was used for international and domestic services. Recently, it was remodeled in 2000 with modern features and facilities. Since Terminal 1A was shut down, the Terminal 1B was officially remained as T1 in 2017.

This is a new terminal built in 2010 at a cost of INR 3 billion. This terminal has 6 boarding bridges connecting 1A and 1B with this terminal. It covers a little less than 300 thousand square feet over three levels with a seating space of 900 passengers. The first level is for airlines and MIAL offices. The second level is for security hold and check-in. The first level is converted into a large food court.

Terminal 2 is located in Sahar Village of Andheri. The new airport terminal was built in the place of Old Terminal 2. This old terminal 2 was built in 1980 with three phases.

This was the first phase of this terminal and was built at a cost of INR 180 million. It served mostly international aircrafts with 5 aerobridges. These were the first aerobridges of the continent.

Later, this terminal was decommissioned and destroyed in 2009 to build the new Terminal.

This terminal was built in 1984 at a cost of INR 220 million. It was majorly used by Air India. It was decommissioned in 1999, when Terminal 2C was opened.

This terminal was opened in 1999 for Air India and Air India Express flights. It was used extensively until Terminal 2C was decommissioned in 2014 when T2 took over the entire operation. The terminal was demolished to make way for the new T2.

Every vehicle reaching Terminal 2 to receive arriving passengers will be routed through a multi-level car park. Parking fee is collected for all the vehicles to manage the traffic congestion. There are two classes of parking; general and premium classes.