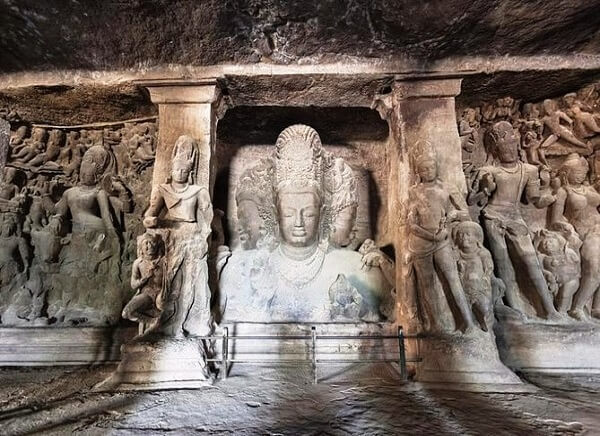 Elephanta Caves are a group of historic caves located in the Elephanta Island of Mumbai. This island is famous for its collection of ancient Hindu temples, sculptures, carvings and much more.

Elephanta Island is called Gharapuri, which means the City of Caves. This island is located around 10 km away from Mainland India. These caves belonging to the second century BC is an iconic attraction of Mumbai.

Apart from being an architectural marvel and sculpture sightseeing spot, this is the place where you can find synchronization of Hinduism and Buddhism. It is a cultural destination for those who love to relish the history of the country.

The island’s origin is still debated between Hinduism and Buddhism. There is evidence of settlement on this island dated back to 2nd BC.

The first settlers of this island are the Hinayana Buddhists, who were succeeded by Brahmans. This is the time when many Buddha stupas were erected. Later, during the 4th century or earlier, the Kshatrapas ruled this island and many coins of this era have been evacuated.

The recordings of the history of this island started during the Gupta era but, there are no recordings of the caves during that period. The existence of these caves has been recorded in works of literature of the 5th century and earlier.

Most of the scholars agree that the entire cave sculpturing would have been completed not later than 500 AD. The newest monument of the island is the iconic Shiva temple built by Kalachuri's reign.

After the completion of these caves, the heritage of this island spread around the region. Later, in the 16th century, Portuguese merchants took over the island and named it Elephanta Island, because of the giant stone elephant on the island.

The statue is now located in Jijamata Udyaan of Mumbai. It is said that in the 19th century, the statue was destroyed in an attempt of relocating it to the Victoria Gardens by British troops. It was later reassembled in the 20th century.

In the late 19th century, the fame of Elephanta Caves spread again and it became an important pilgrimage destination. The island was so famous among pilgrims that the British charged a tax on those who visited the island.

Later in the early 20th century, Indians protested the tax and the British waivered the taxes on three important Shiva festival days.

In the 1970s, the Indian government took the project of restoring the caves and in 1987, the site received UNESCO’s Heritage Site recognition.

The caves are cut from basalt rock. The temples of this island are positioned in traditional Indian mandala pattern. Most of the carvings of this island explain many mythologies of the Hindu religion.

The grand cave of the island has Persian inscription and it is believed that the Christian Portuguese destroyed a larger part of this island. Prior to them, these caves were damaged due to war and invasion by Mahommedans. There is also a theory that the Marathas destroyed quite a few major sculptures while trying to renovate them.

However, there is no definite proof for any of the above. Only a meager part of the sculptures remains today and the lifetime of these sculptures is also a questionable debate. Thus, make sure to visit the island while the caves are still at their current prime beauty.

The island is divided into two groups of ancient caves. The large cave collection has five caves and is located in the western hill region of the island. The cave 1 is the primary cave and it runs around 1 km deep. Caves 2 to 5 are located closer to the primary cave.

Cave 6 and 7 are located on the eastern hill area of the island. These two hills are connected by a man-made walkway. The eastern hill or the Canon Hill is famous for stupas and is also called the Stupa hill.

This cave is called the grand cave or the great cave. The interior of this cave is roughly a square with a mandapa in the middle. The square courtyard holds numerous entrances.

The main entrance is located with an opening facing towards the north and it holds a grand hall and a Shiva temple. This is the main temple of the island. The east-west entrance opens up sunlight to the temple. Top sculptures to spot here are Ardhanarisvara, Ravananugraha, Yogishvara, and others.

On the east-wing side, other deities of Hinduism can be seen like Kartikeya, Ganesha, Dvarapala, and others. The west-wing has a few sculptures of Lord Shiva.

This cave is located close to the shore. You need to walk 120 odd steps to reach the cave. Or, you can ride the toy train. The entrance to the cave holds four pillars, which open up to porticoes with an aisle on the back.

You can find similar columns inside the hall to uphold the ceiling. Each wall of this cave has many carvings related to the mythology of Lord Shiva or associated deities. The central main relief of Trimurti is located closer to the main entrance. There is an eastern sanctuary entrance, which is used as a ceremonial entrance.

The most important sculpture of this cave is the Trimurti statue of 20 feet high.

To the southern side of Cave 1, you will find a few more caves. Cave 2 is one of the unfinished caves of this whole island. The reason why Cave 2 was left unfinished is not yet known.

The cave holds many square pillars and a few sculptures. Cave 3 is located next to Cave 2 and it holds pillars, mandapa, porticos, chambers and one shrine, which is now in ruins.

You can find many carvings and sculptures along the walls of the cave. Cave 4 is in ruins now. However, you can spot relief, verandah, and remains of a Shiva temple. Cave 5 is completely damaged with no artistic remains and it is assumed to be unfinished just like Cave 2.

The largest cave on the Stupa Hill is the Cave 6. This is called the Sitabai temple. The cave opens up to a portico supported by four pillars. There is a three-chambered hall in the back of the portico.

The central chamber holds a large temple and the rest of the chambers are resting place for monks. This temple is assumed to be associated with Buddhism.

In the past, the central chamber was used as a church by Portuguese invaders. Cave 7 is a smaller cave that has a verandah and a few sculptures.

However, the cave was abandoned after the ancient sculptures found a flaw in the rock formation, which made the cave unfit for the sculpturing purposes.

The caves are open from 9:30 am to 5:00 pm. However, the first boat from Mumbai starts only by 9 am and it would take one hour to reach Elephanta Caves. The caves are closed on Mondays.

How to Reach Elephanta Caves

The Gateway of India jetty is the only way to reach Elephanta Island. The Island is not connected to mainland India. There is no airstrip in Elephanta Island. If you are choosing to travel via air, the Mumbai international airport is the closest airport to the island.

From there, you need to take a combination of road and water transportation to reach the island.

By Ferry : The ferry jetty is very close to Gateway of India. You can find vendors yelling ‘Elephanta’ at the top of their voice near the jetty. From the jetty, the boat ride is just 60 minutes away

By Train : Reaching Mumbai via train is a very easy way of commutation. You can find trains from all around the country to Mumbai, frequently.

Once you are inside Mumbai, you can find metro trains running throughout the city. The closest metro station to Gateway of India is the Churchgate.

How To Reach Elephanta Caves From Gateway Of India?

From any of the stations, the cost of a taxi ride to Gateway of India starts at INR 50 and it would be higher based on the demand. Very close to the Gateway of India, you will find a jetty.

Tickets to boats in the jetty will be sold by little boys near the entrance. Buy tickets and walk towards the jetty to catch the boat.

For a two way journey, the ticket costs

INR 180 per head for adults

Children below 2 years are free to travel.

You will find a boat every half hour. The ticket you purchased is valid for any boat. Thus, you need not wait for the boat that brought you to the island to take you back to the mainland.

How To Reach Elephanta Caves From Pune?

Pune is 162.5 km away from Elephanta Island. There is no direct public transportation between Elephanta Caves and Pune. The most comfortable option is to hire a cab from Pune to Gateway of India and from there, hire a boat from the jetty to reach the island.

The cheapest option is to board the train which will take you to Mumbai CST.

How To Reach Elephanta Caves From Bandra?

How To Reach Elephanta Caves From Colaba?

Colaba is just 3 km away from Elephanta caves. If you are choosing buses to reach Gateway of India, you can easily reach Colaba. Colaba has frequent buses from around the city.

The island is at prime beauty throughout the year. However, it is best to visit the monuments during the winter season (November to end of February). March to June is the summer season. The temperature is hot and humid.

If you are looking for a budget vacation to Mumbai, summer is the right time. The visiting time, fee and boat charges would not alter a lot with regards to the season.

However, air tickets and accommodations can be bought at a cheaper rate during summer. July to September is the monsoon season. Due to the vicinity of the Arabian Sea, the monsoon season provides considerable downpour.

Most of the water activities including the boat ride to Elephanta Island might be stopped during heavy rains. Thus, monsoon is the worst time to visit.

The best month to visit the island is during February. This is the month of the two-day Elephant Festival. This dance and music festival used to be conducted on the island in the past.

Nowadays, the festival is conducted in the Gateway of India due to the excessive crowd. However, a few of the events during the second day is conducted on the Elephanta Islands.

You can find numerous artists from around the city performing dance and music forms during this celebration.