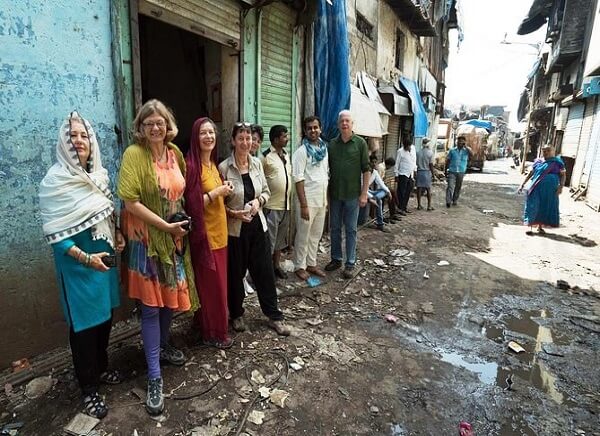 Dharavi Slum is considered as one of the world’s largest slum areas covering more than 520 acres of land. This slum is home to more than 700,000 people (some statistics say up to one million people), making it one of the most densely populated regions of the world.

Dharavi has residents from almost all over the country and thus, it is one of the most multi-cultural and colorful destinations you can find in Mumbai. Why would a slum be more popular? This slum has an annual turnover of more than USD one billion.

This is one of the most happening regions of Mumbai and a colorful tourist destination.

Dharavi is located between the two main sub-urban railway lines; The Central Railway and Western Railway. To the west of the slum lie Mahim and Bandra. To the north lies the Mithi River, this reaches Arabian Sea.

This slum was started by British during 19th century to create a residence for the industrial workers and for the migrating poor from the rural Indian destinations to Mumbai.

There are more number of Tamil people (People from Tamil Nadu) in this slum and thus, it is called as chotta Tamil Nadu (small Tamil Nadu).

In 18th century, this region was nothing but a mangrove swamp. By the beginning of 19th century, a few hundreds of Koli fishermen started a village in this region, named as Koliwada village.

Many low-income Indians started to settle down in Dharavi. To make it easier, British Government gave them 99 year lease in 1895. These people started small communities within them to build schools, mosques, temples, factories and others.

After independence from British, Dharavi was started to be utilized as a waste dumping ground. As Mumbai grew into an ultra-modern destination, Dharavi became its trash bag. Every political party that took over Mumbai gave out plans for developing Dharavi. H

owever, most of them failed. In 1960, Co-operative Housing Society was started in Dharavi by a social worker to increase the living standard of the residents of the slum. This society helped to build 338 flats, 97 shops and more.

Until date, many companies have come forward with numerous plans and proposals for renovating and rebuilding Dharavi with better standards.

However, there are oppositions from various parties including the residents of Dharavi, making all the plans stand-still.

Cost of a trip depends on the type of trip and the duration. The shortest trip would span for one hour and would cost around INR 500 to INR 1000, according to the service provider.

If you are choosing group tours (up to 6 people), it would cost INR 2000 per head for two hour to three hour trip. If you are planning a solo trip with a guide, it could cost INR 5000 to INR 7000. The cost of guide is included in this tariff.

If you choose to explore the slum without a guide, you can explore Dharavi without any cost.

It is best to choose a guide to explore this slum. Many Dharavi resident children are trained by a company to be tour guides. This stands as a way of income for these homes.

Dharavi is relatively a larger area for exploring on your own. Cost of a guide varies between INR 900 to INR 2000 for two hours of exploring. It is also possible to explore the region without a guide. Most of the families are welcoming.

Things to do in Dharavi Slum

Slum does not have a closing or opening time. If you are looking to enjoy the cultural life, it is best to visit when everything is up and running. Most of the tour operators provide trips between 9 am and 5 pm.

With regards to climate, monsoon is the worst time to visit the slum. Due to the low raise buildings and improper drainage system, Dharavi is very prone to floods during monsoon season.

Summer is very hot and humid in Maharashtra. Winter is the right time to visit Dharavi. Winter starts in October and ends in March.

How to Reach Dharavi Slum

Dharavi is quite popular among the local transport service providers. You can find autos, cabs and other road transportation to reach Dharavi from any part of Mumbai. If you want to travel via local train, get down at Mahim Junction or Kings Circle.

From these stations, you can walk or hire rickshaw to reach the slum. If you are planning to hire a bus, the nearest bus stands are Mahim Phatak bus station, Matunga Labour camp, Shahu Nagar and others. Top buses that travel to Dharavi are: