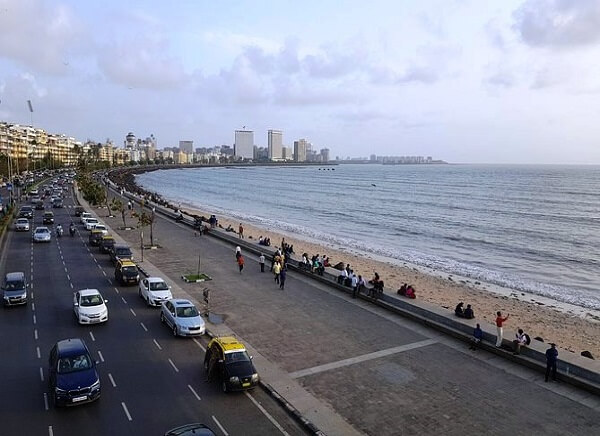 The Marine Drive is a long boulevard located in the southern part of Mumbai. This road was built by philanthropist Pallonji Mistry and Bhagojisheth Keer. This road is a C-shaped concrete road with six lanes running along the coast. This road connects Nariman point with Malabar Hill, along Babulnath. The Marine Drive is also called as Queen’s Necklace. The view of this road and the street lights during night would resemble a giant necklace with a string of pearls.

The Marine Drive is located in South Mumbai overlooking the Arabian Sea. The road stretches for 3.6 km

This road is officially named as Netaji Subash Chandra Bose Road but, most of the locals even do not recognize it with this name. This was not a major tourist attraction built in Mumbai. It was in fact, a failed project of 19th century.

The Backbay reclamation project of Mumbai started in 19th century and it was first tried out in 1920s. Under this project, 1500 acres of land was planned to be reclaimed but, government was able to only reclaim 440 acres of land. Even in that, 235 acres of land were allocated for military purposes.

Most of the land got tied up in other commitments and only 17 acres of land was left unused.

Eventually, the region became an attraction. For 72 years since its construction, it was sturdy. In 2012, resurfacing project was initiated for safety purposes.

Things To Do in Marine Drive

How to reach Marine Drive

Marine Drive is one of the top landmarks of Mumbai. Thus, you can easily find autos, taxis and other road transportation to reach this road. If you are choosing to ride the local train, you can get down at Churchgate station or Marine Line station.

Both the stations are located on the western line. From both the stations, it would not take more than ten minutes to reach this road, on foot. If you are driving a car, you can easily get a parking spot near the boulevard.

If you are planning to catch a bus, try from CSMT or Churchgate. Double decker buses are common from these stands to Marine Drive.