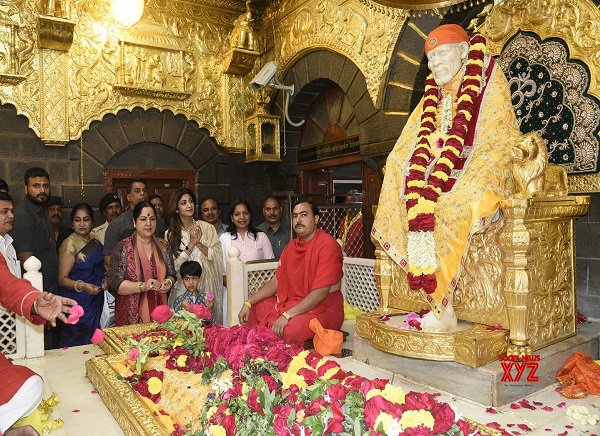 The temple of Sai Baba in the town of Shirdi is an important pilgrimage site. On average, the temple receives more than 25,000 devotees every day.

This town is said to be the home of Sai Baba, where he arrived in the mid of the 19th century and stayed there for 60 years. The temple is the resting place of his earthly remains. Today, people visit this temple for its spiritual beauty and serenity.

This temple is located in the town of Shirdi of Ahmednagar of Maharashtra.

Sai Baba visited Shirdi and stay back in the village teaching, preaching and praying for several decades. Upon his request, after his death, the villagers buried his mortal remains in a designated place and built the Samadhi Mandir on it.

A large marble statue of Sai Baba in sitting position is constructed right next to the Samadhi in 1954.

The temple holding his tomb was constructed at a large private house, which was built when he was alive. Sai Baba planted saplings around the home and watered them. The house was used as a rest home for the saint and it was built by a multimillionaire from Nagpur, Gopalrao Booty.

When the saint fell ill, he stayed back in the house and he was buried in the house, after his death. Later, the actual temple was built which was twice the size of the house.

Many changes were made to the temple over a period of time to accommodate the growing population.

Once you enter the temple, you will find a large hall filled with photographs of the life of Sai Baba and the temple. On the left to the hall, a small room holds memorabilia of the saint like his cooking utensils, stick and so on.

Walk past the hall, you will find the main idol and the Samadhi.

Right next to the temple, there is a large stone under a tree. It is said that Sai Baba used to sit on the stone to meditate and preach. A large portrait of the saint is placed on the stone.

A small lamp is kept burning since the construction of the temple. This region is called Dwarkamayee Masjid or Dwarkamai. This is the only religious site where you can find a mosque inside a temple.

You can find many items near the stone that was used by the saint. This structure has stone walls and an iron roof.

The temple complex also holds Chavadi which is a small platform under a neem tree. This is the place where Sai Baba rest, while he was alive. It is said that the leaves of this tree have a sweet taste.

This temple is the main pilgrimage site of the followers of Sai Baba. This temple holds his earthly remains, items that he used every day and other articles of his possession.

The marble is chosen for the deity to express that the heart of the saint was as white as the Italian marble.

Sai Baba never associated himself with any religion. He did not appoint any spiritual heir or disciple. However, there are numerous followers and disciples of Sai Baba, who were famous spiritual figures.

The Hindus and Muslims believe that Sai Baba belongs to their religion.

The temple is open from 4 am to 11:15 pm and the timings of special rituals are:

The temple is open to everyone for free of cost.

As mentioned before, the temple is open for all, free of cost. However, the queue would be very long, especially during religious celebration times. Thus, many people choose to book for VIP Darshans. There are two methods to procure VIP darshan tickets:

The temple is quite famous and thus, finding transportation to reach the temple is much easier, even if you are visiting during the off-season.

If you are traveling by air to Shirdi, the closest airport is Sri Sai Baba Airport, which is located just 15 km away from the temple. you can find daily direct flights fromDelhi, Indore, Chennai, Kolkata, Mumbai, Hyderabad, and Vijayawada.

From the airport, you can find many buses and cabs to reach the temple.

Shirdi is a little less than 84 km away from Ahmednagar. You can find direct buses (government and luxury coaches) from Mumbai, Aurangabad, Nashik and other destinations to Shirdi.

You can also find cabs directly to the temple from the surrounding regions. However, the traffic in the route would be heavy and the time taken would be longer than other modes of transportation.

The city of Shirdi has its own railway station, which receives trains from many major cities around the country including Delhi, Mumbai, Chennai, Hyderabad, and others.

If you are looking for a colorful time in the temple, it is best to visit during any festival like Diwali, Dussehra, Gudi Padwa, Guru Purnima, Holi and others. The September and October months hold the maximum number of festivals.

If you are planning to visit and enjoy the serenity of the temple without crowd, it is best to visit on Wednesday, Monday, and Tuesday. Especially between 12 noon and evening, there will be only a handful of people inside the temple. If you are visiting for special rituals or on auspicious days, visit during Wednesday night or Thursday.

On Thursdays, his photograph is taken on a palanquin around the city from the temple for devotees to pray to the photograph and the procession returns back to the temple.

When it comes to climate, the place is hot and humid in summer and, inconvenient for sightseeing in monsoon. Thus, winter is the best time to visit the temple. Winter starts by early October and ends by March.

There are numerous hotels, guesthouses, and lodges around the temple. The temple also has a few rooms for accommodation.

However, the availability of those rooms are quite questionable, especially during special days. The accommodations have to be booked at least a month before your visit. An AC room inside the temple complex costs INR 900 and the non-AC room costs INR 200.

Special Festivals To Enjoy in the Temple

Almost all festivals related to Lord Vishnu and other Hindu festivals are celebrated with bliss in the temple. However, the best of all celebrations are the three main festivals namely, Ramnavami (March or April), Vijayadashami (September) and, Guru Purnima (July).