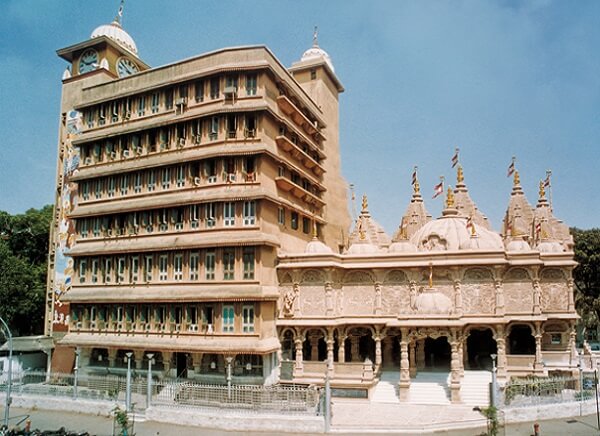 Shri Swaminarayan Mandir is more than a century-old Hindu religious site holding Laxminarayan Dev (Lord Vishnu) and Gaulokvihari (Lord Lakshmi) as the main deity. This temple is not just an important pilgrimage site for Hindu. It has also altered the culture of the region in many ways.

Do you know that the flower market closer to the temple, Phool Galli started because of the huge demand of flowers in this region by a few temples in the region along with Shri Swaminarayan Mandir? Hindus offer flowers tied as a garland as a main offering to deities.

This temple has been a part of Mumbai since 1868. RanchhoddasPranjeevandas, a pious man demolished and re-built his own residence to create a temple. He installed three deities namely Hari Krishna Maharaj, Radhika, and Gaulokvihari.

Later, in 1903, the current structure of the temple was built and two more deities were included namely Lakshminarayan Dev and Ghanshyam Maharaj.

The three spire structure is easily notable from around the temple. The temple structure starts with 25 steps leading to a large audience hall, where you can find statues of Lord Ganesh and Lord Hanuman.

On the walls of the temple, you can find many paintings related to the childhood and stories of Krishna.

There are more than 109 caves in this collection which were used between the 1st century BC and 11th century AD. Interestingly, almost all the caves have a small plinth made entirely with stone. It is assumed that the plinth was used as a bed.

Many caves hold large congregation hall supported by mammoth pillars. These are Buddhist shrines, which were used for religious and spiritual purposes. The caves, which were used as monasteries have beautiful reliefs of Bodhisattvas and Buddha.

Among the 109 caves, here are the top caves of importance.

Top festivals to enjoy in this temple are:

Any festival related to Lord Vishnu is celebrated with cheer in this shrine. Apart from this, you can find many religious activities every month.

No entry fee for the temple. However, if you are wishing to perform rituals, special tokens have to be brought for specific rates. Apart from these, people donate money to the temple and it is not a compulsory act.

How To Reach Kanheri Caves

This temple is located in the Bhuleshwar region of Mumbai city. Once you are inside the city, you can find buses, cabs, and local trains to the temple from any part of the city.

If you are traveling to Mumbai, Mumbai is well connected with all major parts of the country and many important international destinations.

Mumbai holds an international airport that connects the city with all major cities of the country and many international destinations. The airport is just 21 km away from the temple.

You can find government buses, luxury coaches and cabs from various parts of the country to Mumbai. The availability and cost of these services vary with time (more buses during the tourism season).

From the station, you can find cabs and buses to reach the temple.

The best time to visit the temple is during any festivals. Within a day, it is best to visit during any religious ritual.

If you are looking for the right climatic condition, it is best to visit the temple during the winter season. Winter starts in October and ends in February. This season has a calm and pleasing climate allowing you to enjoy sightseeing with ease.

Monsoon brings tremendous rainfall to Mumbai and thus, it is best to avoid it. Rains start from July and ends in September.

Summers are hot, humid and de-hydrating. Thus, if you cannot withstand Indian heat, it is best to skip summer. Summer starts in March and ends in July.