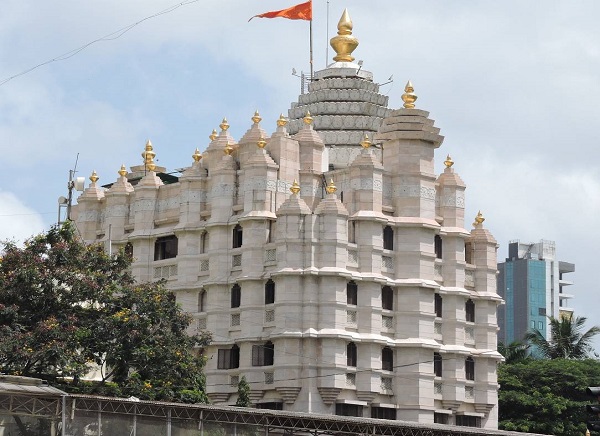 Sidhivinayak Temple or the Shree Siddhivinayak Ganapati Mandir is an important temple and a tourist destination in Mumbai. This temple is considered to be one of the richest temples in the world.

Apart from the Elephant God, Ganesh, this temple also features other Hindu Gods. This temple is visited by many pilgrims and even Bollywood people during special religious celebrations. The term Sidhi Vinayak means Lord Ganesh who grants wishes.

The temple is located in Prabhadevi region of Mumbai.

This temple was built in 1801 by Laxman Vithu and funded by Deubai Patil, wealthy agri women. When it was built, it was as small 3.6 meter square structure of brick with a small brick dome. It is said that Deubai Patil was childless and she wanted to build a temple for the god that grants wishes so that women like her could benefit.

Later, Akkalkot Swami Samarth, a Hindu Guru ordered the king of the region to bury two idols in front of the temple. He also mentioned that after 21 years, a Mandar tree will grow on that very same spot and today, you can see that tree inside the campus.

The temple has been a major pilgrimage destination since the 1950s. Now, the temple receives more than INR 100 million every year, in terms of donations and trust funds. The god in this temple is said to grant wishes easily to those who believe in him.

Each day, seven different rituals are conducted methodically at specific timing based on the day of the week. Purity of the premises is maintained with high priority. During religious celebrations, you can find additional rituals and celebrations conducted for specific reasons.

This temple complex includes the main shrine, rest house, living quarters and a lake, which was built during the beginning of 19th century.

By the mid of 20th century, a Hanuman temple was built in the complex. An idol of Hanuman was found while digging Elphinstone Road for expansion. A shrine was dedicated to Lord Hanuman inside the temple.

The main idol of the temple is a large black stone sculpture of the Elephant God, with his trunk curved to the right. This is quite a unique style of Lord Ganesh, when compared to others. The idol is also given three eyes, like Lord Shiva.

The original structure was of ancient style architecture will a simple hall, inner sanctum and an open space around it.

When the temple was re-built, they took inspiration from the Lord Shiva temple of Ambernath. The idol was kept intact in that position and the structure around it was rebuilt with a six storyed building. The domes were gold-plated and the inner sanctum was built with unique designs.

First Floor – This is the main floor for darshan and religious Pooja activities.

Second Floor – This is the temple kitchen floor and also has a restroom. The food prepared in this kitchen is taken to the inner sanctum via an elevator. This floor also has an administration room.

Third Floor – This is the central office of the temple with member chamber, conference hall, computer room and others.

Fourth floor – This is the library of the temple with more than 8000 books on religion, engineering, medicine, literature, economics and others. The library is open to students and is constantly updated to incorporate more study materials. There is also a study hall in the library. The entire process is free of cost for the public.

Fifth floor – This is a grand kitchen for festival preparation. The floor once had a solar heater and now it is moved.

Sixth floor – This is the summit of the temple and it holds numerous crowns and a big dome.

The main crown or dome of the temple is considered to be the epitome of power and divine presence. The pilgrims who are not able to see the idol would offer their prayers to the main dome.

It is best to visit during special rituals. Every day seven rituals take place and the timings slightly vary on Tuesdays alone.

Naivedhya – food offering starts at 12:15 pm and goes on for 15 minutes

Aarti Evening – The evening prayer starts at 7:30 pm and goes for half an hour

Shej Aarti – bed time ritual starts by 9:50 pm. After this ritual, the temple will be closed and will not be opened for any reason before the next day’s kakad Aarti.

However, if you are booking for special rituals to be conducted under your name, you need to pay.

For foreigners and NRIs:

Framed photograph of the deity – INR 350

All bookings have to be done at least three days in advance.

Tuesdays are the most-crowded days and thus, it should be avoided if you want a peaceful visit. Visiting during rituals would give you a better exposure to the culture of the land.

The best time to visit is during any religious celebrations like Vinayak Chaturthi, Sankashti Chaturthi and others.

Best time of the year is the winter, when the place is cool and dry. Winter starts in October and ends in March. During summer, Mumbai is considerably hot and humid. Monsoon can bring loads of rainfall and thus, it should be avoided.

How To Reach Siddhivinayak Temple

You can choose to ride the train, cab, bus or other road transportations to reach the temple. If you are choosing local trains, you need to get down at Dadar Railway Station.

If you are choosing buses, you need to get down at Prabhadevi or Dadar stand. From the bus stands, the temple is 2.5 km away and you can find cabs to reach the temple.