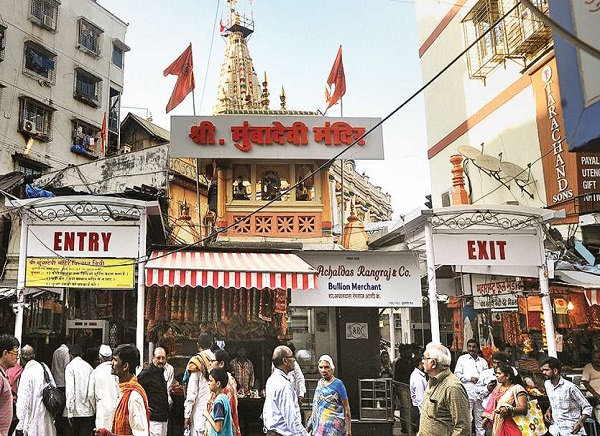 Mumba Devi temple is one of the oldest temples in the city, which is dedicated to a local deity, Mumba Devi, a reincarnation of Goddess Parvathi or the Mother Goddess. The term Mumba dates back to Marathi, which indicates that this goddess has been in the culture since the 15th century.

You can always find womenfolk in this temple performing rituals and offerings.

This temple is located in South Mumbai in Bhuleshwar Region.

The temple was built in 15th century in BoriBunder and was destroyed in 18th century. The actual reason for the destruction is unknown and thus, it is assumed to be wear and tear.

The Goddess Mumbai is considered to be a patron of the salt collectors and fishermen of this region. They were one of the original settlers of the islands of Bombay. This temple is dedicated to Lord Parvathi who was reincarnated as a fisherwoman named Matsyaa or Mumba.

She dedicated herself to the welfare of the fishermen and mastered the skills of concentration and perseverance. When Lord Shiva came down to earth to marry her, the fishermen requested her to stay back.

According to legends, this is how she became the village goddess. The locals called her aai, which means mother in local Marathi language. Thus, she was called as Mumba Aai, which was gradually became Mumbai, the name of the city.

There is also another legend of Goddess Parvathi appearing as an eight-armed goddess to kill Mumbaraka, an evil demon. After being defeated, the demon requested for forgiveness and built a temple in her name.

The main idol of the goddess is decorated with silver crown, nose stud and a golden necklace. The idol ironically has no mouth. You can find other statues inside the temple representing other gods and goddesses of Hinduism.

The temple is built in classic ancient Hindu architecture and has one towering spire at the top of which, a red flag always flies. The exterior of the temple has many carvings of expert artisanship.

The temple is located in a prime market region named Zaveri Bazaar. This street market is famous for copper accessories, religious items, incense, saffron and others.

Crawford market is also closer to the temple. Chowpatty Beach and Marine Drive are the other attractions to try after visiting the temple.

The temple is usually closed on Mondays, unless there is a special occasion or celebration. The timing might vary during special festivals and occasions.

There is no entry fee for the temple. Donations are welcomed but, not compulsory. Visitors of different creed and religion can visit this temple.

Photography of any kind is not allowed inside the temple. Pilgrims usually buy pink lotus, orange marigold or jasmine flowers to visit the temple, but it is not a compulsion.

The temple time to visit is during any local festivals like Navaratri. For the nine days of Navaratri, special ceremonies and rituals will be conducted. Many music programs will be organized too.

In general, winter is the best time to visit Mumbai. Summer can be hot and humid causing troubles to explore the region with ease. Monsoon brings strong wind and heavy rain.

Thus, most of the tourists avoid rainy season too. Winter is pleasing and cool. Winter is also the time of Navaratri celebration. Winter starts in October and ends in March.

If you want to stay back for the main ritual:

How To Reach Mumba Devi Temple

It is quite easy to hire auto rickshaw or cabs to Mumba Devi temple, from any part of the city. If you are choosing local trains, you can get down at Charni Road station or Churchgate station. Charni Road station is the closest of all and is ten minutes away from the temple.

If you are visiting from a foreign country, you can easily find flights to Mumbai. Mumbai has a busy international airport that connects the city with numerous international destinations and almost all the domestic airports.